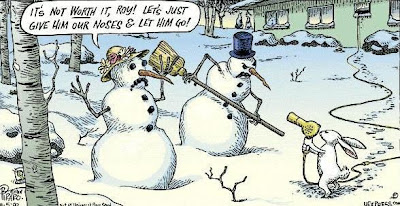 It was another bleak, dreary, partly rainy day. Not cold, but just not nice to be outside. 50's is too chilly for Bobcat to go on the porch. No, we didn't have snow.

While I was waiting for the rain to stop so that I could go into town, I emailed back and forth with a friend in San Antonio about the RV's we had found. I mentioned that I thought I would also like a high top minivan, and asked him to keep an eye out for one. He suggested Auto Trader, so I searched on there for a while. I hunted in Craigslist, eBay and some other places, and only found one in my price range, and that was in FL. So then I started looking for ones without the high-top. The Puddle Jumper is in the shop getting fixed now, but I know I need to replace it, eventually. 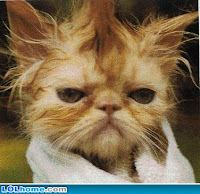 The rain slowed down, so I went to town. I got most of the things I needed, and got a good walking work-out in the two stores I went to. My main reason was to get cat food and litter.

Snack was begging at the grooming room door to come in the house, so I let her in here. She gets so tired of the Energizer Bunny, Pepper, wrangling with her all the time. Now she is hiding under my bed, so I will have to get her out.
My SPCA boss called and these foster cats are scheduled for shots next week, and then medical check-ups and neutering a couple of weeks later. We think that Snack is already spayed, but she will still have to have a check-up before she can be adopted. "Orange Glow", the outside cat who is a 'come-along-and-stayed' will get his second shot too, and is scheduled to be neutered with the others. She is bringing a dog house for the poor dog down the street who has been tied to a tree through all this wet and cold weather.
Sandra made a comment yesterday about the Breast Cancer clicks that are on the Animal Rescue site, and I noticed that there are clicks for other things too. So I have been clicking on all of them now. If I can help someone else, and it's free, I can at least do my part.
Tomorrow is supposed to be a better day.

Posted by LakeConroePenny,TX at 7:07 PM