When I got up and opened the blind to the porch patio door, I turned on the light, it was only 40 deg. out there. So Bobcat had to sit at my bathroom window to watch dawn break. Later when the sun warmed up the porch she lazed in it for a couple of hours.

As Debo didn't seem too anxious to go out to do his thing I waited until I was dressed and it was light outside. He had been stepping all over my covered trough of aloe vera to get to the hedge side to eat any greenery he could find there. So it is time to add green beans to his diet, until the good food takes hold and gives him the minerals and vitamins that his system craves. Peas will do, but 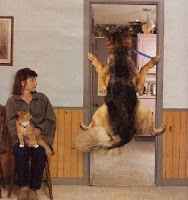 they seem to prefer green beans. I mixed some in with his breakfast, and he just ate it all up.
I had to go back to the next town to Petsmart, as I hadn't stopped there yesterday to get dry cat food. As Debo is so hard to get into the carrier, I thought it would be good to show him that carriers means 'going good places'. Getting him in the carrier is like this dog in the picture.
I had the carrier in the front seat of the truck, as it was too cold to put it in the back. He walked around Petsmart in awe, and just loved it. I spent some time in Petsmart, as this was really a training thing. I studied the ingredients listed in the different brands 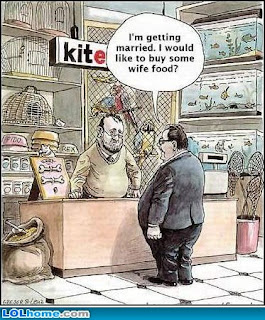 of dry cat foods, but went back to the one that I had given them before, as it seemed the best nutrition bang for the buck.
When we left there he was a little easier to get in the carrier. When we got back here I took him straight down to the field at the lake. I had my retractable leash with me, so I let him chase around and around. I got my exercise in, too. He had a great time, and was even better about getting in the carrier. I have a feeling that he has been locked up for excessive periods of time during his short life, and that is why he is so afraid of being put in a carrier. But he has never growled or tried to bite me when I have struggled with him. He has to be acclimatized to everyday life with a forever family, not just being tied to a tree and being ignored.
His system still isn't used to being fed regularly, and eating grass and green leaves is what animals do when they feel they have upset tummies, so I gave him some medicine for that, as well as the green beans.
I am not crazy about having to walk a dog in the cold, but I took him in, and I am going to do my best for him.
So it was a doggy day.
Posted by LakeConroePenny,TX at 4:22 PM