Adoption Day. Missy has an Application!

It was a nice day today, not cold to use the heater, nor hot to use the AC. 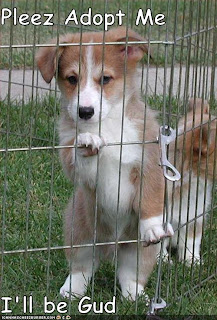 My mission for today is to take Pepper the black kitten, Missy the tortoiseshell longhair cat, and Debo the black Belgian Sheepdog to Adoption Day. Snack and Bobcat would be the only ones left here. My SPCA boss wants to get Snack checked out by the vet before she is offered for adoption. Jay wanted to go with me, as he had some errands to run. I took Debo with me to pick up Jay, so that he could run around down there. Their neighbor let Debo into his fenced yard so that he could run around, off leash, with his little dog, Muffie. They played so nicely, Debo will make a lovely pet for some lucky family. Back here, Jay went up to my attic and got carriers down for the cats. Debo would have to ride in the front seat in the truck, as there wouldn't be room for a carrier for him, and Jay, so Debo was in a seat belt harness, and just loved the ride. He sat straight up looking at everything. The cats were in their carriers, seat-belted in the back seat.

We had to leave home early as one of Jay's errands was to be at the Post Office before it closed at noon. The cages at Petco for Adoption Day had been set up the night before, so we got my three animals situated quickly. Debo was quite content being on display, and loved all the attention he got from passers by in Petco. We had to wait for another foster mom to arrive, as we couldn't leave the animals there unattended. 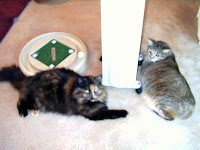 Missy and Bobcat this morning, each side of a radiator.

While we were waiting, a guy absolutely fell in love with Missy, and filled out an application for her. He held her, and she snuggled up to him. He liked her because she is quiet and loving. His application will be reviewed and checked out early next week. She is due to go to the vet on Tuesday for her check-up, so she should have a new home by the end of the week. She is the one that I will miss the most, out of this batch of animals.

As soon as there were a couple of SPCA volunteers there, Jay and I could leave, and do some more errands. Couple of banks, and WalMart, which was packed. I don't usually do WalMart on a Saturday afternoon, now I know why! Jay was getting antsy, and so I brought him home. We did stop at Krogers to get gas and a few things, so I found a few more bargains, like 1/2 gallon of milk for $1.50.

Now I have to drive back to Conroe to pick up my fosters at Petco..

Later at 6.30 PM:
When I got to Petco, I found out that little Pepper is adopted. A lady who is already pre-approved by SPCA to adopt, came to look at a tabby cat, and chose Pepper instead. She will be able to take him home after he is all better from his neutering surgery.
I got them all back in their carriers in the truck, drove back, got them settled in the house, and fed them their dinners. I went next door to tell Ray and Shay, as they found Pepper abandoned at the Kroger's dumpster. I was talking to Ray's witch-cat, Zeeda, I know not to try to pet her, and she suddenly jumped up and gaffed my hand, right on the vein, so I bled all over their floor, until we got it stopped.

A bloody good day.
Posted by LakeConroePenny,TX at 4:33 PM

This is only the second time I've ever heard of witch cat. We had one of those. You'd be sitting watching TV and it would come behind the chair, jump from the floor and bite your ear. It would also attack your legs when you're walking through the house. We finally had another family take it and they kept him outside. Attack cats.