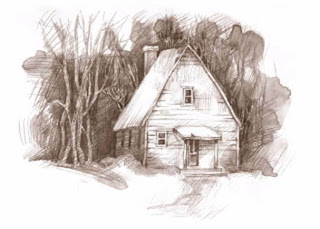 I found this beautiful winter poem and thought it might be a comfort to you. It was sent to me and it's very well written and I hope that you enjoy it too.
' WINTER ' by Abigail Elizabeth McIntyre
""Sh.. It's Cold ""
Now isn't that well written?

It was 27 deg. this morning when I got up, so I waited a while to take the dog out, but we ventured out about 6.40AM. Today is his second day of de-worming, and as he can't eat for two hours afterwards, I wanted to get him out, back in, and medicated as early as possible. I wish he would hurry up and do what he has to do when he is outside. I don't pet him until he has, as I want him to attend to business first. This is part of his training. As soon as he 'goes', then he gets lots of petting and attention. The spoonful of green beans mixed in his food have stopped him from eating grass.
This is Blackie-Marie, Shay's cat, who is outside 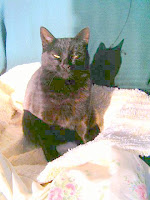 during the day, and in their utility room at night, as Ray's cat, Zeeda, won't let another animal in my guest house, next door, that they rent from me. 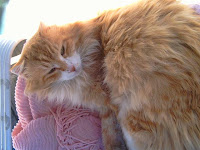 The other one is Orange Glow, who has been living here for a while, and considers this his home. He is Shay's favorite. He was so skittish and afraid, when he first came here, but now he is a gentle loving cat. Unfortunately, he doesn't get neutered until the end of the month, so he still spends a couple of days away from home, and worries us all to bits, until his return.
Other than taking care of the critters, grocery shopping, and cleaning house, nothing of import went on today. I hadn't felt well yesterday afternoon, and went to bed early, but I feel better today.

A sunny, but chilly day.
Posted by LakeConroePenny,TX at 5:03 PM