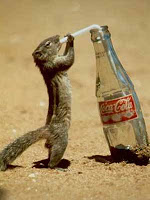 It started out at 27 deg. and only gained 30 deg. during the day, but the sun was out in the afternoon, so Bobcat could go out on the porch for a while. This warm, then cold, weather is enough to make you squirrelly.

First thing, after giving Orange Glow his medicine, I spent some time on the phone, and online, tracking down a feeding syringe for Snack. The ones at Petco looked too small, but the vet had a larger one, so that was the first stop.
Then Jay and I went to the church's thrift shop, but nothing caught our eye. As we had to go near the Unique Thrift Shop, operated by the county for emergency programs, we went in there. I bought a nice long wooden

storage thing to screw on the wall of the motor home, and a brand new funny looking kitchen pan. Round the corner to Target to see if they had any small cordless phones that aren't complicated. Also looking for a tiny flat screen battery HD TV. Nothing there. I want to be prepared if we have any more power outages.
After a stop at Petsmart to return some food that the cats didn't like, and buy some more Royal Canin food for Bobcat, a quick stop at Krogers, and home. I had noticed that Bobcat's fur and energy

level was so much better when she was eating it, and she kept on asking me to buy Royal Canin again. I had bought her something different and she would pick at it. If I put food in her dish that she doesn't want, she will sit there and look at it, and then me. Smart cat, she has her human trained.
I washed the little hinged pan with handles on the bottom and lid, that I had bought today, beat an egg, seasoned it, and cooked it in the shallow bottom of the pan. Then I closed the flat lid, and warmed a whole wheat tortilla, with a slice of cheese on it, on the top of the lid. I moved the cheesy tortilla onto a plate temporarily while I turned the egg, and I warmed some thinly sliced 98% fat free ham on the egg. Rolled it all up, and it was good for lunch. I can see lots of uses for that little pan, even though I don't know what it was for originally. As the flat lid is the size of a tortilla, I expect it has something to do with them.
I mixed up some good canned cat food and water, shaken in a baby food jar, warmed for 10 seconds in the micro, and got some down Snack a lot better with the feeder syringe. I had also bought a bag of the cheap brand of food that came with her, and she ate a few bits of it, too. As long as I can get good canned food down her too, it will be alright for now. She has an appointment at the vet tomorrow, if she doesn't improve, and use her box.
No work today.
Posted by LakeConroePenny,TX at 7:34 PM