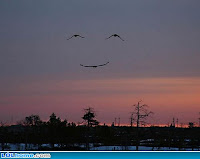 Here is a smile in the sky:

It was 60 deg. on the porch this morning at 6.00 AM. Bobcat could go out there to watch the sunrise, while I drank my coffee and tended to mail. I turn the pot on as soon as I get up, and put all the refrigerated cans of pet food on the counter to warm up a bit, before I give them their breakfasts.

I was expecting the new dog to be clamouring to go out as soon as he heard me stir in the house. Mindi's dogs do, but he laid there watching me through the glass door, wagging his tail. I know it must have felt good to him to sleep in a nice soft bed, and he seemed to appreciate it.

I had given him all the dry dog food that I had yesterday when I brought him here. But I knew that my SPCA boss, Kenya, was bringing me some that had been donated for the homeless dogs. So I found a can of dog food in my pet food cabinet, and mixed it with some people food for his dinner. I don't suppose he has had anything but table scraps, if that, for quite a while. He was very good about waiting to pee until I took him outside, so I gave him a treat and told him "Good Boy" when he did, just like I do all the dogs. I always go out with them.

Kenya arrived with a bunch of food for him. It is really good food, too, Nutro Choice Adult, Lamb and Rice. Looking at the ingredients, there is NO corn meal in it, so I know it is good. She wouldn't have brought me anything like that grocery-store-corn-meal stuff anyway, she believes in feeding the SPCA animals the best of food. She also brought some boxes of those foil pouches of cat food, also donated by Nutro. Normally, the foster moms supply the food, but she had so much that she brought some to me. She usually feed all hers Science Diet.

Kenya named folders, and wrote descriptions, ages, weights on medical record papers for each animal, and noted what they were being given. Pepper was "helping", of course, and kept looking and walking all over her paperwork, then getting things out of her medical bag, so I had to lock him up. First up was Debo, the dog. He got vaccinated, and Revolution put on him for preventing heartworms and fleas. As he had been outside, and probably last summer too, she gave me two pills for him to kill any heartworm microfilariae that might be in his system. http://www.marvistavet.com/html/body_heartworm_-_the_parasite.html He has to be kept very quiet for 24 hours after taking these pills, no running, jumping, etc. So on that day I will be keeping him crated and taking him out on a leash, so he can't scamper around in the back yard.

I have been putting Revolution on the cats, so Pepper, Misty, and Snack were just vaccinated. Kenya commented on how thin-skinned Snack, the gray cat, is. As Snack also drinks a lot of water, Kenya said that she will be tested for diabetes when she goes in for her check-up, as these are both symptoms. Also that her teeth might have to be cleaned. As you can see our county's SPCA is very thorough.

So that was the highlight of my day.
Posted by LakeConroePenny,TX at 5:12 PM

Really have missed you on Chat. I have been having problems with my connection. I hope to see you tonight. I will have to see if I can get connected and not jam up.