Lovely Weather. Did My Good Deed for the Day. 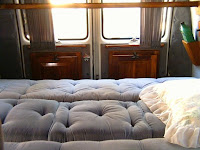 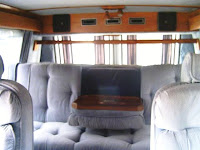 It has been a T-shirt and open windows day in the mid 70's. I like these days, not cold and not too hot.

Now, about the Chevy camping van that had been customised by Explorer that I used to own. We called it 'Little Van". I had taken it in trade on that Coachmen Class C with the truck front. I had 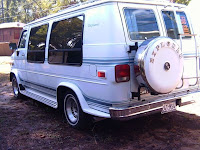 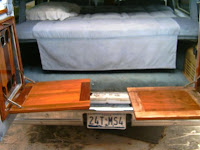 am down the street, and then he found out that he couldn't renew his driver's license, because of his stroke. So I re-advertised it on Craigslist, Kingwood Yard Sales, Cleveland Rummage Sales and Conroe Yard Sales for him, I felt that was the least I could do.
I had some van lookers coming, so I helped Sam hook it to a battery charger, but they came a couple of hours early, so I had to drive back up the street to my shed to get jumper cables. The prospective owner's son and his wife came to look and drive it first, then he called his mother, and asked her to drive up here. They went to eat while she was on her way. When the mother arrived she drove it, and liked it. I went with them, and she scared me! She is 77 years old, and is going to drive it to see her kith and kin in other states. Plucky old lady.
They tried to dicker, but Sam and I wouldn't let them, as we had already reduced the price just this week to the bare bones. Sam didn't really want to sell it, he loved that van, and he liked to look at it, even though it just sat in his driveway. But all went well, and they met the price.
Then Linda, Shay's sister, called wanting me to cut her dog's nails, so I did that. Tomorrow she wants me to bathe a declawed cat. This is one that was an indoor cat, but was deserted by it's people when they moved. It has been living outside since they left, poor thing. Linda is going to keep it in her house now, but she wants it to be bathed first. I guess she doesn't know that you rarely have to bathe a cat. I give Bobcat a bath maybe once a year when my son in law is coming, as he is allergic. It is the cat's 'lick' that most people are allergic to, not their dander, and cats wash themselves all the time.
Another first for me today. I chucked, shelled, peeled or whatever you do to a pomegranate, now I will have to find a good way to use the arils.
Another busy day.
Posted by LakeConroePenny,TX at 5:17 PM