Yes, another night in the high 20's, but the sun warmed it up to the 60's eventually. When I went to pick up Jay there was frost on the roofs of the houses and cars.

Jay needed to go into our town this morning, so we went to his bank and to Krogers. I picked up a few bargains there. His mother is home now, and not feeling at all well with the two holes in her back from where they did something to her lung, so we couldn't be long.

When I got home I waited to find out when to meet Kenya, my SPCA boss, for Snack's vet appointment. This is a picture of Snack. We got that co-ordinated, and just as I was leaving Mikey, the white miniature poodle that belongs to Sam who had the stroke, was jumping up and down at my gate wanting to come in. I didn't have time to take him back down to Sam's as that would have made me late, so I put him in the big German Shepherd cage in the dog room.
Jay wanted to go to Conroe with me to drop off Snack, and we got a quick couple of things done there. When I took Jay home, I stopped at Sam's place, but there was no answer from knocking on the door. His SUV is parked in such a way that the gate wouldn't close all the way, so that is how Mikey got out and came up here. I left a note on Sam's door that I had Mikey. He can't see very well, so I wrote it big with a black marker. If he can't read it, Sam will take it to a neighbor. This is Mikey.

Later, I met Kenya in my town to pick up Snack, and get the vet's report. They think that Snack is starting that urinary tract thing that a lot of cat's get from eating cheap grocery store corn meal food. That is 5 cats that I know of, that have come down with that, and they were all on that sa 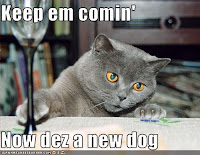 me brand of food most of their lives, until they got sick and the vet told them what caused it. I have to give Snack some pills and 1/4 teaspoon of pumpkin, yes canned pumpkin, and keep on trying to get food down her with the feeder syringe, until she will eat on her own. She is so sweet and doesn't fight or complain about anything that is done to her. She never was crazy about canned food, but she did always eat her dry food well.
I went back down to Sam's, but still no sign of him. His SUV and golf cart were still there, so I am worried about him. I fed Mikey some dinner, and he is comfy and content.
Three trips, so I put a few miles on the truck today!
Posted by LakeConroePenny,TX at 9:37 PM