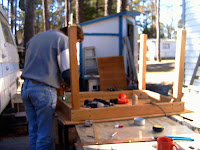 It started out cold, but it turned into a great day, in the 60's with the sun shining. This more like the winters that we are used to.

Jay came up here, as the order for today was to make a new bigger table for my porch, and get the double-decker cat house out of there. We were making it into a night house for Orange Glow on Ray and Shay's back porch/utility room. He will have to be locked up at night now. That is Blackie, the black cat's, night porch, and 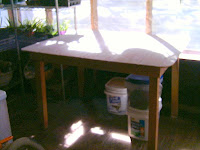 she will slap the dickens out of him if he is loose in there.
Several years ago, I had bought a wooden, Formica top table at a yard sale for a $1. The top was butcher block Formica, which matched an RV we were working on, that needed a table, so we used the top for that. The legs and table base had been saved up over the storeroom. Jay and I got them down, and a piece of his
house siding, and made it into a new table for potting plants on the porch. The old table was getting wonky and had slats on the top 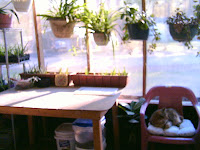 where dirt would fall through, so it was about time.
While we were at it we vacuumed and mopped the floor with bleach water.
We put a Plexiglas skylight in the top of the cat house, so that it wouldn't feel so dark in there, and hinged the top, and put a clasp on it. We are looking for an RV oven shelf or similar to make a door. Ray can paint it tomorrow 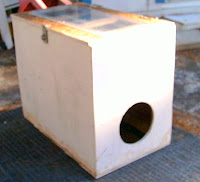 When I picked up Jay, I stopped at
Sam's, and he was there. He had been taken to Houston yesterday, and didn't think that Mikey would go out of the open gate !! He moved his SUV and closed the gate, so I took Mikey to him.

A good working day.
Posted by LakeConroePenny,TX at 5:56 PM