Well, it was quite warm when I got up, so I dressed in a tank top and opened all the windows again. But the forecast was that it would get colder during the day, so I changed into a T-shirt to go into the next town, and took a jacket.
Jay wanted to go with me. We took some food down to the lake for the ducks and fish, but a great big flock of about 50 seagulls arrived from nowhere, and grabbed it all. I would liked to have snapped a picture of them. I have got to get my iddy-biddy Aiptek digital camera working again. It is the size of two pens. I can't get used to the camera on my cell phone, and the Aiptek won't cost me 15c. per picture. I hope all it needs is batteries. In fact if it does still work, I might go back to my old non-camera phone, so much easier to use.
Jay had to get a new faucet for his mother's kitchen sink, and I had some parts to return and buy at Lowes. The return items were so long (6'8") that we had to open the back window of the truck to carry them, as we had also loaded up the great big dog carrier that I had bought last week. As none of the foster moms needed it, I had put it on a local online yard sale site. A lady with a Mastiff was coming 25 miles to buy it, and I was saving her some miles by meeting her in town. 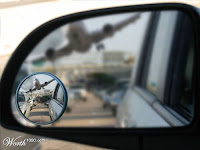 Also, we were picking up a hopefully not defective vacuum cleaner to replace the one that is, at Walmart.
At one time we were running the AC, but by the time we had done everything, the temperature had tumbled so we were wearing jackets.
Be careful out on the roads, you never know what's coming at ya.
A changeable day.
Posted by LakeConroePenny,TX at 7:18 PM

It was good seeing you on chat last night. I have been away for some time and I miss all the chatting. I hope to get back to be regular on there.