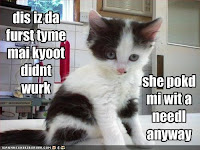 It was chilly this morning, so I wrapped up, and put a little doggie sweater on MaeMae when I took her out for her "first call". Bobcat reluctantly watched the world out of my bathroom window, instead of the porch.

I gave Orange Glow his medicine at 6.30 am, so when Ray came over to tend to him at 8.15, he had time to hold him for a while before Orange Glow could eat. He loves to be held and petted. He is such a loving, quiet, well mannered cat. He doesn't mind being locked up at all, but as soon as he can, he will be loose in the dog room. He can't right now, as he mustn't jump up or down off anything.
Ray then came to work. We were out there in coats, hats and gloves, but we checked the air in the truck tires, the water in the motor home batteries, and the water in the truck battery. It is a good thing we looked at the truck battery. Someone had messed with the tie down bracket, and tightened it down so tight that it made a depression in the battery. This had caused battery acid to splash out of the cell near the bracket, as the lid didn't fit tight anymore, and it was covered in corrosion. We took the bracket off, scraped it, wire brushed it, re-painted it, then sprayed some battery terminal spray on it. That should hold it until I can get this new battery replaced.
While we were doing all this, we had the burn pile going, as it had drizzled last night. The forecast was for 6 mph winds, which wasn't right! We had to watch it very closely, as it gusted a lot more than that, so we had to keep on wetting it down. 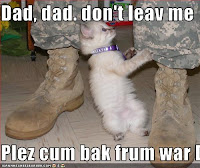 I am still having trouble getting Snack to eat. The vet checked her and couldn't find anything wrong with her. I got a big syringe, without a needle of course, and got a little pate type cat food down her, but it wasn't really the right tool. The next time I did it with a turkey baster, but that wasn't right either. Today, I also found out that before I got her, her "Dad" and "Mom" had split up and she was the Dad's cat. He couldn't take her with him, as he went to fight in the war. The Mom didn't want her, and she already had a cat and a dog. Snack always looks like she is grieving, and I don't know what to do about it, except give her all the loving I can. If I let her in the house with Bobcat and me she just hides under the bed, and doesn't eat or drink. It is so sad.
As it supposed to go down to 27 deg. tonight, I turned the water off at a cut-off in the workshop that goes to the outside faucets and the porch sink. I covered up a couple of plants out front, too. This has been such an usually long winter for this part of TX. But we are a lot better off that those who are freezing and have no power in the Mid West, I am so sorry for them. At least we were having mild weather when Ike made us lose power for a week.
Just a cold day.
Posted by LakeConroePenny,TX at 8:08 PM