Simon Cowell. How To Shop Fur-free This Holiday Season. Bob Barker. Donate Fur Back to Animals.

Oh! Here's Penny again, telling us something we don't want to think about.
But it is important to reiterate it while so many people are shopping for gifts.

"Americans don't want Lassie turned into a fur coat," Moran said. "In the U.S., we treat cats and dogs as pets, not trimmings for the latest fashion wear."

People just don't understand that caring for animals doesn't mean you think they're more important than humans, just that they are AS important.

How to shop fur-free this holiday season

Nov 29, 2010
Fur farms now produce about 85% of the world’s fur, of which China – with no legal animal welfare protection and appalling conditions for farmed animals – is now responsible for four-fifths of pelt (fur) production. After a downturn in the industry years ago, fur is now enjoying a resurgence thanks to ever-cheaper production, largely in China, a growing international consumer base, and ignorance or indifference among the public about the suffering of animals farmed for fur.

Every year, an estimated 60 million mink and 6.5 million foxes are killed on fur farms. If rabbits are included, the number of animals killed every year solely for their fur may far exceed one billion. Cats and dogs are also commonly used in Chinese fur production. Conditions at the farms and methods of killing the animals are always cruel.
Fur farm life >> (PDF)
WSPA investigation into the global fur trade >> (PDF)


"According to the Humane Society, raccoon dogs are typically skinned alive for their fur, which is often mislabeled as faux, raccoon, coyote or rabbit fur, the source says." From: http://www.stylelist.com/2009/12/03/lord-and-taylor-bans-raccoon-dog-fur/
and: http://animalblawg.wordpress.com/2009/05/13/live-skinning-raccoon-dogs-and-other-tales-from-the-fur-farm/
____________

"This is an animal that is routinely killed by stomping them, or beating them, or skinning them alive," Markarian said. Video produced by Swiss Animal Protection and posted on the Internet shows raccoon dogs clubbed or slammed on the ground and some writhing, gasping and blinking as they are skinned alive." From: http://www.foxnews.com/story/0,2933,253999,00.html
_____________

"Raccoon dogs are members of the dog family who bear a striking resemblance to raccoons. Social animals like many canids, these terrier-sized animals seem to enjoy having a mate or friend close by. In Asia, where they are native wildlife and where they are used in the fur trade, many people think they bring good luck. Join the Fur-Free campaign to help raccoon dogs.


The Most Misrepresented Fur in America

A majority of the falsely advertised or mislabeled fur-trimmed jackets we tested contained fur from raccoon dogs."
More at:  http://www.humanesociety.org/animals/raccoon_dogs/
_________________ 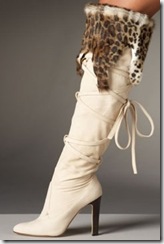 "It specifically points out a pair of Manolo Blahnik boots (shown right) trimmed with what both Neiman Marcus and Bergdorf Goodman call "cava fur."

But after some research, the Humane Society claims that there is no such thing as "cava fur" and that the boot -- currently for sale on both store's Websites -- is actually trimmed with ocelot fur, a species protected by the Endangered Species Act, and thereby illegal."  From: http://www.stylelist.com/2009/08/20/humane-society-files-ftc-petition-against-neiman-marcus-and-berg/
_______________

Bob Barker stepped down over fur:
"The former game show host is a long-time animal protection supporter. Bob Barker first became interested in animal issues when his wife, Dorothy Jo, stopped wearing the fur coats he had bought her.  After being the MC for the Miss America pageant for over 20 years, Barker stepped down when he asked the pageant producers to stop offering fur coats as prizes and they refused." From: http://animalrights.about.com/od/organizationsandactivists/p/BobBarker.htm

Bob Barker also contributed many millions to try to stop the Japenese from whaling in the Antarctic.  If you have seen "Whale Wars", you already know this.

"The Miss Florida USA program held a preliminary event in Hollywood over the weekend.
Some of the contestants (the three categories women compete in, by the way, are: "personality, swimsuit, and evening gown," according to the program's website, which makes a point of stressing "NO PERFORMING TALENT IS REQUIRED") said as they rushed by, that they didn't know the Fur Information Council of America (FICA) was a sponsor of the event or gave out fur coats to pageant winners."
From: http://blogs.browardpalmbeach.com/juice/2010/06/miss_florida_usa_event_gets_pr.php
______________

"A good seller will always tell you what you want to hear, but a good buyer will always think twice before falling into the seller's marketing pitch.
And to perpetuate the notion that fur can be versatile, in the last few years the fur industry introduced a new trend: making real fur to look like fake and dying it with different colors.
Consumers should also be aware - that the fur that you bought or will buy - used to belong to someone's else's companion animal (dog or cat) from Asia. Because of the slump in sales in recent years, the fur industry has been using every Machivallian trick (and will continue to do so) to fool naive consumers at the expense of millions of defenseless and voiceless animals. All in the name of style.
People wear fur because it is environmentally friendly
The fur industry will tell you that fur is bio-degradable and a renewable resource. However, opponents such as PETA will tell you the opposite:


Contrary to fur-industry propaganda, fur production destroys the environment. The energy needed to produce a real fur coat from ranch-raised animal skins is approximately 20 times that needed for a fake fur. Nor does fur biodegrade, thanks to the chemical treatment applied to stop the fur from rotting. The process of using these chemicals is also dangerous as it can cause water contamination.

About 44 pounds of feces are excreted per mink skinned by fur farmers. Based on the total number of minks skinned in the U.S. in 1999, which was 2.81 million, mink factory farms generate approximately 62,000 tons of manure per year. One result is nearly 1,000 tons of phosphorus, which wreaks havoc in water ecosystems.

You also have to ask this most important question: How is the fur industry friendly to the millions of animals living in crowded and disease-ridden cages and then suffer a cruel death?
How does a furrier kill a fox or a chinchilla in a "friendly" way? "  From: http://www.criticalbeauty.com/Pageants_Fur_Coats_1.html
_______________

DONATE YOUR FURS TO THE ANIMALS:
Donate your old furs to wildlife.    If you don't feel comfortable donating used or old furs to people, give them back to the animals. The furs are used to provide warmth and comfort to injured wild animals.
For more information: http://www.humanesociety.org/issues/fur_fashion/donate_old_fur.html

I found another chiropractor in our little town, and this one even takes my insurance.  The one I had been going to, had closed down and moved out of state. 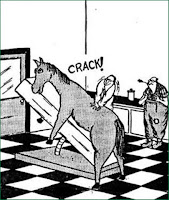 I had to wait a long time, and I had planned on going into the next town to pick up the Garmin 255W, but Target gave me such a run around, and kept me on hold so long that I decided to forget it.  It would have been dark before I could get home.   From what I understand, I am better off with a hand held for Geocaching, anyway.
___________________

Because of the superb weather, this was the day  to put the Dicor Primer, Activator, Cleaner, and the rubber roof sealer on the roof of the cargo trailer.   Ray did that, while Jay cut and installed one more sheet of paneling inside it.  I was 'gofering' between the two of then.

Another cold spell will be upon us again soon, but the weather is beautiful sunny 80 deg., today.
Posted by LakeConroePenny,TX at 1:53 PM