Magazines, TV and the Internet are obsessed with celebrities and celebrity culture.

How does society's fascination with celebrity culture affect you and your children?

How can you counter its negative influence?

"I remember, as a child, watching the Jackson Five perform on television. Young Michael Jackson's stage presence, voice and talent were mesmerizing. Years later, as I watched his "Thriller" music video, a full-blown movie production with Hollywood special effects turning Michael into a monster, it was clear to me that his persona was very different from the earlier child sensation belting out puppy love lyrics to bubblegum rock.

He seemed to have it all—fame, money, adoring fans. We also know a little of the other Michael Jackson—strange disfigurement, broken marriages and self-destructive behavior. Whether it was his performing genius or bizarre lifestyle, love him or hate him, the public could not get enough. He remains very popular well after his untimely death in June 2009.

Michael Jackson was both messenger and victim of a celebrity culture defining the spirit of an age. People envy the fame and money of celebrities and imitate them as role models. At the grocery store checkout, people grab the latest celeb magazine to revel in their sexual exploits and bad-boy or bad-girl experimentation with drugs and alcohol.

Many hold them up as glimmering stars until they come crashing down in the latest Internet sex video scandal or announcement that they have just entered a rehab center. Fans worship celebrities until they become parodies of themselves, and then the media turns them into cartoon characters.

In reality, many celebrities live emotionally and spiritually destructive lives. With 24/7 media coverage and the need for young people to have role models, the celebrity lifestyle of glamour and thrills seems attractive to many children, teens and young adults.

We excuse professional athletes who use illegal steroids as long as they perform. When they can no longer thrill us with hitting the baseball out of the park, we turn on them in hypocritical condemnation. People like to hitch their wagons to the latest rising teenage singing star. When he or she predictably has a breakdown, they shake their heads in disgust.

At the same time, all too many young people see the celebrity lifestyle of fast money, easy sex and fame as the ultimate measure of success and happiness. The results are empty and many times tragic."

We have been working on the cargo trailer, even though it was cold this morning.   The sun was shining, so it was nice to work outside as long as we were wearing our sweaters.
It took a while for Jay to get the insulation up on the ceiling, as we had to cover all the places where there are wires, with metal plates. 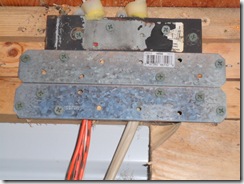 One really bad place they had made big grooves to run wires, which really diminished the structural integrity.  It needed more than the two mending plates we had bought, so we had to improvise.
I like being out in the country, but sometimes it is a pain when the big stores are a 25 mile round trip! 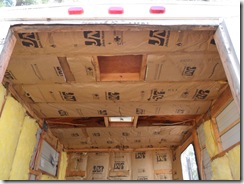 Finally, we had insulated all that needed to be done, right now.  We left one place bare, as we want to make sure it doesn't leak anymore.
I was doing the cutting, and Jay was doing the stapling, as I can't reach up that high.

The walls are next, but I am waiting for the windows to arrive first.

Ray was inside cleaning the ceiling fans, and air cleaners, but I was running backwards and forwards being 'gofer' for both of them.

I'm with you, being in the country is nice until you're working on a project and need to keep running to pick up supplies!

When you folks get done, will someone be able to actually live in this trailer like a travel trailer, or will it be kind of an office trailer for day use? I am trying to understand what you are building.

Hi Karen and Al,
I keep just about everything you can think of here, and replenish parts all the time, but some jobs just take more than what you have on hand.

It is going to be a 'stealth' travel trailer. It will be one that can be lived in, but you can park overnite just about anywhere because it will still look like a cargo trailer.

It had been partly equipped by an RV company before I got it with AC, 12v. inside lights, converter, 30 amp cord, and awning. But all the inside had to be redone, as the previous owner hadn't finished it, and had done sloppy work anyway.

Thank y'all for your comments.
Happy Trails, Penny, TX