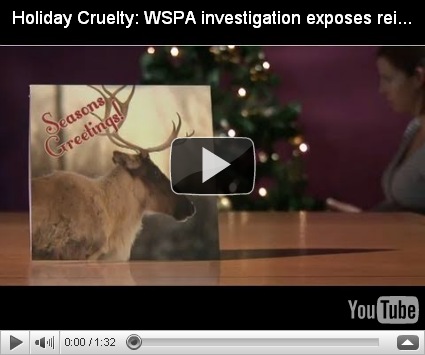 The reindeer are food in many lands, and they are being just as cruel to them, as factory farm beef and pork is here.

Prelude to a Common Claus:

It is believed the legend of Santa was brought to the New World by Christopher Columbus, who, upon arriving in Haiti, named a port after the patron saint. In 1621, when the Dutch landed on the New York island of Manhattan, they erected a statue of Saint Nicholas as a tribute to him for their successful journey.
American writer Washington Irving made an effort to describe Saint Nicholas in his 1809 book, “Knickerbocker’s History of New York,” which focused on Dutch folklore. Irving framed the character with “a low, broad-rimmed hat, a huge pair of Flemish trunk-hose and a [long] pipe.”


The first was New York author Clement Clarke Moore, whose epic 1822 poem, “A Visit from St. Nicholas” (better known as “’Twas the Night Before Christmas”) began approaching the singular vision of Santa today. The poet described Santa as "a right jolly old elf," when legend held that the bishop Saint Nicholas from ancient Turkey was actually a human. And since nobody claimed to really have seen an elf, the popular interpretations of Father Christmas remained quite diverse and confusing.

Then, in 1862, political cartoonist Thomas Nast gave Moore’s Santa Claus a widely circulated, physical presence on the cover of Harper's Weekly magazine. Still picturing Santa as an elf-like figure, Nast nevertheless made the character more realistically round and also was the first to give Santa the white beard and matching hair.

Nast continued to create Santa illustrations for 30 years and along the way changed the color of Saint Nick’s coat from tan to the now-traditional red. But the cartoonist neither established a lasting archetype for Santa nor settled on one firm height.

In the 1920s, The Coca-Cola Company began to promote soft drink consumption for the winter holidays in U.S. magazines. The first Santa ads for Coke used a strict-looking Claus.

Santa Claus made another appearance in Coca-Cola advertising in 1930. Artist Fred Mizen painted a department store Santa impersonator drinking a bottle of Coke amid a crowd of shoppers and their children. The illustration was used that Christmas season for Coca-Cola ads in The Saturday Evening Post and other publications.

Not long after, a magical transformation took place.

Archie Lee, then the agency advertising executive for The Coca-Cola Company, wanted the next campaign to show a wholesome Santa as both realistic and symbolic. In 1931, the Company commissioned Sundblom, a Michigan-born illustrator and already a creative giant in the industry, to develop advertising images using Santa Claus. Sundblom previously produced other illustrations for Coca-Cola, but nothing would compare with what was about to transpire.

Sundblom turned to Clement Moore’s classic poem for inspiration. The ode’s description of the jolly old elf led Sundblom to fashion an image of Santa that was warm, friendly and human – quite a change from the sometimes-harsh portrayals of Santa up to that time. "

From:   EARLY SANTA CLAUS WAS MAN OF MANY DISGUISES
History of a Holiday Icon, and Why He Looks the Way He Does.

A lot more at: http://www.thecoca-colacompany.com/presscenter/pdfs/santa1.pdf

Imagine for a moment you're far away from your loved ones at this special time of year. You might know when you will be home again, but that date is so distant it's hard to picture. You're cold, tired and really miss the simple things -- like talking to your kids on the phone.

That's what it is like for our troops spending this holiday season in Afghanistan, Iraq and at outposts around the world.

But through the USO's At Home In Our Hearts holiday campaign, supporters like you have the chance to give our troops something really special: the opportunity to make a phone call home.

Whether it's the sound of your daughter's voice, hearing your son talk about his football game, or the opportunity to tell your parents you're alright -- when you're deployed during the holidays, it's a phone call you'll treasure.

Will you join me in giving our troops the chance to phone home for the holidays?

There's nothing we can ever really do to thank our troops enough for the sacrifices they make. But we owe it to them to try and right now that means helping them make personal connections with loved ones to brighten their holiday.

Every dollar you give to "Operation Phone Home" can provide twenty minutes of talk time for our troops. With your help, we can bring them all a few minutes of holiday warmth with family.

You can make sure that this holiday, home is just a phone call away for our troops.

No matter where they're stationed or deployed, our troops are spending this time of year At Home In Our Hearts. Please help them bridge the distance by making a special gift today.

Thanks for all you do,

"“When I get asked why I don't celebrate Christmas, I ask the person, "Why do you?"

After hearing their response, I explain that all we generally know is what we have been told by our parents and ministers, but that I have personally researched this and proven to myself that I shouldn't celebrate Christmas.

I then ask them if they have really studied the subject. The usual responses are "No" or they don't say anything.”"

"The article below was originally printed in the Gazette in 1990. My friend Shirley Wilkes Johnson lives in West Columbia, TX, near Houston. She is a renowned vegetarian cook with a special passion for vegetarian chili. She is also a sincere and sensitive human being who has been a long-time friend to non-human animals. It is with pride that we reprint her article about Christmas. "         http://www.purewatergazette.net/swjohnso.htm

Ray and I didn't have much time to work, so we replaced the Stanley strip insulation on my back door,  and he washed my van today.

Posted by LakeConroePenny,TX at 12:27 PM