Has America Lost Its Way?

"Increasingly it seems that the United States cannot solve its problems—whether it be the economy, the wars in Iraq and Afghanistan, illegal immigration or the Gulf oil spill.

Previous generations seemed to know what to do.

Has America lost its way?"

"When I'm home on Sundays I try to watch The McLaughlin Group on PBS, which I find to be the most enlightening discussion on television. My daughter refers to it as my "shouting program" and invariably leaves the room. It's a 25-minute discussion on current events sponsored by The Financial Times, one of the world's most prestigious newspapers.

One of the regular contributors is conservative columnist and former presidential candidate Pat Buchanan. On a recent program when the Gulf oil spill was being discussed, he made a profound and insightful comment. Paraphrasing his words, he observed:

"Just look at us. We can't cap an oil spill in the Gulf, we can't balance our budget, we can't police our borders and we can't win our wars! How can the world take us seriously?"
Clearly something has gone seriously wrong in the United States, and Americans are increasingly aware of it.

The big issue—the economy:
The economy remains the number one issue. As I write this, TV news programs are highlighting the fact that consumer spending is going down, meaning that people are worried about the immediate future. Also, GDP growth slowed in the second quarter of the year to 2.4 percent. This rate of growth is not enough to put a dent in the increasingly worrisome unemployment figures.

Whereas the official unemployment rate is under 10 percent, the real figure is closer to 16.5 percent, according to various financial and economic sources. The reason for the discrepancy is the way the unemployment figures are calculated.
The long-term unemployed are dropped from the figures after they stop reporting that they are looking for work. These so-called "discouraged workers" may still be looking but have no reason to report it after their benefits run out, or they may have taken part-time work to try to get by, and so could be called underemployed.

The most widely reported figure from the Bureau of Labor Statistics counts as unemployed only those who have reported actively looking for work in the previous four weeks, leading to systematic undercounting.
Making things worse is that many of those who are employed are working shorter hours, suffering through a prolonged period of reduced pay. There's little wonder consumers are not spending as before.

What's wrong with the economy?

In the same year that the United States declared itself independent from Great Britain, the Scottish economist Adam Smith wrote his book The Wealth of Nations. Smith was an advocate of free enterprise. He believed that when individuals pursued their own personal interest, society as a whole benefited. He strongly supported free-market competition, which helped everyone by keeping prices low while at the same time providing incentive to produce a broad range of products and services.

The wealth of both the United States and Great Britain was built on the free enterprise system promulgated by Smith and his followers. After World War II, Britain turned increasingly away from those principles, advancing the power of the state at the expense of the individual. Consequently, Britain lost its preeminent position and its empire, succumbing increasingly to foreign competition where Smith's principles are increasingly making inroads. India and China are two notable examples.

The United States, regrettably, seems to be following in England's footsteps. The government sector is growing by sucking wealth and resources from the private sector.

Federal government jobs, according to several recent reports, now pay on average double what the private sector pays. Almost 50 percent of Americans depend on government for their livelihood in one way or another. The present administration seems set to increase the role of the state sector further.

Ironically, at the same time a communist country on the other side of the Pacific—China—moves closer to free enterprise principles to promote economic growth.
It's not too difficult to see why the United States is in serious trouble. Nor is it hard to see the solution.
Quite simply, the government sector (both federal and state) needs to be downsized, thereby enabling taxes to come down and giving a boost to private enterprise.

Today it seems that America's leaders make few, if any, sensible decisions—that when the United States is confronted with a challenge, any challenge, the wrong decision is made.

Moreover, it seems increasingly clear that the decisions these leaders make are the exact opposite of what earlier generations of U.S. leaders would have said or done. Thus it seems as if the country really has reversed course.

America has truly lost its way as it enters dangerous and uncharted waters!"  GN
To read the whole article: http://www.gnmagazine.org/issues/gn90/has-america-lost-its-way.htm
___________________ 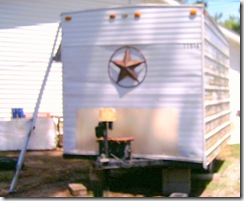 Jay and I repaired a bad place on the front of the cargo trailer.  It had been covered by a sheet of rigid yellowy plastic, and we wanted to see why it had been put there.  There was a big raggedy gash in the metal, so we riveted some metal over it.
We had already spotted some diamond plate looking stuff to hide and cover it across the bottom.

We found out that the front studs are not attached to the outside metal, so after Ray took off the house numbers that were on the right, and the big Texas star, we marked where the studs are on the outside of the trailer.  No wonder it looks all bulgy!  Now we can remedy that.

Ray  was able to finish painting the big back door, finally, as the weather was lovely.  Then he went up on Pugsy's roof (the vintage motor home), and made some more preparations for us to be able to put the right side luggage rack back on it.   The rubber gasket that goes under this 7-1/2 foot rack, had got old and shrunk, so I bought a rubber garage door bottom gasket yesterday.  It will work just fine.

We did some more to the trailer wiring.    We added an inside switch for the porch light on the back, as it had never had one, or even been hooked up.  Really strange, the light was there, but the wires had never been connected.  Now it works on a switch. I was running back and forth hooking up, and unhooking, the trailer's battery for each test.   All these little things have to be gone before we can start on the paneling.

Tomorrow our local stores will be closed, but we still needed some parts for the breaker box, so it was a nice drive to the local hardware store today.
Posted by LakeConroePenny,TX at 6:22 PM

Does the Texas Star limit potential buyers to Texans only? Perhaps you din't put it back on, you didn't say.

Hi Rod and Loyce, thank you for your comment.

No, I don't plan to put the TX star back on it.
The kitchen is going to be at the front, so I would like to put a window there.

Who does Melvin Rhodes write for? I am with him on this. What a mess our beautiful Country has become.

Hi Pidge,
I see you found the link.
Yes, it is a shame how things have changed in the USA and Britain.
Happy Trails, Penny, TX