"Often in puppy training classes, instructors will recommend you jerk at the neck to correct puppies from pulling on their leash.

I NEVER recommend this because it so often results in cervical trauma, which leads to DJD later. These early dog and cat head traumas are one of the main reasons we see premature joint degeneration.

These seemingly minor traumas add up over time.
What is important to remember is that normal wear and tear can result in joint degeneration, if it’s not addressed. Minor traumas treated early can result in your pet’s leading a very normal life.

For example, you take your dog for a walk on a leash. He spies a rabbit and instinctively tries to bolt, forgetting he’s tethered to the leash, which causes his head to jerk backward. This creates a common cervical injury that I often see evidence of later.

When a puppy gains size and weight too quickly, the cartilage in his body often can’t keep up with the growth of his frame, and cartilage deficits result. When imbalances of this type develop in a growing dog, they can contribute to hip dysplasia and other structural weaknesses that ultimately lead to arthritis.

High calorie diets, which are typically also high in carbohydrates, can cause too-rapid growth, especially in larger breed dogs.
In fact, research indicates the amount of calories a dog consumes, especially from the age of three to ten months, can have a significant impact on whether a pup genetically prone to hip dysplasia will develop the condition.

In a 1997 study of Labrador Retriever puppies, the dogs fed ‘free choice’ (from an all day, all-you-can-eat-buffet) had a much higher rate of hip dysplasia than their littermates who were fed the same food, but in controlled portions that amounted to 25 percent less than the free fed pups.


Early Trauma or Injury Can Lead to Joint Disease Later


Early pethood trauma is probably the most overlooked source of joint disease in dogs and cats.
It doesn’t have to be a major trauma like being hit by a car. It can even seem insignificant at the time.

Young dogs are prone to flopping off sofas, falling down steps or out of the back of pickup trucks. They get up and trot away, leaving you with the impression that all is well. But the condition is a setup for later troubles.

Another example is when a newborn kitten gets her head stuck in the birth canal. Owners sometimes assist by manipulating the head during the birth process. However, kittens can suffer cervical injury from this and, if not addressed, can go through their lives with their heads not resting on their spines squarely, like with their head cocked, leading to spinal arthritis.


In humans, arthritis is most often an age-related and bad nutrition condition. This is can be the case with companion animals.
There are several causes of arthritis in pets, but two of the most common are developmental disorders and high calorie, carb-based diets."

Developmental Disorders like Hip Dysplasia Set the Stage for Arthritis

Genetics plays a significant role in the condition. If one or both of your dog’s parents have the disease, your pet is more likely to develop it as well. If no sires or dams in your dog’s lineage are carriers, it is less likely your dog will wind up with the condition.
Obviously, careful breeding can reduce the incidence of dysplasia. If you plan to acquire a pup of a breed prone to the disorder, you should gather as much information as you can about the health of your prospective puppy’s parents and their parents, at a minimum. Dysplasia can skip generations, so try to research as far back in the puppy’s lineage as you can.
And if your dog has hip dysplasia, or the disease is in the lineage of your pet, he or she should not be bred."

My thoughts:
Reputable breeders of large breed dogs will have OFA certification stating that the sire and dam are not dysplastic.  I raised and showed Standard Poodles, and mine were all OFA certified, and so were their ancestors.   http://www.offa.org/hd_info.html and: http://www.experts123.com/q/what-is-ofa.html

Bad patellar, (back knee joints), also called 'slipped stifles', http://ezinearticles.com/?Patellar-Luxation,-Aka-Slipped-Stifle---Is-Your-Dog-Predisposed?&id=3030890  is another hereditary condition, and those dogs should not be used for breeding.  You can hear the joint clicking when you move the leg when bathing or brushing, etc.  Sometimes it is necessary to have surgery done on the leg.

When I found out how some people treat their animals, and how many are homeless, I quit breeding, had them all fixed, and turned my attention to the ones already born, abused or homeless.
I had quit showing my dogs, as I found out that the showing circles are as riddled with graft as other places, including the government!

Yesterday:
Paco, the Chihuahua, and I, finally arrived at the grooming shop in Spring to help with the SPCA pet pictures project.
MapQuest and Google Maps had me going all around Kelly's barn, but it was right off the freeway in Old Town Spring.  I had never been there, and got lost.  When I found Old Town Spring, it was quaint antique shops, boutiques, narrow streets, packed with cars, no parking spaces, and really a touristy place.  Then I had trouble finding the shop, I circled around several times, slowly in all the traffic, and I would never have found it, if I hadn't called them.

No one had warned me that this event was being held outside.  Last year we had the use of a big room in Petco.   It was cold, and the wind was piercing under the Easy-Up canopy where we were set up. 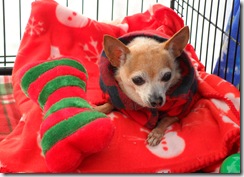 The photographer and Santa were set up on a covered porch, and even though the sun was shining, we had to wrap the porch in tarps.  I was so glad that I hadn't brought the cats. They would have been miserable.

Paco doesn't like the cold, and so Kenya, my SPCA boss, found him a long plaid woolly coat to wear.  Here he is on a big comfy red blanket, still shivering.

But he loves to sit in the sun, so I moved a chair into the sunshine, and held him, but I wasn't dressed for being outside, either. 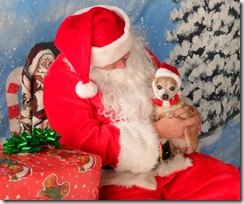 They had been very busy with the pictures on Saturday, but today, hardly anyone came, so Paco had his picture taken with Santa.

What Santa has to do with Jesus, I don't understand, but it wasn't my call. This event was for the public to have their dog's picture taken with Santa,  and the proceeds were for our SPCA.

As we weren't busy, I had a chance to talk to Kenya about my 15 year old Bobbiecat.   Different things made me suspect that Bobcat might be in the early stages of diabetes, and Kenya confirmed that, as much as one can without a test.
She had a cat go into full-blown diabetes, (2 shots a day) and healed it in six months by careful diet.  She said that grains and salt in most pet foods, are very bad for diabetic pets.

She recommended putting Bobcat back on Wellness as it has NO grains, and is human grade pet food.  Bobcat has been on a special Royal Canin which has glucosamine and chondroitin in it, for her severe elbow arthritis, but Kenya said she would be better with Wellness and add some G & C to it.  She was a vet tech for many years, and when you have nursed as many abused and sick animals back to health as she has, she knows what she is talking about.  She makes homemade food for her cats, but she knows which additives to include, to make it properly.  Cats have to have taurine, and the right PH in their food, or they can go blind, get sick or die.  Not something that I am ready to tackle right now, as it takes a lots of research, so I will let Wellness do it for me!

Paco and I stopped at Petsmart to get Bobcat her Wellness, on our way home.  It is expensive food, but it sure is cheaper than vet bills.  Paco thought that store was great and enjoyed walking around.   But he scampered across the parking lot as fast as his little legs, and leash, would carry him, as he was eager to get back in the warm car and his furry lined carrier.     He is going to be a great little companion for someone, as he loves to travel, and is never any trouble.

As I was chilled all through, I hurried and covered up the three bushes in the front of the house, as it was going to be about 23 deg., took some aspirin, a bunch of Vitamin C, and I hope I didn't catch a cold. 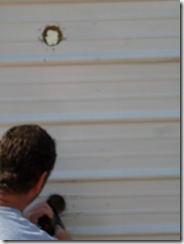 Jay, Ray and I did several odd jobs on Pugsy and the cargo trailer.  It was too cold to paint.

Here is Jay cutting the new hole through the trailer with the jigsaw.

This will simplify a lot of things, and I don't know why I didn't think of it before today.
Posted by LakeConroePenny,TX at 2:19 PM