Please watch the video and you will see why:

"For approximately one month, an HSUS undercover investigator documented the suffering endured by female breeding pigs held in severely restrictive gestation crates on a factory farm operated by a subsidiary of Smithfield Foods, in Waverly, Virginia. Many of the highly intelligent and inquisitive pigs develop sores and infections from crate-related injuries and from simply lying in the same position without relief. Out of sheer boredom, they engage in repetitive behaviors — such as bar biting and head swaying — sometimes injuring themselves in the process.
Please send Smithfield a loud and clear message that it needs to honor its self-imposed commitment to stop using inhumane gestation crates by 2017."

Other major producers of pork, Maxwell Foods and Cargill can do it, why not Smithfield?

Would you want to eat pork that has lived and died in these dreadful and stressful conditions?

"Farmers and scientists agree that one should slaughter the animal without alarming it. Stress causes the animal to release chemicals into the blood that will produce PSE (pink, soft, exudative) meat, which isn't suitable for curing. It doesn't cook well either, because it loses too much water. Sometimes the entire carcass is a loss."
________________________

"Some buyers don't really give a hoot about the mistreatment of animals," Willis points out. "They just know our product tastes better."

Willis believes the difference is dramatic. "An animal who's been raised on a concrete floor is going to be inedible compared to ours," he says. Some pigs are now marketed as lean meat, he adds, "and they do indeed raise a pig so lean that it can't live outdoors because it doesn't have enough fat to protect itself. And broiler chickens are grown at such an incredible rate that their legs won't support the weight of their bodies, and many die of heart attacks at slaughter age of six weeks. 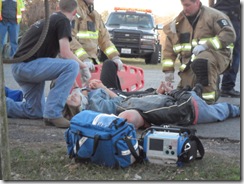 Yesterday, we had a little bit of excitement here on this corner.  From my bathroom window I could see the traffic on the busy road behind me was all backed up, and a cop car flashing, so I went to the back yard.

There was a big motorcycle laying on it's side, and two people laying face down on the road, handcuffed.  No injured cars in sight.  The cop took the guy's wallet out of his pant's back pocket to get his information.

Then another cop car and three more police vehicles arrived, then a little while later an ambulance, and then a great big fire truck.

They were going to put the woman on a back board, but just hauled her off in the ambulance.

There were lots of wreckers 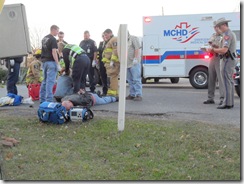 arriving to haul off one motor cycle, and the traffic was tied up for over an hour.

Then I saw another officer take a little packet out of the bald guy's inside jacket pocket, and hand it to another cop.   I wonder what that was all about!

They took the bald guy off in a police car.  I overheard an officer say that he was going 100 mph in this 45 mph zone.

Ray and I started out by going over the parts that I had bought yesterday for installing Mary's new faucet.  We didn't really want to do it, but she had no-one else, and I couldn't see the renters being without water in their bathtub.  We needed two more fittings, which fortunately I had.    We drove over there to install the new faucet, but no-one was home, so we did a little bit of painting on Pugsy and the cargo trailer, before we had to stop.

This was the day that we had planned on doing a lot of painting, as the weather forecast is for two 70 deg. days.   Mary returned my call and said someone would be at the trailer at 10.30.   So we stopped what we were doing, cleaned up the paint brushes, put away the paint cans, rolled up the tools, hung up the ladders, and drove back over there.    It took us the rest of the morning to get it done.

So, for us, it was a wasted day.
Posted by LakeConroePenny,TX at 5:29 PM