By Harry Smith on the History Channel. 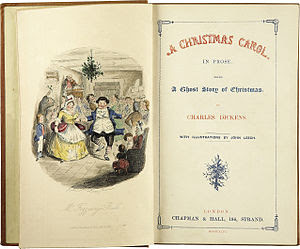 Dickens made Christmas popular with "A Christmas Carol".
First published by Chapman & Hall on 19 December 1843.

Christmas trees made popular by Queen Victoria's Prince Consort from Germany.  When he joined the British royal family, marrying Victoria in 1840, he transplanted the Germans' love for the tree to England and asked Victoria to adopt German Christmas traditions.

Santa becomes a character in US.  Images of Santa Claus were further cemented through Haddon Sundblom's depiction of him for Coca-Cola's  Christmas advertising.

"St. Nicholas had become famous as a result of Clarke Moore's poem "The Night Before Christmas," published in 1823. By the 1890s the English Father Christmas, originally a minor character in a mummer's play, had been absorbed into the personality of his American counterpart, and become the jovial figure that he is today."
Read more: http://www.bibletools.org/index.cfm/fuseaction/Topical.show/RTD/CGG/ID/41/Christmas.htm#ixzz17Hu2udiK

Nativity. Surprising Truths You May Not Know!     Nativity Scene not quite right:

"The shepherds come to see Jesus.

"Continuing the story in Luke 2:10-17: " Then the angel said to them, 'Do not be afraid, for behold, I bring you good tidings of great joy which will be to all people. For there is born to you this day
in the city of David a Savior, who is Christ the Lord. And this will be the sign to you: You will find a Babe wrapped in swaddling cloths, lying in a manger.'

". . . And they came with haste and found Mary and Joseph, and the Babe lying in a manger. Now when they had seen Him, they made widely known the saying which was told them concerning this Child."
We might notice that only the shepherds arrive in time to see Jesus in the manger. The wise men, as we will see, didn't arrive on the scene until later.

" And when eight days were completed for the circumcision of the Child, His name was called Jesus, the name given by the angel before He was conceived in the womb. Now when the days of her purification according to the law of Moses were completed, they brought Him to Jerusalem to present Him to the Lord (as it is written in the law of the Lord, 'Every male who opens the womb shall be called holy to the Lord'), and to offer a sacrifice . . . a pair of turtledoves or two young pigeons" (Luke 2:21-24; compare Exodus 13:2).
This was called "redeeming the firstborn." Leviticus 12:2-3, 6 tells us that this ceremony occurred 40 days after the birth of a son. So if Christ was born in late September, we are now into mid-November.

The wise men and Herod


We'll now continue the story flow in Matthew 2:1-3: "Now after Jesus was born in Bethlehem of Judea in the days of Herod the king, behold, wise men from the East came to Jerusalem, saying, 'Where is He who has been born King of the Jews? For we have seen His star in the East and have come to worship Him.' When Herod the king heard this, he was troubled, and all Jerusalem with him."

Why did this news disturb Herod? Other historical accounts attest to Herod's paranoia about being overthrown. The news that a new king of the Jews had been born threatened his position.

Herod obviously knew of the traditions and the prophecies relating to the Messiah. "And when he had gathered all the chief priests and scribes of the people together, he inquired of them where the Christ was to be born. So they said to him, 'In Bethlehem of Judea'" (verses 4-5).

King Herod carefully concealed his murderous intentions. "Then Herod, when he had secretly called the wise men, determined from them what time the star appeared. And he sent them to Bethlehem and said, 'Go and search carefully for the young Child, and when you have found Him, bring back word to me, that I may come and worship Him also'" (verses 7-8).

Notice that now Herod referred to Jesus not as a baby, but as "the young Child." He realized how long their travels would have taken the wise men—possibly from as far away as Parthia or the region around Babylon, where the Israelites and Jews had been exiled centuries before. Herod knew from when the star had appeared that he was not seeking a newborn baby, but a boy by now considerably older.

And to remove any threat to his position, Herod "put to death all the male children who were in Bethlehem and in all its districts, from two years old and under, according to the time which he had determined from the wise men" (verse 16). Herod, covering all of his bases in protecting his throne, ordered the murderous slaughter of those 2 years old and under.

It wasn't the common nativity scene

The wise men were miraculously guided to the Christ child (verses 9-10). "And when they had come into the house, they saw the young Child with Mary His mother" (verse 11). The typical nativity scene completely falls apart at this point. There is no mention of a manger here. Rather Jesus was, as stated, in a house. And Jesus was no longer an infant, He was a young child. The wise men obviously visited Jesus long after the shepherds had come and gone—perhaps a year or more later.

The typical manger scene includes three wise men. The Bible, however, nowhere says how many wise men there were. It does note, however, that they presented three kinds of gifts to Him—gold, frankincense and myrrh."
More at:  http://www.gnmagazine.org/issues/gn79/real-nativity-story.htm
____________________

Today, I am going down to Spring, TX to help at a photo session for people to bring their pets to be photographed with Santa.   SPCA's adoptable pets that are there, will be done, too.

It will be a long drive, and a busy, but interesting, day.

P.S.  It wasn't busy or interesting,  see tomorrow's account of it.
Posted by LakeConroePenny,TX at 6:39 AM

I hope all those pets find good and loving homes. Thanks for your work on their behalf.

Thank you, Karen and Al.

A professional photographer is going to be there. Last time we did this, it was an apprentice photographer, and they didn't realize how difficult it is to take pictures of animals! They never volunteered again.

I will take my camera, too. Maybe I can get some shots of Adoption Day.

Unless they are sleeping, they will never stand still enough to get a picture that isn't blurry! LOL