Boxing Day is traditionally day for sporting events such as fox hunting with dogs (which is now outlawed). ©iStockphoto.com/RUDI TAPPER

"Boxing Day in the United Kingdom is the day after Christmas Day and falls on December 26. Traditionally, it was a day when employers distributed money, food, cloth (material) or other valuable goods to their employees. In modern times, it is an important day for sporting events and the start of the post-Christmas sales. "

"Because the staff had to work on such an important day as Christmas Day by serving the master of the house and their family, they were given the following day off. Since being kept away from their own families to work on a traditional religious holiday and not being able to celebrate Christmas Dinner, the customary benefit was to 'box' up the left over food from Christmas Day and send it away with the servants and their families. Hence the 'boxing' of food became 'boxing day' .
Boxing Day in the UK is traditionally a day for sporting activity, originally fox hunting, but in modern times football and horse racing." More at: http://www.timeanddate.com/holidays/uk/boxing-day
_______________________

This sentiment was echoed by Federal Judge Robert Sweet in a lawsuit against the restaurant chain back in 2003 when he said: 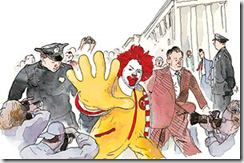 "Chicken McNuggets, rather than being merely chicken fried in a pan, are a McFrankenstein creation of various elements not utilized by the home cook."

At the time, Time Magazine reported that Judge Sweet "questioned whether customers understood the risks of eating McDonald's chicken over regular chicken."

"I recently commented on the curious ability of McDonald's food to remain impervious to degradation. It's as if the food has been embalmed to stay "fresh" forever! After sitting on a shelf for 14 years, the hamburger bun has yet to develop a single trace of mold. It's barely even begun to shrivel...
Folks, these buns bear absolutely no resemblance to real bread, and when you read the list of ingredients, this mysterious mummification feature becomes less of a mystery.
Here are just a few of the ingredients in a McDonald's hamburger bun:
Always remember that wholesome, health-promoting food is "live" food, and the hallmark of live food is the fact that it will decompose.
The fact that these burgers, buns, and fries do not decompose, even after a decade or two, is a clear sign that it's just not real food, and should not be part of your diet."   More at: http://www.time.com/time/insidebiz/article/0,9171,1101030811-472858,00.html   and:  http://articles.mercola.com/sites/articles/archive/2010/11/08/do-you-have-any-idea-of-the-chemicals-used-in-fast-food-chicken.aspx

But wait! Don’t forget to add a dash of dimethylpolysiloxane, an anti-foaming agent made of silicone that is also used in Silly Putty and cosmetics.

Now add a heaping spoonful of tertiary butylhydroquinone (TBHQ), which is a chemical preservative and a form of butane (AKA lighter fluid). One gram of TBHQ can cause “nausea, vomiting, ringing in the ears, delirium, a sense of suffocation, and collapse," according to A Consumer’s Dictionary of Food Additives. Five grams of TBHQ can kill you.

Sprinkle on thirteen other corn-derived ingredients, and you're only about twenty shy as many ingredients as a single chicken nugget from McDonald’s. And you were using pulverized chicken skin and mechanically reclaimed meat for your chicken, right?

No one in his or her right mind would cook chicken like this. Yet every day, hoards of Americans consume these ingredients in Chicken McNuggets, which McDonalds claims are “made with white meat, wrapped up in a crisp tempura batter.”

However chicken only accounts for about 50% of a Chicken McNugget. The other 50% includes a large percentage of corn derivatives, sugars, leavening agents and other completely synthetic ingredients, meaning that parts of the nugget do not come from a field or farm at all. They come from a petroleum plant. Hungry?

Scariest perhaps is the fact that this recipe is a new and improved, “healthier” Chicken McNugget launched in 2003 after a federal judge called the deep-fried poultry bites “a McFrankenstein creation of various elements not utilized by the home cook.”

Also terrifying is the fact that these McFrankenuggets are overwhelmingly marketed to children who love their fun shapes and kid-friendly size.  More at :
http://www.organicauthority.com/foodie-buzz/what-is-in-fast-food-chicken-hint-its-not-chicken.html

May 23rd, 2010
At Thursday’s meeting of McDonald’s shareholders, Paul Shapiro, senior director of the Humane Society of the United States’ factory farming campaign, urged the fast food chain to decrease its use of eggs from caged hens.

Most competitors, including Burger King, Wendy’s, Carl’s Jr. and Sonic, have gone cage-free, but egg products sold by U.S. McDonald’s restaurants come from hens confined to battery cages—enclosures so small that birds cannot spread their wings or move freely.

In contrast, cage-free hens have 200% to 300% more space per bird, the Humane Society notes.
McDonald’s stores in the UK have already gone the cage-free route, and franchises throughout the European Union will follow suit this year.

To jumpstart a transition in the United States, the Humane Society specifically proposed that the chain, with 13,000+ American locations, commit to procuring 5% of its eggs from cage-free suppliers by next January.

This meant Ronald McDonald could continue to buy 95% of his eggs from regular suppliers.
But the board urged shareholders to vote against the resolution, arguing it “would not enhance our existing policies and practices regarding the welfare of egg-laying hens and is not in the best interests of shareholders.” (Translation: McD’s makes less money, as a cage-free egg cost more, according to the U.S. Department of Agriculture.)
More at:  http://www.organicauthority.com/blog/organic/organic-food/mcdonald%E2%80%99s-board-rejects-cage-free-eggs/
______________________

This is just one egg farm in California, they are all over the United States: 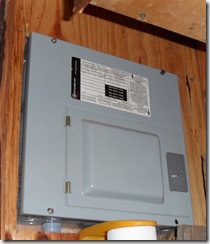 Jay and I both had thoughts about the dilemma of the breaker box overnight.  We each had solutions on how to fix it, rather than tearing out the wall to replace the box.  We used both ideas, and it was successful.  So now I have my 'kick-ass' , (as Jay calls it), 220v. heater going. 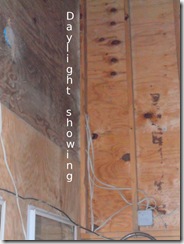 While that auxiliary breaker box was turned off, I could see in the dark garage that daylight was coming in.  Right in the corner where the contractors had added onto the house.  You couldn't see it from the outside as the vinyl siding covered it. 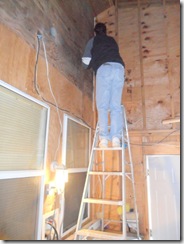 Jay and I braced a ladder on top of my washer and dryer, and he put Great Stuff all down the crack.  No wonder it was drafty in there.  He gets all the "tall jobs"!

It is very tall in the garage, as it was originally built for an RVport.  While my late DH and I had built the first part of the house, Jay and I built that front roof a bit later, to keep the sun off the front of the house.   The contractors just built underneath it, but only put a car height garage door in there.  So we had to build another RVport on the side.

We used up the rest of the Great Stuff in the cargo trailer to seal up little nooks and crannies.  Then you have to throw it out, as it doesn't keep.

Yes, there are still the front windows going from my bedroom into the garage. There a two more on the side of the bedroom.   Back then, it was just a great big carport on the front.  We kept them there in case there was a power outage, for cross ventilation.

We are in hurricane territory, and twice we have had no power for days.
Posted by LakeConroePenny,TX at 6:02 PM

I had never heard of Great Stuff before - can it be used in RV's as well?

Yes, but you have to be careful, as it expands so much that it can displace things. When it is dry, you cut the excess off with a knife. Mice won't go through it, but once it is there, it doesn't come off.

A ladder on a washer? Sounds very scary to me. The chicken thing is disgusting. We haven't eaten at Mc Donalds in years. Thanks for sharing all of these great articles.

If you click on the picture to enlarge it, you will see that the ladder is across the washer and dryer, and that there is a safety board wedged against the studs, so that the ladder cannot move. We also put little rubber pads under the ladder feet.

A lot of people don't understand where their food comes from, how the animals are treated, or how it is made. If they did, I don't think they would eat it, then they would be healthier.