A Modern Parable. Just in case you haven't already seen it:
A Japanese company (Toyota) and an American company (Ford Motors) decided to have a canoe race on the Missouri River.
Both teams practiced long and hard to reach their peak performance before the race. On the big day, the Japanese won by a mile.
The Americans, very discouraged and depressed, decided to investigate the reason for the crushing defeat.
A management team made up of senior management was formed to investigate and recommend appropriate action.
Their conclusion was the Japanese had 8 people rowing and 1 person steering, while the American team had 7 people steering and 2 people rowing.
Feeling a deeper study was in order; American management hired a consulting company and paid them a large amount of money for a second opinion.
They advised, of course, that too many people were steering the boat, while not enough people were rowing.
Not sure of how to utilize that information, but wanting to prevent another loss to the Japanese, the rowing team's management structure was totally reorganized to 4 steering supervisors, 2 area steering superintendents, and 1 assistant superintendent steering manager.
They also implemented a new performance system that would give the 2 people rowing the boat greater incentive to work harder. It was called the 'Rowing Team Quality First Program,' with meetings, dinners and free pens for the rowers.
There was discussion of getting new paddles, canoes and other equipment, extra vacation days for practices and bonuses.
The pension program was trimmed to 'equal the competition' and some of the resultant savings were channeled into morale boosting programs and teamwork posters.
The next year the Japanese won by two miles. Humiliated, the American management laid off one rower, halted development of a new canoe, sold all the paddles, and canceled all capital investments for new equipment.
The money saved was distributed to the Senior Executives as bonuses.
The next year, try as he might, the lone designated rower was unable to even finish the race (having no paddles), so he was laid off for unacceptable performance, all canoe equipment was sold and the next year's racing team was out-sourced to India.
Sadly, the End.
Here's something else to think about: FORD has spent the last thirty years moving all its factories out of the US , claiming they can't make money paying American wages.
TOYOTA has spent the last thirty years building more than a dozen plants inside the US.
The last quarter's results: TOYOTA makes 4 billion in profits while Ford racked up 9 billion in losses.
Ford folks are still scratching their heads, and collecting bonuses...
IF THIS WEREN'T SO TRUE IT MIGHT BE FUNNY. 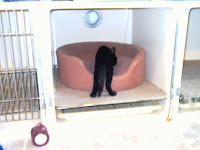 It was lovely first thing this morning, 60 deg. on the screen porch. Bobcat could go out there, I could open up the windows in the house, and wear a t-shirt again, without covering it up with a turtleneck and cardigan, and sometimes even a coat and scarf !
I was more enthusiastic about using the washer and dryer, as the workshop was warmer. Yesterday we had cleaned the little rugs that are over the open mesh floors of the dog kennel cages. They are to make it more comfy for their little feet. Today I washed all th 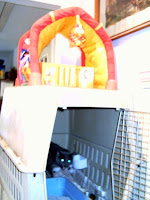 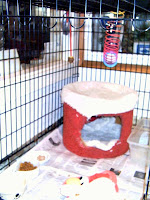 all out before I put the door back on again to keep him out of there.
He has his own beds, one inside his house on right, and one outside his house, on top of Snack's house. He loves to sit up there and watch TV, and he can see the traffic going along the road behind the house.
Snack prefers to stay in her house, as you can see. Peculiar cat. Maybe it is because she can see the TV from there ? But she does go to her other one under Pepper's cage, sometimes.
Do you think that they are spoiled ?
A quiet sunny, warm Sunday.
Posted by LakeConroePenny,TX at 11:42 AM