Getting Ready for a Freeze. URRGH

It is early for us to have to get ready for winter, I hope that this isn't an omen for a hard winter. 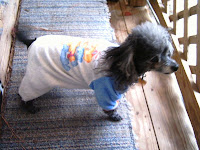 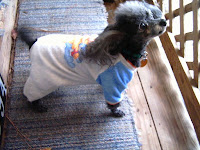 MaeMae went to play at her "Mom's" neighbor's house, and as she was going to be outside I put this little coat on her. As she is so tiny it is difficult to find a coat for her, but this one is made out of a baby's sleeper. He let her in her Mom's house, so that she could see that her Mom wasn't there, and maybe she could understand why she was having to stay with me. 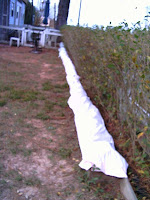 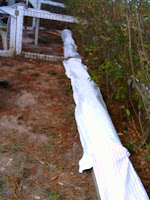 It is supposed to freeze tonight, and so Ray and I have been getting ready for it. This morning we wrapped the long trough full of Aloe Vera for winter again. It goes all along my back fence and into another part of the yard behind Ray's. (Top right, first picture.) Some were so tall that we couldn't wrap them up properly, so they were uprooted and brought onto the porch to be potted.
Then we had to do something with the screen porch. Normally I just try to cover the shelves of plants, and bunch the rest on the table and cover them up. But even though I haven't brought any more plants onto the porch, there seemed to be so many more this year. First we stapled some plastic on the inside, and it looked horrid.
The screen porch is in front of my living room, and I knew that plastic would block the view, as well as look tacky. I called Target, and made sure they had several heavy duty, mildew resistant, clear vinyl shower liners in stock, and off I went to the next town while Ray had his lunch. I have used them before on some lattice, they have been up for years and haven't aged a bit, so I wanted to get some more just like them. I really wanted to put up acetate or Plexiglas removable panels, but this winter being a month or so early, caught everyone off their guard.

We moved the shelves, actually baker's racks, off the porch into my living room, and stapled up the vinyl with screen molding, in that corner. Then we had to move the tables, chairs, and BBQ cart, to do the front and the other corner. Fortunately it was in the 60's, and sunny, while we were doing all this. It took quite a while, up and down ladders, and by the time we had it done, it was 6.15 pm, and our knees and backs were telling us to quit. So my living room looks like a green house until tomorrow.

And tomorrow is another day.
Posted by LakeConroePenny,TX at 9:02 PM