A Beautiful Day. Virus. B+ RVs

It started out warm, and Bobcat was out on her porch at 6.30am. It went all the way into the high 70's, and wasn't humid. Only just now did I close the windows and drapes, at nearly 7.30 pm.

MaeMae still keeps on running to the door wanting to go out. I know she wants me to take her for a ride in the Puddle Jumper, but it's leak is not fixed yet, and she is too small to see out of the truck windows. Tomorrow she is going to stay with Jay's mother's neighbor for a while and play with their dog, Muffie. She doesn't actually play with Muffie, as she considers Muffie a dog, and MaeMae doesn't think that she is one !! But it will be a change for her, she misses her "Mom".
I mostly did jobs around the house, laundry and mundane stuff like that. I complained to a company about their cat litter, and I was researching the different things that manufacturers put in litter that is bad for cats. Suddenly it flashed on my screen that my computer had caught a virus, and Microsoft wanted me to pay $49-79 to get rid of it, and keep my computer protected. Then a bell sounded, and a popup said that McAfee had got rid of the virus. Gee, I have never had that happen before, does Bill Gates need a new sports car, or something ? 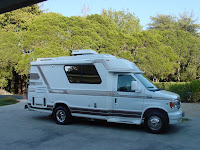 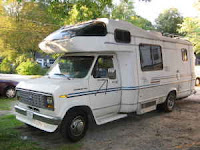 I do spend some time each day looking for a different RV online. After all my years of fixing leaky RV's, I know that I want a molded fiberglass one, or at least one with a fiberglass roof cap that comes over the sides. Then all you have to do it maintain the roof and fridge vents, etc. The sticks and aluminum ones just turn me off, I have worked on too many, and seen the devastation that water can cause. I like the sleek rounded look of the fiberglass ones, too. 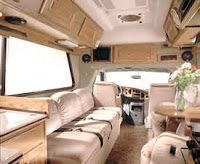 The first picture is a Chinook, and the second is a BornFree. I still have to have a door at the rear, as a side door would be too difficult to use as the MH would be at the back of the three-sided RVport. It is so much easier for me to back it up to a trailer by myself, looking out the back door. Though I would rather have a rear bedroom. This is a picture of the inside of a Chinook. But all the rear door RV's are the same floorplan that I already have in my old B+.
Turning colder tomorrow, so made the best of today.
Posted by LakeConroePenny,TX at 8:28 PM

It was warm here for a few days but last night the temps dropped. I think the hight today will be 49 Are you staying warm??