Yes, it was cold this morning, so I dressed in cotton layers again, it keeps me warmer. When I took the trash to the curb it had rained, and the drops were now ice spots on the walkways, so I was careful where I walked. I never really could get warm all day. I was so sorry for the plants in their 40 deg. porch/greenhouse.

When I was in the next city yesterday, I had to go past a big Chevrolet dealership that has been there at least 30 years. Usually the lot beside the buildings has about 1000 new vehicles on it, yesterday it was absolutely empty. I couldn't believe it, so I called this morning to see if they had moved, and the recording said that the switchboard is closed. I hadn't realized how many people aren't buying new cars these days. Probably because of the credit situation. People borrow more than they should anyway, and get 'upside 'on their loans, or pay ridiculous interest on credit cards. That is no way to live!

I don't buy new, as I don't want the depreciation hit, and I pay cash, so I hadn't realized that things were that bad. Then I heard that another enormous dealership on I-45 towards Houston had gone belly up, too. No wonder the Big Three are having problems, seems they were making more than the people were needing, wanting or could afford to buy. A good comparison to the Pet Explosion. Where are all those new cars going ? There should be some good deals on them somewhere, just like RVs. 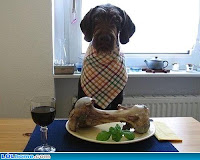 Then, I spent some time looking for a solution to a friend's dog housebreaking problem. They adopted a pound dog, just love her to pieces, but she was probably there because of her lack of house breaking. That would be fault of the person who raised her. Animals, like kids, have to be taught manners. I got engrossed in Victoria Stillwell's videos: http://www.veoh.com/channels/imotd
I can understand the different British dialects on the videos, but then I am from Britain. It was a day to stay inside, I really had chores to do, but I was playing hooky. I used to teach Dog Obedience, so I am appalled at some of the behaviour that pet owners allow, and actually live with it.

Going by my rule of eating the oldest food in the freezer first, I looked up different ways to prepare some Catfish Nuggets without doing them the Southern breaded deep fried way. This one sounded interesting and could be used with any fish: http://recipe.aol.com/recipe/catfish-cakes/83950 or this one: http://recipe.aol.com/recipe/oven-baked-catfish/77343
As I was interrupted during the two hours that I do get off work in the afternoon, I didn't have time to fiddle with either recipe. So I just put the catfish pieces in a foil covered baking pan, drizzled them with Olive Oil Dressing, baked them at 375 deg. for 25 minutes in the toaster oven, while I did other chores. As I already had the Pepperidge Farm dressing out, I just made a small amount on the stove, as it is instant that way. Some veges warmed up in the mike, and I was done.