A Bit Warmer, But Just Piddled on the Computer 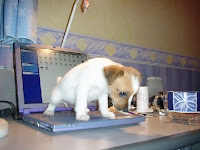 
I meant that I was emailing back and forth to a friend of mine who is also looking for the "right" RV. We were discussing the advantages he would have with an RV he found with 1800 watts of solar panels. He has to start his generator if he is at a rest stop to use his computer, but with 900 watts, he could probably be able to run his fridge, use his computer, coffee maker or microwave through the inverter. If the sun wasn't shining, the engine would recharge the batteries, as soon as he left the rest stop. Inverters are a must, as far as I am concerned.

My Pictures in My Computer needed organizing a bit better, since the computer switch, especially as I have found out some more ways to do it. I also got engrossed in some tutorials by Chris of GeeksOnTour.com about Picasa. She sure knows her onions, as the Brits say! AOL Picture Storage is closing down at the end of the month, so I will probably move all my thousands of pictures there. I liked the way I could file them on AOL Picture Storage, and Picasa has so many advantages over the other picture places. It is fascinating to watch what Chris can do with Picasa. For me, it is well worth the $39 membership to be able watch all of the tutorials, not just some of them. She helps me a lot on their forum, too. I was trying to cook at the same time until the Smoke Detector told me that I had forgotten about the kitchen.

It did get up to the sunny 60's, after some rain. I turned the heat off about noon, but as soon as the sun went down around 5.00 PM, I had to turn it on again.

Tomorrow will be a warmer day.