Another nice warm tank-top day. I started out with a cardigan over it, but soon had to take it off. Bobcat spent a lot of her time on the screen porch. Then she came in and curled up in a doggie bed under the coffee table, until she decided it was dinner time and sat quietly in the kitchen waiting for her canned food.

Ray came to work, and we got lots of little jobs done. He finished painting one of the outside decorative wooden tables. We found some more nail-on feet so that it won't be touching the ground again. He moved the German Shepherd cage and it's wooden bed outside the workshop to spray disinfectant on them, waited the required 10 minutes and then hosed it off. I cleaned the inside of the truck windows, got sidetracked and forgot the driver's side of the windshield.

Jim, the mechanic down the road, has had a shoulder replacement, so he can't do much for six months. I am very honored that he offered to let me use his auto water system testing tool on the Puddle Jumper. ( As long as Jay wasn't here !!) I brought it back here, it is a Matco fancy chrome thing in a case, but none of the adapters in the set fit my radiator neck. Ray and I went back down there with the tool. Jim found another adapter, and that pump up tool is fantastic. Ray did the pumping, and in no time we found out that the water leak is in a metal line under the manifold. So it is not going to be a quick fix, as the 20 year old bolts will have rusted, and might break. He told me that as soon as we have warm weather again, as it is going to be cold again for while, he has someone who will fix it at his shop. Jim knows how I miss using my Puddle Jumper. I use it like other folks use their golf carts around the subdivision. 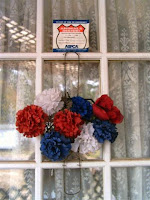 So Ray and I tackled a few more jobs. I have had a red, white and blue flower spray on my front door, and some of the flowers had fallen off. I have been looking for another one like it for a while, but this is the one that my late DH got for 9/11. He died less than 2 months later, so I had got some more flowers and we tried hot gluing them on, only fairly successfully, but it looks a lot better.

One of the pretty wooden hanging plant holders had fallen off the wall with the weight of a plant, and we re-installed that with mollies. We filled up a little hole in the workshop wall where some wires had been run to a 50 amp box for my big RV, which I don't have any more. We just use the 30 amp one now, so all those wires were removed, as they were using two of my house's breaker box slots for my 220 heater. I wanted to be able to use the heater again.

The workshop carpet mats hadn't been vacuumed for a while, and as Ray was doing it he got shocked by the metal handle on the Commercial Hoover. So I used the Shop Vac with extensions, and he used the little Shark with it's turbo extension. But it is not as easy as doing it with an upright. So now fixing the Hoover is on the list. We also got one of the patio door's screen door back on it's track.

I have vent shades on the truck's side windows and the passenger side one had come slightly loose at the back end. So it got glued, and taped to hold it in place for now. One of the "swizzle sticks" had come off one of my bedroom blinds, so that I couldn't turn it closed. We determined that it is broken, can't be fixed, but Ray managed to turn it with just the tiny prong that was still there. So now I have to buy 2 mini blinds, as a dog chewed up one in the dog room. Ray caulked his bathroom windows on the outside, as they are like mine, and face north. By that time the big cage was dry, so we folded it and put it back up in the dog room closet.

It is amazing how great weather gets jobs done, but we are going to have two more days in the 40's starting tonight, and it will be 27 tomorrow night. GRRR!

A busy warm day.
Posted by LakeConroePenny,TX at 5:15 PM