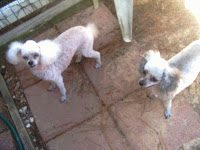 It is a nice sunny, but cool day. Bobcat has been staying on her big shelf at my bathroom window during the day. Once she knows the dogs have been put to bed in the grooming room, she tiptoes into my bedroom, and peers around, looks under the bed, then creeps around to make sure that none of Mindi's dogs have been left in there. Then Bobcat will go to sleep at the foot of my bed. Jakey, on right, used to bark and chase her. He has got that out of his system now, but Bobcat is still wary of that little old dog that weighs half what she does. Jakey is Sheba's son, and they are the two sma

llest poodles, and they don't like to be jostled around by the other ones which weigh 4 times what they do. Bobbiecat doesn't worry about MaeMae when she is here, as they lived together for many years, so they just ignore each other.

After the dogs had their breakfast and spent some more time outside, Sheba and Jakey came in the house, and Sheba just zonked out. I kept on checking on her to make sure she was still breathing. Here she is looking at me in the mirror of the closet door. There are other bigger beds that she could go to, but this one seems to hold her collapsed trachea at the right angle, and she didn't cough for hours. I tried to be quiet as I didn't want her to get up and start that terrible honking cough. (That's my excuse for sitting at the computer, and then trying to take a nap) When she did get up and start coughing I took all the dogs outsi 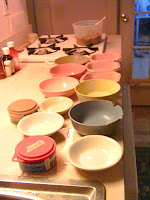 de for a while, and got some more of her medicine down her.

Time to serve eleven little dinners all in a row.
They each have their own dish so that I know how much to put in each one. The blue one is Caesar's but got chewed up by Suggy when she was a pup. He doesn't like any other dish.
Today, 67 years ago, was the attack on Pearl Harbor.
http://en.wikipedia.org/wiki/Attack_on_Pearl_Harbor
I am old enough to remember "a date which will live in infamy."
Just taking care of the dogs and cats today.
Posted by LakeConroePenny,TX at 4:31 PM