The USS Arizona seen burning after the attack by the Japanese at Pearl Harbor, Hawaii, the morning of December 7, 1941. It was 1 p.m. in Washington. (Franklin D. Roosevelt Library, NLR-PHOCO-A-8150(29)) 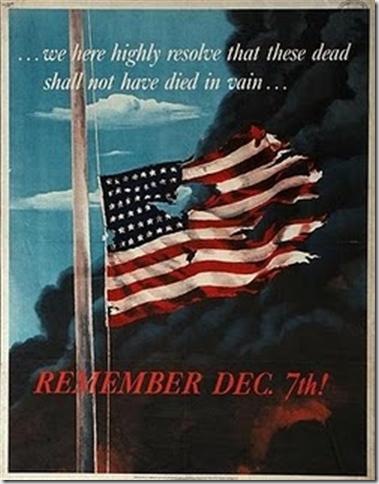 A first draft of the Infamy Speech, with changes by Roosevelt. 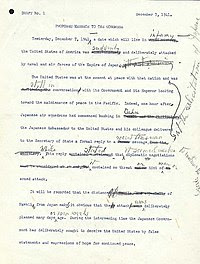 The sun was shining, but as it was still too cold to paint, so Ray was on the roof of Pugsy, the vintage fiberglass motor home.  We wanted to put the half of the luggage rack back on.  We had taken it off ages ago, as there was a leak through the fiberglass roof from one of the luggage rack bolts.  We had patched that a long time ago, and we had all new primer and paint on the roof.  Ray called down and said that nothing was lining up, up there, so I had to get up on the roof, too.

We found out that the PO (previous owner) had messed with the first two holes, and the way they had re-attached it, wasn't the way it was supposed to be.  No wonder it had leaked!  We marked the roof through the screw holes on the luggage rack, and I will have to buy some chrome bolts and acorn nuts.
So that didn't get done.

While we were messing with that, Jay was inside the cargo trailer, supposed to be making a box for the 30 amp cord to nestle into, under the future counter.  When I got down off Pugsy's roof, he had done all kinds of things that just won't work.  He had moved an outlet to where it would be in the way of the 30 amp cord, and cut the hole for the inside of the cord entrance in the paneling, way too big,  so that will have to be redone.

Also, when he had added a piece to the counter top, (not Formica-ed yet), he had glued and screwed it to the top of the counter top instead of the bottom.
He just wasn't with it today! 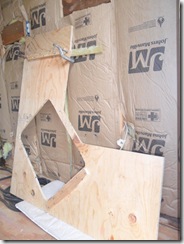 The glue had set in places, and it ripped a small layer of the plywood off the top side, so while I was trying to scrape the little pieces off, I slashed my finger.

We had to glue and clamp those little pieces back in.   To make sure the clamped board wouldn't stick, I wiped it down and lined it with wax paper. That will all have to be smooth before we can apply the Formica.
If it wasn't so difficult to go get one more sheet of really good plywood, I would start over.

I usually stick with Jay whenever he is doing something, and he knows he should have called me before he did his own thinking, so altogether it was a useless half day.
Posted by LakeConroePenny,TX at 1:52 PM

I guess we all have days like you had today, but they do get frustrating.