Do You Want Veggies With That? The Train. Star Wars. Stickers On Produce. Genetically Engineered Food. Cargo Trailer Pics.

Here is a video of a strange veggie market for you:

When you watch this, imagine bringing little kids to work.
Watch to the end to see how they fold down the awnings over the track.

How close to a train track can you set up a vegetable market?

For the Star Wars Fans,  The Store Wars: 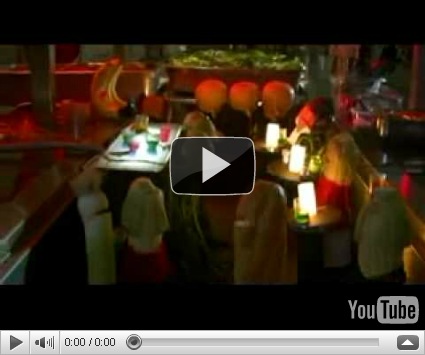 What Do Those Codes On Stickers Of Fruits And Some Veggies Mean?

"Although they seem like a nuisance, the stickers or labels attached to fruit and some vegetables have more of a function than helping scan the price at the checkout stand. The PLU code, or price lookup number printed on the sticker, also tells you how the fruit was grown. By reading the PLU code, you can tell if the fruit was genetically modified, organically grown or produced with chemical fertilizers, fungicides, or herbicides.

Here are the basics of what you should know:

1:  If there are only four numbers in the PLU, this means that the produce was grown conventionally or “traditionally” with the use of pesticides.

The last four letters of the PLU code are simply what kind of vegetable or fruit. An example is that all regular bananas are labeled with the code of 4011.

3:  If there are five numbers in the PLU code, and the number starts with “9″, this tells you that the produce was grown organically and is not genetically modified. An organic banana would be: 94011" 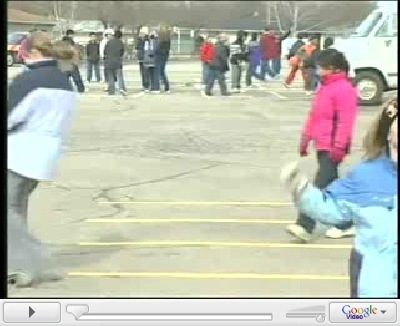 "Dr Michael Hansen said that the way you genetically alter soybeans for example, is that you take a virus and a bacteria and inject it into the soybean.  That way you can spray Monsanto’s Roundup on the soybeans, and they will not be killed.  More than 80% of processed foods in the USA contain corn oil, canola oil, cottonseed oil, sugar beets, papaya, zucchini or tofu – and these are mainly genetically offered in America.

Dr Oz explained that Genetic Engineering works by taking one piece of DNA and swapping it with another piece of DNA, so you make a new species that is altered and will respond differently.  Dr Oz asked Monsanto to participate in this segment, but they declined (of course!)."

"Dr Oz said that GMO Crops have been banned from being grown in 6 countries in Europe: France, Luxembourg, Germany, Austria, Hungary and Greece.  So something is clearly bothering scientists in these countries.

Dr Oz: GMO Foods are Bad for Our Kids?

"Dr Oz asked the bottom line question that all of us want to know – are GMO Foods bad for our children?  Jeffrey Smith said that he works with doctors all over the world, even though he is not a doctor or scientist himself, and there are numerous reports of sick, sterile and dead livestock from feeding them GMO Foods.  I personally would rather play it safe and would definitely like to avoid feeding my family GMO Foods!"

"A genetically modified organism is a man-made, patented, organism created in a laboratory through genetic engineering. It is created when a gene from a totally unrelated species is shot into the genetic material of another species. Scientists worldwide now admit that the rush to sell genetically engineered product has put people's health, property and the environment at risk.

That's why 30 countries have banned, or propose to ban GMOs, including many European countries. In the U.S., Gerber and Heinz baby foods, Frito-Lay, IAMS Pet Foods, Trader Joe's and even McDonald's and Burger King are now refusing GMO corn, potatoes, and other ingredients. Contrary to industry contention, GMOs have increased pesticide use and produced significantly lower yields than natural varieties." From: http://voiceoftheenvironment.org/gmos/

Ray and I turned the exerciser over on it's side, on the crates, so that he could paint the bottom.  Now, it should last for a few more years.  Probably, I could have bought another one at the Salvation Army store for what it cost me to paint mine!  But this one works, and is here, so I don't have to worry about hauling another one, and what would I do with it anyway?

Then Ray sanded the corners on the dinette ledger boards where the table rests when it is let down to a bed.  It is easier for him to do this before they are installed, so they not screwed on yet. 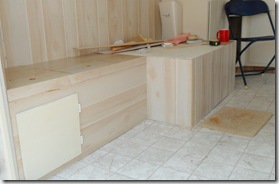 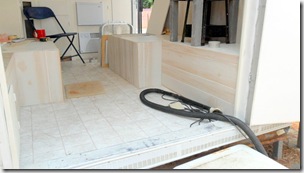 Ray sanded, primed and painted the door-stop at the rear of the trailer, while Jay and I worked on the place for the little emergency Bio-Gel toilet, at the front.

In the storeroom attic we found a piece of Formica countertop that was made of plywood, not particle board, and so we made the toilet's shelf out of that, to bring it up to the right height.  The rest of the plywood bench raises also, so the toilet can be moved over, or turned to a different direction.  I have a curtain to go around it.

That Formica had come out of a mobile home that we worked on about 9 years ago.  We never know what we will need, so we keep anything that might be useful.  Everything gets used up somewhere!

About time I took some pictures, eh?  Then you know we have not been wasting away the days!

Posted by LakeConroePenny,TX at 7:29 AM

Thanks for the food information. Hey, the trailer is looking good.

I got an email from Health Freedom Alliance with this scarry report. You may want to read it. Here is a link:
http://healthfreedoms.org/2011/06/09/germanys-superbug-weaponized-with-black-plague-dna/

The trailer looks better every time we work on it, thanks.

Yes, that is very scary, must have been done on purpose.
Now they are saying that it was in German bean sprouts.
Happy Tails, and Trails, Penny, TX