Chefs Are Boycotting Canadian Seafood until they stop killing the baby seals:

All Star Chefs for Seals.
"Despite some of the worst ice conditions on record and massive numbers of drowned seals, the Canadian government has shamelessly okayed the slaughter of 468,200 seals this year. In response, a dozen celebrity chefs from Bravo's "Top Chef All Stars" are boycotting Canadian seafood to save seals.
Series winner Richard Blais, runner-up Mike Isabella, and fan favorite Carla Hall are among the chefs who have joined the Protect Seals campaign. Please help them save seals." 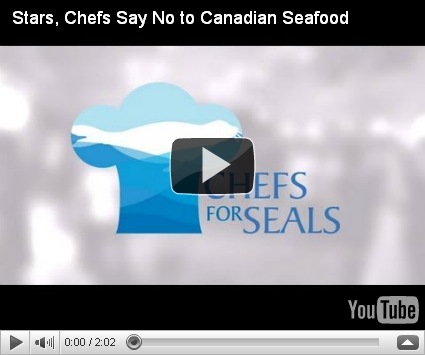 Young phenomenon singer Jackie Evancho in a unique performance at the "Chefs for Seals" event in Beverly Hills to end the Seal Hunt in Canada.  Just listen to this youngster's voice: 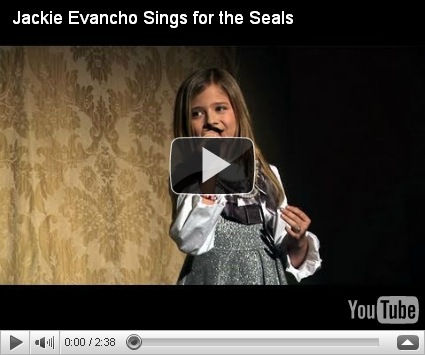 "The ProtectSeals team visited the baby grey seals on Hay Island, a nature reserve off Cape Breton, Nova Scotia. The scene was stunning: baby seals nursed from their mothers while older pups slept and played in the snow. It was an amazing experience, and one I won't soon forget.

Unfortunately, we knew the fate of the baby seals was uncertain. Days earlier, the Canadian government had buckled to pressure from the fishing lobby, and opened the commercial seal hunt on Hay Island. Still, bad weather had kept the sealers at bay. This was giving the seal pups precious time to learn to swim—the means to escape the hunters. With a bad forecast through the end of the week, we thought there was a good chance the pups would all be gone before the sealers could do their worst. 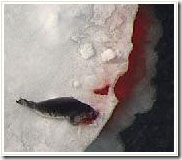 We were wrong, and we are devastated. Today, the weather cleared, and at the break of dawn, the sealers set off for Hay Island. The ProtectSeals team followed closely, determined to expose the cruelty.   Then Death at Daybreak!

From a thousand feet in the air, this slaughter is as shocking as ever.
Beneath us, a fat baby seal lies on a small ice pan. As a sealing boat roars toward him, he looks up, bewildered. A shot rings out, and he is hit. Rolling onto his back, he slides slowly into the water. For a moment, it seems he might be dead. But then, his flippers begin to move as his blood slicks across the ocean.
A sealing boat comes towards him, trapping him between two ice pans. He keeps moving, but the boat continues pushing the ice mercilessly onto him. As the ice crushes his tiny body, more blood spreads through the water, and he moves frantically. Then, a smaller boat arrives, and another gunshot rings out.
Leaning over, the sealers attempt to hook him with a gaff. Finally, they give up and just grasp his flippers and pull him onto the boat. There, on a bloody floor, they club him to death."

Seal's Agony Continues after Gunshot
"In 2008, sealers killed more than 1,000 pups on Hay Island. Two years ago, 200. Today, half of that. Our campaign is working. Markets for seal products are closing around the world, and the prices for seal products remain very low.
Canada can—and will—move beyond commercial sealing. And when that day comes, HSI will be there, on Hay Island, to celebrate with the baby seals." 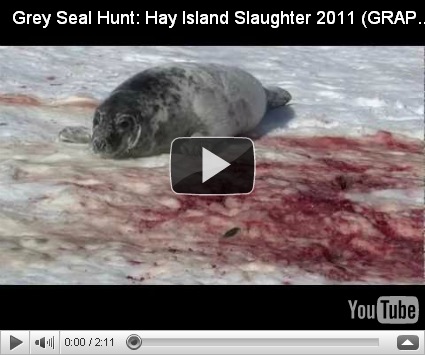 Restaurants and Seafood Professionals Can Help The Seals

Restaurants and companies have power to end the seal hunt. See who is already participating in the boycott of Canadian seafood.        http://www.humanesociety.org/issues/seal_hunt/tips/restaurants_seafood_seals.html
__________________

New economic study reveals why Norwegian whaling is a thing of the past
BOSTON, MASS. – "During the first week of the Norwegian whaling season, three animal welfare organizations released a new economic study, revealing that the Norwegian public’s appetite for whale meat is at an all-time low. The report – from the World Society for the Protection of Animals (WSPA), NOAH-for dyrs rettigheter and Dyrebeskyttelsen Norge – also indicates that Norway’s whaling industry is unlikely to survive without substantial financial support at taxpayers’ expense.

Siri Martinsen, Veterinarian in NOAH-for dyrs rettigheter, said: “The government states that whaling is a non-subsidised activity. Nevertheless, whaling-related activites, such as promotion, marketing and research, are receiving significant government funds. It is absurd that taxpayers’ financial support for whaling is almost as high as the landing value of the meat. These forced attempts to increase the viability of whaling need to end.”

The report highlights the unpopularity of whale meat in Norway, revealing that fewer than five percent of Norwegians eat it regularly. Notably, young people are particularly uninterested in trying whale meat. The low demand is reflected by the whaling industry, which now counts less than 20 vessels taking part in the annual hunt and estimates that less than one percent of fishermen participate in whaling."
From: http://www.wspa-usa.org/media/pressreleases/Norwegiansloseappetiteforwhalemeat.aspx
_______________________

"Anti-whaling harassment, rising diplomatic pressure and a waning appetite for whale meat in Japan could end the Japanese whale hunt.

"Perhaps this is due to Sea Shepherd’s success in diverting the fleet away from hunting grounds. But it's more likely due to the Japanese public increasingly losing their penchant for this tough, chewy meat—a fact borne out by the ‘massive stockpiles of whale meat’ claimed by Greenpeace."
and: http://en.wikipedia.org/wiki/Whale_Wars
_________________

The historical tradition of killing and eating whales is limited to a small number of isolated coastal villages.
In fact, in some regions of Japan whales were once worshiped and never eaten (an aspect of Japanese culture that is somehow overlooked in this conflict).
Since the start of the 20th century, Japanese whalers have used Norwegian (not traditional) industrial whaling techniques and technology in order to maximize profits like any other modern industry.

Now, if we can just stop whaling in Iceland, too:

"In February, thousands of WSPA supporters petitioned the U.S. Departments of Commerce and Interior to help stop Iceland's defiant whaling program.
While we're optimistic that the U.S. will formally identify, or "certify," Iceland under the Pelly Amendment - thereby allowing President Obama to impose trade sanctions on Iceland - it's critical that we continue to keep pressure on the U.S. government to ensure that Iceland's whaling program is stopped.
So, we are asking for your help once again - this time by sending a message to Acting Assistant Director, Teiko Saito of the U.S. Fish and Wildlife Service (FWS). If you haven't already done so, please contact FWS today and politely urge them to certify Iceland under the Pelly Amendment."
____________________

Jay and I worked on making the table for the dinette in the cargo trailer.     We have made plenty of RV tables, but as I thought this one should have four radius corners, it was a learning trial and error process.  We got some ideas from the one that is in my B+.  The top and edges will be covered in Formica the same pattern as the countertop.

But the rounded corners can't be too small or the Formica might not stay on indefinitely, and pop off.  Usually to make rounded corners we trace the base of a coffee can, but this time I used a bucket for the template!  We will have to heat the Formica edge strips that go around the corners of the table, to preform them.

It is still hot, still no signs of rain here, but there are so many people in other areas saying:
"Rain, rain, go away, come back again another day".
Posted by LakeConroePenny,TX at 7:03 AM

The jet stream has blessed us with way too much nice weather and sent all the rain elsware. You know what they say about too much of a good thing!!