Cute video about some robins caring for their young, taken over a 4 week period,

"The White-browed Tit-Spinetail exists only in threatened Polylepis woodlands in the Andes of southern Peru. This lively bird forages actively through the trees, sometimes hanging from branches like a chickadee or titmouse.

Its specialized habitat is under siege as local people harvest Polylepis for fuel, and domestic animals and fires inhibit the natural regeneration of these trees.

ABC and its partner ECOAN are working with local groups and communities to protect Polylepis woodlands where the White-browed Tit-Spinetail is hanging on to existence.

ABC and ECOAN have worked with over 20 communities in the Vilcanota Mountains near Cuzco to restore and protect remaining habitat for this and other Polylepis-dependent bird species. Project successes include the creation of seven community-owned reserves totaling over 15,635 acres (two of which were recently established in April 2011) and planting of over 400,000 Polylepis saplings ."

Learn more and help ABC and other Polylepis inhabitants!

"Native seabirds such as the Laysan Albatross and Wedge-tailed Shearwater will benefit from a just-completed predator-proof fence that creates a 59-acre area enclosure at Ka'ena Point Natural Area Reserve located at the northwest tip of the island of O'ahu, Hawai'i.

The 6.5-foot-high fence is the first of its kind in the United States. The same system has been used successfully in 30 New Zealand coastal and forest projects and underwent earlier testing on lava flows on the Big Island.

The fence provides a combination of features including fine mesh, a rolled hood at the top, and a skirt buried underground, designed to prevent animals from jumping, climbing, squeezing through, or digging their way under the fence and into the protected area.

Ground-nesting seabirds in the area have been targets of dog, cat, and mongoose predation for decades, with the result that up to 15% of chicks are preyed upon each year. The predators have especially preyed on the young birds before they can fly. Rats have also had an impact, eating seabird eggs and chicks, and even attacking adult birds. Rats and mice also eat endangered native plants and seeds causing additional habitat degradation.

Every effort was made to take traditional Hawaiian cultural issues into consideration in the building of the fence. For example, access doors were incorporated at locations where the fencing crosses existing trails at both the Mokulēia and Waianae entrances, and fence designers worked with local Hawaiian cultural leaders to provide a third door above the Leina a ka Uhane, (spirit leap), where traditional beliefs hold that Hawaiian spirits leap into the afterlife."

"The eaglets hatched on April 2, April 3 and April 6 in front of an audience of tens of thousands. The site has garnered more than 70 million hits so far. 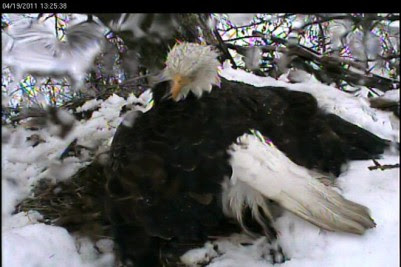 The eagle family has weathered its share of hardships in the last months. A snowstorm on April 19 iced over one of the cameras and left the eagles damp and shivering. Although the eagles looked miserable, the storm was probably worse for anxious viewers than the eaglets, Anderson said.

“People were calling the police department and telling them to put umbrellas over them,” he said. But the parents “just did a marvelous job. They just stood there and sheltered the eaglets.” "

Jay and I went into the next town for the weekly shopping trip.  There weren't too many things on my list, but the main one was a deep-cycle battery for my motor home.  We took the old one with us in a tray in the back of the van to make sure we got the right size, and also to avoid the $20 core charge.

I have had the present batteries since 2005, and they quit doing their job a long time ago.  Probably because I don't have a 'smart converter'.  Usually my late DH and I would buy them at Walmart, as they would replace them free under warranty, no matter where we were.  At least Walmarts are easy to find all over the country.  But I hadn't taken these in when I should, so I was going to have to buy all new ones.

Until these foster pets are adopted, I can't go on any trips, so I was just going to buy some reconditioned ones at the Interstate distributor near us. They didn't have a recon deep cycle the right size, so I did the next best thing, I bought a recon one for the chassis, $40 with taxes.  I didn't relinquish my old deep cycle, still need it for a match, so now when we go to Conroe again, I can get the core charge back.

I have a momentary switch in the motor home, so I can temporarily use either battery for starting the motor or generator.  Now, maybe we can find out if the auxiliary fuel pump works.  After my MH has been sitting, I have to use that pump to get it started, and it hasn't been clicking lately.  Replacing bad batteries solves a lot of problems.

We quickly whipped through three thrift shops, but I found some light weight slacks, light weight shorts, and two tops. Even though they were having their end-of-the-month sales, we walked out of two of the stores empty handed.

Not really being in a shopping mood, we didn't even go to Petsmart or Krogers, but we did stop at our local little grocery store to pick up some bananas and found some bargains in the produce dept.  Zucchini, radishes, bananas, onions, and watermelons.  One more stop at the feed store to buy some real free-range organic eggs, brought in by the local farmers, for $3 a doz.  Each box has different color and size eggs, so I know they weren't factory farmed.

But we really just wanted to get home, as it was a very hot day.

Posted by LakeConroePenny,TX at 8:16 AM

I know somewhere along your blog I have read who Jay is, but would you mind repeating it? Is he your son, or brother, or just a good friend? Thanks for sharing all the good information you share with us. I do read your blog all the time, even though I don't always comment, I really do enjoy reading all of your news articles.

Hi Pidge,
Jay is my neighbor's son. She is my friend and the lady who had the liver transplant a couple of years ago. I have known them since January 1995, and Jay has helped my late DH and me, on and off for all those years. He doesn't have a vehicle or driver's license any more, and so he likes to go into town with me, knowing that I will NOT carry his beer in my vehicle. He doesn't drink in the mornings any more, so he is polite and pleasant to be around then, but his mother is very stressed out in the evenings.

Since I had all that trouble, family sickness, granddaughter's death, my dog's death, taking care of 17 Llasa Apsos as another neighbor had a stroke, etc. all in February 2006, which gave me that temporary heart trouble, (atrial fibrillation) I do not like to drive alone. So it comes in handy that he wants to go with me, especially as he also likes to go to thrift shops. He is helpful when I have to load heavy things, too!

It keeps him out of his mother's hair in the mornings, and keeps him sober while he is with me. It is a shame that he wastes his life like that, but we keep on praying that one day he will stop drinking.