For "Winged Wednesday": Bees are winged, too!

By now you've probably heard about Colony Collapse Disorder and the crisis of the vanishing honeybees. So you know that pollinators like these are crucial to the health of our planet.
Here are some tips to help the bees, as well as hummingbirds, bats, and other wildlife that keep flowering plants flourishing.

• Create a pollinator-friendly garden.
Help feed pollinators by planting your garden or window box with what they love best: a variety of locally native flowering plants. Learn more from the U.S. Fish and Wildlife Service.

• Avoid using lawn care products containing dangerous pesticides.
Every year, U.S. homeowners apply 80 million tons of pesticide-containing synthetic fertilizers to their lawns. Many of the most common lawn pesticides pose risks to human health and the environment and are toxic to birds and bees, too. Learn more from the National Coalition for Pesticide-Free Lawns.

• Support farms that use safe agricultural methods. Shop at your local farmers market, join a Community Supported Agriculture program, or buy organic produce. Check out the USDA's map of farmers markets across the nation, or a local database of markets in your area. "
_________________

"The Pink-footed Shearwater breeds only on Isla Mocha and two of the Juan Fernandez Islands off the coast of Chile. Like other shearwaters, this species nests in colonies, in burrows up to four feet long that the birds dig themselves.
This ground-nesting habit makes the Pink-footed Shearwater especially vulnerable to introduced mammalian predators such as rats and cats, and to trampling by grazing mammals such as cows. Human inhabitants of Isla Mocha harvest the chicks for food, perhaps at unsustainable levels.
The diet of the Pink-footed Shearwater consists of fish, squid, and possibly crustaceans. These birds also follow fishing boats, putting them at risk of being hooked or tangled in fishing gear.
ABC and partner group Oikonos are working with local groups to reduce chick harvesting on Isla Mocha and to restore habitat on Robinson Crusoe and Santa Clara in the Juan Fernandez Islands. We are also investigating bycatch risk by examining the birds’ overlap with fisheries along their journey north.

This year we are following nine adults with satellite transmitters.  You can track their progress by clicking here."

The Challenge
"Seabird bycatch from commercial and artisanal longline fisheries is decimating seabird populations on a global scale. Additional threats to seabirds, including predation by introduced mammals on seabird breeding islands, marine trash, poisoning from pollutants such as lead, and potentially global warming, have made seabirds the most threatened group of birds on Earth.
An astounding 19 out of 22 species of albatross have now been flagged by scientists as vulnerable, endangered, or critically endangered. American Bird Conservancy is the only U.S. national bird conservation group working throughout the Western Hemisphere to solve these problems for albatrosses and other seabirds."
Click here to learn more about ABC's Seabird Program
______________________

Soon, No Rats on Rat Island: Seabirds to Benefit

"In the coming year, an island that has been an ecological wasteland for over 200 years will start on the road to recovery. In 1780, a Japanese ship ran aground on what is today called Rat Island, and rodent stowaways jumped ship to find a rat paradise. In 1922, Arctic foxes were stocked on the island by fur ranchers, further adding to the devastation. Prior to these two introduced predators, the island held thousands of nesting seabirds, including Fork-tailed Storm Petrels, Whiskered Auklets, and both Horned and Tufted Puffins. These birds were easy prey because their nests or nesting burrows remain unguarded while the parents forage at sea. The rats ate the eggs, killed the chicks, and harassed the parents until almost no seabirds returned to nest on the island.

Island restoration began in 1964, when the foxes were eradicated, and now, a solution to the rat problem seems to be at hand. The Nature Conservancy is collaborating with FWS and Island Conservation to remove all the rats from the island. Rodent eradications have proven incredibly successful at other sites.

The endangered Xantus’s Murrelet saw an astounding 80% increase in nesting success when introduced rats were removed from Anacapa Island (Bird Calls Vol. 7, No. 2). However, the process is not easy. It takes years of evaluation and planning to select a target island and plan the removal effort. The Rat Island Environmental Assessment was completed this year. Removing rats from the island is also expensive. In this case, funding will come from public sources and dozens of private donors.

Rat Island is one of the Aleutian Islands, which are collectively designated by American Bird Conservancy as a Globally Important Bird Area because of their importance to seabird populations. Three of the Aleutians support more than one million birds each. There are several other islands in the chain with infestations of rats, but the next target has yet to be selected. Each island presents its own potential rewards and challenges. The size, the value to nesting birds, the presence of other invasives, the cost and the risk of reintroduction are just some of the factors to be considered. For more information, visit http://www.islandconservation.org/."
__________________

The first day of Summer didn't bring us any rain, as forecast.  Now, the days are going to get shorter, until we get to 'early dark' again. But we have three months of hot, humid weather to get through first. 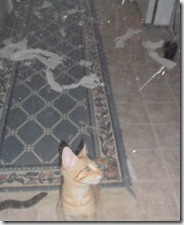 A lady is interested in my little "Pal", orange tabby, and possibly one of his little sisters, too.  As you can see, they got hold of a toilet roll.  Picture isn't the best, as it was through a glass door.  Anyway, they will all go to meet their prospective new  "Mom" on Friday.

So I haven't made their appointment to go to the Houston SPCA yet.  If two get adopted by the lady, then that will leave one who would be very distressed to lose her siblings and her present "Mom", me, all at once, so I couldn't take whichever sister is left over to the SPCA.   I think it would be little Precious, tabby/white, as she is the shy one.  They never saw their real Mom, as they hardly had their eyes open when I got them, so I am the only Mom they know.

I am prepared if there is only one kitten left.  I will bring a sturdy table down from the attic, and put a big cage on it, in my never used dining area, and shut down the Middle room and Grooming room AC for these hot months coming up.  Prime came to live in the house when Patches was adopted, so that I could shut down those two rooms, to save on utilities, but then the kittens arrived.  I have to have the cage up on something, as it too difficult to tend to it on the floor. The kitten would only have to be caged when we are working when doors are opening and closing, as we run in and out to refresh our cold drinks.

This morning when I got up, IT WAS RAINING!  Wonderful!  That will settle the dust, and lessen the chance of fires.

Looks like it will drizzle all day.
Posted by LakeConroePenny,TX at 6:35 AM

There you go Penny I sent the rain your way. We are on the second day of sunshine after about 30 straight days of wet. I wish we lived closer I would take that last kitten off of your hands but I am sure someone will take her she is so cute.

Glad to hear you got that ziplock bag of rain I promised you!!! Let me know when you need another

Oh, Brenda and Jenny, what wonderful friends you are.

Thank you so much for the rain, we haven't seen any for 148 days.

Happy Trails to you both, Penny.