"For reasons scientists don't yet understand, the population of Rose-ringed Parakeets in Britain has increased from 1,500 in 1995 to an estimated 30,000 in recent years.

The Rose-ringed Parakeet, native to the Indian subcontinent and sub-Saharan Africa, did not fly to London from those far-off places. Rather, it is widely assumed they either escaped from their British owners or were intentionally released.

What is confounding experts is the population explosion in these birds over the last decade. Where they were once considered exotic rarities, these days the parakeets are viewed as pests and a potential threat to crops.

Some of the theories as to why the birds are able to so rapidly proliferate include:

Researchers at Imperial College London are attempting to get a more accurate count of the current population of birds through Project Parakeet. According to The New York Times:

British officials are watching trends closely since the parakeets have proved major agricultural pests elsewhere, ravaging crops in places like India. So far, they have shown little predilection for leaving Europe's cities and suburbs for agricultural areas. (Far smaller flocks of rose-ringed parakeets have also arrived in other European cities like Brussels and Amsterdam.)

If you are thinking about getting a parakeet, here are tips for it's care: http://healthypets.mercola.com/sites/healthypets/archive/2011/06/21/british-parakeet-population-boom-has-experts-stumped.aspx

What to do if You Find a Baby Bird

Veterinarian, Dr. Karen Becker explains what to do if you find a baby bird that has fallen from its nest or is separated from its parents. 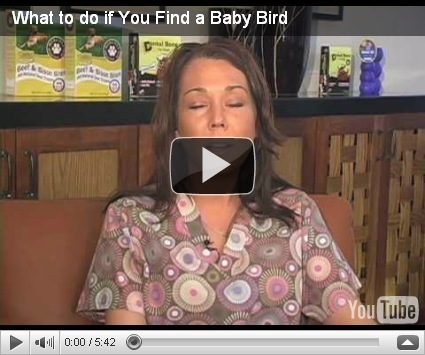 What NOT to Do If You Encounter a Fledgling

"Fledglings are more often "kidnapped" than nestlings because people who find them hopping around on the ground alone assume they've been orphaned rather than blown out of their nest.

If you see a fledging, you might be tempted to capture it to get it out of harm's way.

You might look around for the young bird's parents, not finding them, you assume the baby is an orphan and you approach it.

It's rare, but there is a slight chance you could be dive bombed by a mother or father bird as you get close to their baby. If that should happen, it's your cue to leave the fledgling alone.

In most cases, however, you won't see or hear the parents. If you capture the baby to remove it to what you believe is a safer location, what you're unintentionally doing is kidnapping the fledging from its mother and interrupting its natural development.

What you want to do instead is simply keep pets and children away from the area where the fledging is hopping about.

The mother and father will continue to support their young bird from a distance and within a relatively short time the fledgling will develop the breast musculature and feathers it needs to fly away to its life as an adult bird.

Should You Keep It?

Many people who rescue a wild baby bird are tempted to keep it and raise it themselves. There are a few problems with that approach.

First you need to be aware that not all birds are alike.

Nutritional requirements depend on what species the bird is. For example, some species of baby birds eat worms and bugs.

But if the baby bird in your care is a seed-eater, worms can be toxic. (That's why I warn against feeding a bird you've rescued before you contact a licensed professional to determine next steps.)

It's crucial that you know not only the species of bird, but also its metabolic requirements and what it can safely eat. This is information you should only get from a licensed professional. Guessing at the species of a baby bird or what it can eat can quite literally be deadly.

And did you know it's against the law to raise wildlife without a license?

If you're interested in becoming a licensed wildlife rehabilitator, you can get more information on that subject, as well, at NWRAWildlife.org."

"The Greater Sage-Grouse has declined by more than 50% over the past 50 years; more than 40% of its historic range is no longer occupied. Overgrazing, sagebrush removal, and the presence of invasive plants (e.g., cheatgrass) have degraded and fragmented habitat. Expanding energy development, particularly wind and natural gas, presents a growing threat, especially near the birds’ strutting grounds (leks), where their distinctive booming courtship rituals echo across the landscape each spring.

The government recently ruled that listing the species as threatened was “warranted but precluded” by other priorities, meaning that this declining species continues to receive no federal legislative protection. However, conservation plans in western states include strategies to protect “core areas” for the species on the 70% of their remaining habitat on public lands, and recent efforts are directing federal incentives to improve management on private lands.

ABC is working to ensure no net loss of suitable sage-grouse habitat, while maintaining or expanding the size and distribution of grouse populations. ABC is also working to ensure that wind energy development does not further harm Greater Sage-Grouse and their habitat."

One of our SPCA foster moms arrived at 6.30 AM to pick up my kittens to take them for their spay/neuter surgeries.

When I went to pick up Jay he had caught someone's Dachshund in his trap, so he turned it loose.  That dog must be hungry, or stupid, as it is the second time he has been trapped.  So much for our leash laws.

Then we started on the kitten's cages.   We carried the big cages outside to our 'wash bay', and I sprayed them down with bleach water, and let them sit while we vacuumed and mopped the Middle Room and Grooming Room.  I laundered all the blankies and soft toys in disinfectant, and washed that bathroom's rugs while I was at it.  The 'hard' toys were just soaked in soapy bleach water.

Now, I would like to point out that not all bleaches say "Kills 99% of Common Germs", so you have to look at the label.

Many of them, including the scented ones, are not a disinfectant, but they will whiten clothes.

As Pal's surgery isn't as severe as the girl's, he only has to stay locked up for about a day, so he will be in a small cage.  But the girls will have to be kept quiet for about a week, after all they had ovariohysterectomies (removal of the ovaries and uterus).   If you want to see how the surgery is done, and you aren't squeamish: http://www.lbah.com/feline/cat_spay.html 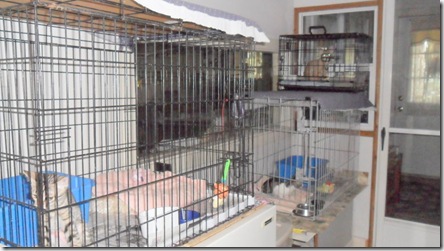 Now the clean cages, clean litter boxes, clean toys, and clean beds are all set back up in a nice clean room, waiting for the kittens to come back from the vet.

They must not jump up or down off anything for the first 10 days, so that is why they are going to be locked up for a while.

Here they are, home again:

Pebbles, front, is groggily investigating everything.

Precious, back, hasn't moved off her bed.

I wanted to keep them separated, as I have to make sure that their plumbing is working OK.

That's Pal up in the small top cage, he has a litter box in there that you can't see.  I will probably double up the girls, and put him in a bigger cage when he isn't so woozy. 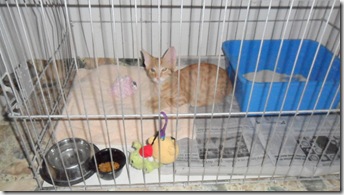 Oops, that had to be done right away, as in his disoriented state, he knocked his water bowl all over his little blue bed.

I hope he doesn't get a complex sleeping in a pink bed. 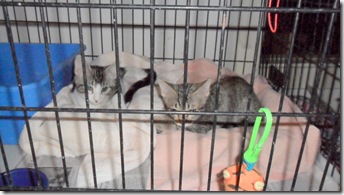 I quickly had to get another pink bed for the girls.

As you can see, there is a window in the wall between the rooms, so I can keep an eye on them.

The kittens, and I, had a busy day.

Posted by LakeConroePenny,TX at 7:10 AM