"My budgie, Chi-Chi, recently learned how to fetch his favorite toy and put it in my hand." 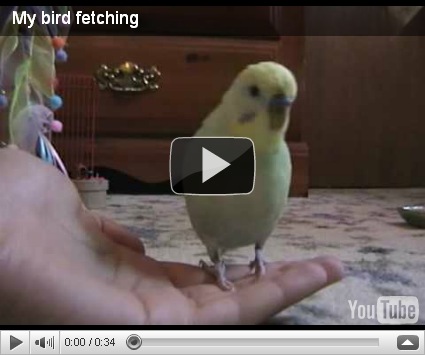 "The elusive Bicknell’s Thrush, formerly considered a subspecies of the more common Gray-cheeked Thrush, is one of the most range-restricted birds in North America, breeding only in coniferous northeastern forests near the treeline.
This species is at risk from threats to its breeding habitat, including development, acid rain, and climate change. Its migration route is not well-known, but is assumed to follow a flyway along or near the East Coast of North America.
Potential threats during migration include collision with man-made structures such as communications towers, buildings, and wind turbines. Loss of Bicknell’s winter habitat has been severe and is ongoing due to agricultural conversion, logging, and charcoal production.
ABC is working with industry representatives, the federal government, and other conservation groups to find solutions to reduce bird collisions, and has been conserving wintering habitat for the Bicknell’s Thrush in the Dominican Republic’s Sierra de Bahoruco National Park by securing and expanding park boundaries."
____________________

Father's Day is this Sunday.

"The simple things you do every day, from the cup of coffee you drink in the morning to the lights you turn on at night, all have an impact on birds. As we human beings expand our presence on the earth, our lives intersect more and more with the wildlife around us.

Our everyday activities increasingly erode their habitats, deplete their food supplies, and create new dangers for them to face. If we want to protect the birds around us and preserve their future, we need to begin to conduct our lives with a consciousness of how our actions affect the world around us; not only the people, but the wildlife, the air, the water, and the land.

"As warmer temperatures begin to arrive, American Bird Conservancy (ABC) often gets asked how people can help birds. Toward that end, ABC has identified the top ten things people can do to aid or protect declining birds in their homes and yards:

10. Join a bird conservation group such as ABC—learn more about birds and support important conservation work.
9. Support bird-friendly legislation—Example:  HR 1643, a proposed bill that provides for bird-friendly federal buildings. Take a look at the ABC action center.
8. Keep feeders and bird baths clean to avoid disease and prevent mosquitoes from breeding.
7. Buy organic food and drink shade-grown coffee—increasing the market for produce grown without the use of pesticides, which can be toxic to birds and other animals, will reduce the use of these hazardous chemicals in the U.S. and overseas.
6. Reduce your carbon footprint—use a hand-pushed or electric lawnmower, carpool, use low energy bulbs and Energy Star appliances. Contact your energy supplier and ask them about purchasing your energy from renewable sources.
5. Donate old bird watching equipment such as binoculars or spotting scopes to local bird watching groups—they can get them to schools or biologists in other countries who may not have the resources they need.
4. Create backyard habitat—if you have a larger yard, create a diverse landscape by planting native grasses, flowers, and shrubs that attract native birds. You will be rewarded by their beauty and song, and will have fewer insect pests as a result.
3. Eliminate pesticides from your yard—even those pesticides that are not directly toxic to birds can pollute waterways and reduce insects that birds rely on for food—and try to buy organic food when you can. Learn more at http://www.abcbirds.org/abcprograms/policy/toxins/what_you_can_do.html.
2. Prevent birds hitting your windows by using a variety of treatments to the glass on your home. Collisions with glass constitute the biggest source of bird mortality, as many as one billion each year. See ABC’s new flyer at www.abcbirds.org/abcprograms/policy/collisions/pdf/collisions_flyer.pdf
1. Keep your cat indoors—this is best for your cat as well as the birds, as indoor cats live an average of three to seven times longer. Cats are not native to the U.S. and are responsible for hundreds of millions of bird deaths each year.  Some species have gone extinct because of cats! Even well fed cats kill birds, and bells on cats don’t effectively warn birds of cat strikes.

According to ABC, birds need our help now more than ever.  In addition to the ongoing threat of loss of habitat, millions of birds are directly killed due to a number of different human-related causes. Scientists estimate that 300 million to one billion birds die each year from collisions with buildings.  Up to 50 million die from encounters with communication towers.

Another one million may die EACH DAY from attacks by cats left outdoors. Some of these deaths occur year-round but many occur during the peak spring and fall migrations. Some studies suggest that perhaps as many as half of all migrating birds do not make it back to spring and summer grounds, succumbing to various threats on either end of the journey."
More at: http://www.abcbirds.org/newsandreports/releases/110421.html
____________________

A Bald Eagle suffers from poisoning caused by scavenging on spent lead.

"Editorials by leaders in the hunting and fishing community, findings from several new studies, and action by the U.S. military, should force Members of Congress to re-evaluate proposed legislation that would prohibit the Environmental Protection Agency (EPA) from regulating lead in ammunition used for hunting, says American Bird Conservancy (ABC), the nation’s leading bird conservation organization.

Paul Hansen, former executive director of the Izaak Walton League of America, began his editorial in the Aspen Times by saying:

“It is time for those of us who hunt to quit using outdated lead bullets and start moving toward high-tech copper bullets—even if they are more expensive.

Lead bullets are bad for everyone: They contaminate the meat we bring home as well as the gut piles we leave behind, and they also poison any scavengers that consume the contaminated meat.”

Ted Williams, editor of Fly Rod and Reel Online, said in Audubon Magazine that:”Despite cheap available alternatives most American sportsmen are still using lead ammunition and fishing tackle. Because of this, some of our most majestic birds, from eagles to loons to condors pay a terrible price.”"
More at: http://www.abcbirds.org/newsandreports/releases/110520.html
____________________


Jay caught another feral kitten in his trap, and then I caught two more.  Animal Control came and picked them up.   As one cat makes 400,000 cats in ten years, that is One Million Two Hundred more homeless feral cats that won't be spreading deadly cat diseases, or killing birds and lizards.

Animal Control does take the cream of the crop, test for disposition, deadly diseases, vaccinate, spay/neuter, and put them up for adoption, but we do not know what happens to the individual ones we give them. We hope that they get a chance for adoption.

Ray was painting, while Jay and I messed around with the cargo trailer's dinette table some more.

We were trying to copy the table in my B+ motor home, (picture left), except it would have four radius corners. The idea was to put reinforcing around the edge, and Formica that, just like the picture.

But the plywood for the cargo trailer table had been cut too narrow, so Jay was trying to add to it, that meant that the corners didn't come out right.  Then he cut some little corner slivers out of plywood and screwed them on.  Whatever he had done the previous day wasn't working, and the table looked a mess.

It is so easy, but things kept on going wrong.  Then Jay had the idea that he could make the curved corners out of a 2x4 on the table saw, needless to say that didn't work out either.  Having made lots of tables, I knew there is a good reason why reinforcing curves are made of plywood or particle board, because it cuts easier than lumber on radius corners.   Easier to start over, so I scrapped the whole table, and gave up in disgust.

So a new sheet of plywood is on the list for the next shopping day.
Posted by LakeConroePenny,TX at 6:46 AM

Sometimes it is best to get a new piece of plywood and start over. Fasten and glue second pieces of plywood below the four corners and cut the radius on both at the same time. Worked for me.

Thank you for your comment, Dick
Yes, that is the way I wanted to do it, as it always worked out great for me before.

But Jay sometimes wants to do his own thinking.
Unfortunately his front lobe (the logic part) is damaged from his drinking.
Sometimes he just has to learn the hard way.
Happy Tails, and Trails, Penny.