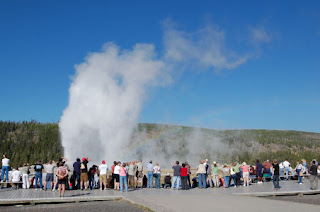 "An alert webcam viewer halfway across the country tipped off rangers in Yellowstone National Park this week when he saw members of a tour group walking on the Old Faithful geyser cone. When park rangers arrived they found about 30 people walking around the geyser cone and taking pictures.
"They're out there in the evening walking in this fragile area near a geyser that erupts every 90 minutes," a ranger said. "When you're putting out thousands of gallons of scalding hot water that can spew hundreds of feet into the air, people could have been seriously hurt."
Park rangers issued three citations for being off-trail in a thermal area. The $125 tickets were issued to the group leader, the bus driver, and one other person. Group members said they didn't see any signage indicating the dangers or the park's rules that visitors stay on the boardwalk, though signs are prominently posted throughout the area--and should be common sense to most people."   http://www.nationalparkvisitor.com/2011/05/tickets-issued-for-tourists-walking-on.html
What were they thinking?

The 10 Best Places to Watch The Sunset Around The World

See The World's Most Beautiful Sunsets.

Photo: Microsoft Bench at sunset
"If you accidentally catch one, you suddenly become incredibly calm, contemplative and feel like you’ve snuck in on a romantic moment—I’m talking about sunsets. And snuggled up couples have been watching them since long before Glee and American Idol took up our evening free time. Some of us still skip out on modern entertainment just to go watch the sunset. Some people are sunset connoisseurs, constantly seeking out the highest rooftop, quietest beach, or most off-limits location to sneak into and watch it. For those of you out there, here are 10 spots to watch the sunset that have probably appeared on a postcard."

Ayers Rock in Northern Territory, Australia "The sky is streaked in red here when the sun goes down. That is because Ayers Rock is the seat of Uluru, a 348-meter high, 500 million year old red rock and the world’s largest monolith. When the clouds move across the sky at sunset, they reflect the rock’s blood-orange hues into the sky."

Photo: Google Earth Ayers Rock Australia
------------------
Academia Bridge in Venice, Italy "Of course one of the most romantic cities on earth offers one of the best spots to catch the sunset. Academia Bridge stretches over the Grand Canal, and from here you can watch the dying rays of light flutter across the 15th century architecture. For a more ethereal feel, go in the fall when fog makes the whole place feel like an old mystery movie."

Photo: Microsoft Sunset in Venice, Italy
-----------------
The Matterhorn in Zermalt, Switzerland "No, it’s not just a ride at Disneyland. The Matterhorn is a great Alpine peak. Visitors can hike across Gornier Glacier to Monte Rosa Hut for the best view. It’s best caught at sunrise, when the sunbeams climbing up the peak light up the tip to make it look like a candle."

Photo: Microsoft Alpine Peak Switzerland
----------------
Mallory Square in Key West, Florida "Also a favorite spot for locals, Mallory Square pairs the view of the sun setting over the Gulf of Mexico with street performers, amazing food vendors, and the freedom to enjoy them all with a mojito in hand."

Photo: Microsoft Romantic couple at sunset
-----------------
Masai Mara in Kenya "Catching the sun set here might bring back memories of a beloved childhood film, The Lion King. This is a great destination for wildlife lovers as a large wildlife migration passes through. Elephants, rhinoceros, Cape buffalo, leopards and lions get particularly active and night time and visitors can watch their silhouettes move across the sun setting over this vast desert."

Photo: Microsoft Wildlife at sunset
---------------------
Gay Head in Martha’s Vineyard, Massachusetts "The sun can play with a variety of shapes and colors here. Clay cliffs peek out of the Atlantic Ocean and North America’s last glacier disintegrated here 10,000 years ago, leaving behind boulders and clay deposits. From the lighthouse, you can watch the sun move across this entire scene with water on three sides of you."

Photo: Microsoft Gay Head Martha's Vineyard
----------------------
Pre Rup Temple in Siem Reap, Cambodia "Already a popular destination for visitors because of its majestic temples, Pre Rup has reflective pools that face west. When the sun sets, the pools catch the reflection of these enchanting structures and light up with the rusty red from the brick and laterite." 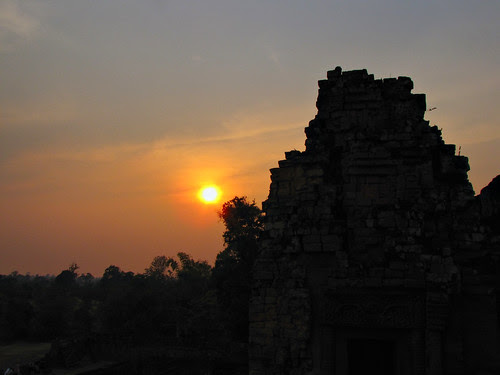 -------------
Mount Heleakala in Maui, Hawaii "Mount Helealaka is a dormant volcano that rises over 10,000 feet. The volcano serves as the only display of colors on the baron landscape when the sun rushes over it’s blackened sides, lighting it up like water on hot asphalt."

--------------------
Sentosa Island, Singapore Sentosa is a small island just off the coast of Singapore.From the shore, visitors can watch the sun set over the dozens of oil refineries sitting on the water, with their rising smoke playing off different colors in the sun.

Photo: Microsoft Oil Rigs in Singapore
-------------------
Santa Monica Pier, Los Angeles "If you sit on the beach just far enough from the pier, you can watch the silhouettes of people playing miniature golf, the waves crashing, and the lights from the Ferris wheel reflecting on the Pacific Ocean."

"They’re free. They’re accessible to everyone. And somehow, they always enchant us. Hopefully this gives you a good date idea for the next time you’re running low on money or you’ve just seen every movie on TiVo."  From:
http://planetgreen.discovery.com/travel-outdoors/the-10-best-places-to-watch-the-sunset-around-the-world.html
_________________

Jay and I made a short trip into our little town, and so we didn't have much time to work yesterday morning.  It was already getting hot, and we couldn't see the sense in dragging out a mess of tools for a short time.

One thing I picked up in town was a two-holer for a wall phone plug-in.  Oh, it's called a 'Duplex Flush Mount Wallplate!'
Even with the two-holer installed, it didn't matter what we did, if the computer and printer are hooked up into the circuit the phone doesn't ring, it just chirps!   I am still messing with the phone lines to get the corded phone, cordless phone, fax and Dial-Up to work properly.

By checking the ring with my cell phone at every combination, I strung phone cords to other jacks, even in other rooms, in different combinations, but it was always the same.   I used to have another separate phone line here, as all we had was Dial-Up in this area.  Then we got cable, so as it seemed to work alright after a year, I got a thrifty streak, and had the extra phone line disconnected.    Now the cable company seems to having trouble again, so I would like to be able to use the Dial-Up when I have to.  I suppose I will have to call our phone company, Verizon, and see if they know how I can hook it up without the phone chirping.  At least I got all the phones ringing, and not chirping.

So while I was wrestling with that, Jay cleaned the ceiling fans for me, and even vacuumed floors and a bookcase, so it turned into a cleaning day.

Later:  OK, Calling Verizon, and trying to get to the right department, and the right answers, was the usual mess of recorded questions, pushing 1 to speak in English, then "I'll connect you with someone who can help you" routine, getting cut off, and having to start all over again, took quite a while.

But apparently, now one has to pay $25 a month, just to have Dial-Up as a standby, or even use the Fax machine. If I had kept my other phone line, it would cost me an extra $25 a month now, to use it on Dial-Up.   They are going to get you one way or another!  A frustrating day.

Posted by LakeConroePenny,TX at 6:22 AM

I have a dedicated FAX and computer line and a seperate number for our phones. Works well and don't need the filter plugs to filter out the internet noise (since it is on its own line). Guess we will heat to WallyWorld today and get supplies.

That is what I used to have, but now Verizon is telling me that even if I pay for another phone land line and number again, I will still have to pay $25 a month for Dial-Up/Fax service to make it work.

But you have a Consolidated Communications landline phone. I realize that you have to pay for the the other phone line, but do you also have to pay extra just to get Dial-up/Fax, on that line?

Hi Dick, thank you for that info.
But that isn't Dial-Up, is it?

It is through your DSL (broadband) company.

My SuddenLink broadband and cable TV cost about $100 a month. That does NOT include a land line phone. My phone is with Verizon, which is our local phone company.

SuddenLink does also have bundling with a landline, but with as many outages as we get, their customers are going back to Verizon for their landline.

I found out today, as the TV and internet cable is out AGAIN, that when I unplugged my phone and put the phone cord in the 'phone hole' in my laptop, that I can use Dial-up and get online.

That is what I am using right now.