The Biblical commandments concerning the Passover (and the Feast of Unleavened Bread) stress the importance of remembering:

And thou shalt remember that thou wast a bondman in Egypt; and thou shalt observe and do these statutes." (Deuteronomy 16:12)

Exodus 12:14 commands, in reference to God's sparing of the firstborn from the Tenth Plague:

Exodus 13:3 repeats the command to remember:

Remember this day, in which you came out of Egypt, out of the house of bondage, for by strength the hand of the LORD brought you out from this place. 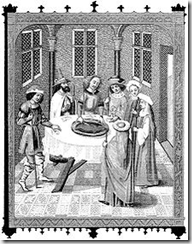 "The answer may seem quite obvious to some of you, but in reality this question has become quite a controversy in the Christian community over the past several years.

But why would that be? After all, isn’t Passover a “Jewish” holiday and Easter a “Christian” holiday? Well, that is not really the case. In fact, the earliest Christians did not celebrate a holiday called “Easter” at all. Rather, they all celebrated Passover. Even after the original generation of apostles died off, many of the early church leaders still continued to observe Passover as described in the Torah, but other early church leaders of that next generation slowly started to move the celebration of Passover to Sunday.

In a letter to the head of the church of Rome, Irenaeus mentioned the controversy that took place when Polycarp tried to persuade Anicetus (a previous bishop of Rome) that the celebration of Passover should not be moved to Sunday…..

So although there was an effort by the church of Rome to move the celebration of Passover to Sundays, those who were determined on practicing it as the first apostles had could not be moved off of the original observance. But eventually, during the time of Constantine, the leaders of the institutional church were strong-armed into observing Passover on a Sunday. Later this celebration came to be known as “Easter”.

But why should Christians celebrate Easter? After all, when did Yahshua die on the cross? (On the eve of Passover) When did Yahshua rise from the dead? (On First Fruits During the Feast of Unleavened Bread) What holiday foreshadowed the sacrifice of the lamb of God for hundreds of years before it happened? (Passover) So why do Christians celebrate a holiday known as Easter? In fact, do you even know what the word “Easter” means? Have you ever wondered where the word Easter originated? The truth might just shock you. Many of the old reference books actually contained the truth.

In fact, pagans and Wiccans celebrate a holiday called “Ostara”to this very day.  In fact, “Ostara” was celebrated on March 20th. in 2011. Well what about Easter eggs and Easter bunnies?  Easter “eggs” and Easter bunnies are pagan fertility symbols that celebrate this pagan fertility goddess, and they have been used as symbols for her for thousands of years. The truth is stunning, eh?  You see, “Easter” has nothing to do with Yahshua (Jesus). Yahshua (Jesus) died on the eve of Passover. In fact, the festival of Passover was a stunning prophetic picture of what would happen to the Messiah. In the “Old Testament”, God had His people go up to Jerusalem three times per year. One of those times was for Passover. During the very first Passover, God had the Jews take the blood of a lamb and put it on their doorposts so that the death angel would pass over their houses.

So for centuries upon centuries, God had His people gather in the exact city where Christ would die, at the exact time of the year when He would die, and He had them celebrate a holiday that perfectly foreshadowed the sacrifice of Yahshua (Jesus) the Messiah.

So why have Christians rejected the festival of Passover? After all, it is a fact that Jesus celebrated Passover.  The Last Supper was actually a Passover meal (just look it up in the Scriptures). During the Last Supper Jesus said that from now on we were to celebrate that meal in memory of Him.

But instead of celebrating Passover, most Christians today celebrate “Easter” just as ancient civilizations such as the Assyrians, the Phoenicians, and the Philistines did.  In fact, ritual pagan sex acts were often involved with the celebration of “Easter” in ancient times.  That doesn’t sound like much of a Christian holiday.

So why have Christians forsaken a holiday which predicted the sacrifice of Jesus, which is full of symbolism about Jesus, which is during the precise time when Jesus died and rose again and which God tells us in the Scriptures to remember? Why have Christians instead been celebrating a pagan fertility festival that is named after a pagan fertility goddess and is filled with pagan symbols and traditions?"

How to Celebrate Passover as a Christian

Christianity has roots in Judaism. Many Christians celebrate Jewish holidays regardless of their background.

Read up on the history of Passover. As a Christian, you can actually read about the origins of Passover in the Bible. You can also find information on Passover and Passover traditions on several websites such as: http://en.wikipedia.org/wiki/Passover and http://www.yhwhisel.com/Easter.html

Remember to separate Passover from Good Friday and Easter celebrations. Jewish and Christian traditions are different and must be observed as such. You can obtain better information on how to separate these holidays by speaking to a messianic rabbi.

"Jews for Jesus" Video about The Passover.

Watch a 40 minute video of David Brickner presenting the Passover below:

A preview of a "Christ in the Passover" presentation by "Jews for Jesus" featuring David Brickner.

(A bit of a comedian)

After the Passover comes the Feast of Unleavened bread

Jay and I installed the last two pieces of ceiling in the cargo trailer:

Then we cut the paneling for the rear left and right corners. The idea was to see if there would be enough paneling left over to do inside the cabinet next to the closet in the front.  There wasn't.  So we will have to think about that.

It started out cold, no tank tops and shorts like we had been wearing, but T-shirts, jeans and sweaters, then it turned into another lovely day.

Posted by LakeConroePenny,TX at 2:21 PM