For "Winged Wednesday", here we go:

"Like other pihas, the Chestnut-capped is plain in appearance, but will grab your attention with its loud and piercing calls. This species is further identifiable by its uniform grey color, yellow orbital ring and gape, chestnut crown, and undertail coverts.

First discovered in 2001 by ABC partner Fundación ProAves, the piha was quickly listed as Critically Endangered due to its small population and the threats to its remaining habitat. It also qualifies as an Alliance for Zero Extinction species because its global distribution is limited to a tiny patch of remnant forest in the Central Andes of Colombia.

In 2006, ProAves, with support from ABC, established the Chestnut-capped Piha Reserve to help stabilize and perhaps increase the species' population. In an exciting new development, ProAves is now expanding the reserve from 1,700 acres to 5,300 acres thanks to the timely support of ABC and World Land Trust-US. We will update you when the new acquisitions are completed later this year.

The Chesnut-capped Piha Reserve is ideal for ecotourism, with opportunities to see the piha and many other endemic, endangered species, including the Red-bellied Grackle, Black Tinamou, and Multi-colored Tanager, and migrants such as the Cerulean Warbler. Watch a video of the Chesnut-capped Piha and Reserve.
_________ 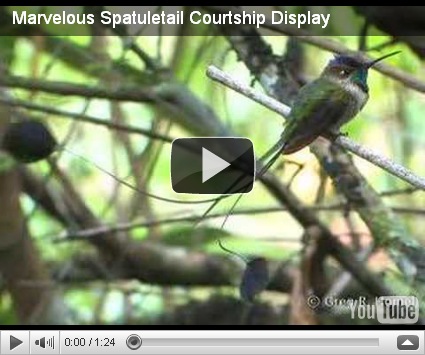 "Bird-smart wind power employs careful siting, operational and construction mitigation, and monitoring, as well as compensation to reduce and redress any unavoidable bird mortality and habitat loss from wind energy development. These are issues that should be included in mandatory federal wind standards.
Dramatic Video Shows Bird Strike at Wind Turbine: One Bird Currently Killed Every Minute by Wind Power in the U.S.

American Bird Conservancy (ABC), the nation's leading bird conservation organization, today distributed dramatic footage showing a wind turbine striking a bird—a poignant illustration of the dangers posed to birds by the burgeoning wind industry. The footage will also appear as part of a wind TV commercial to be run on major networks later this week. The commercial encourages viewers to send a letter to the U.S. Fish and Wildlife Service asking that wind power be made bird-smart.
See:  http://www.abcbirds.org/newsandreports/releases/110405.html for more details." 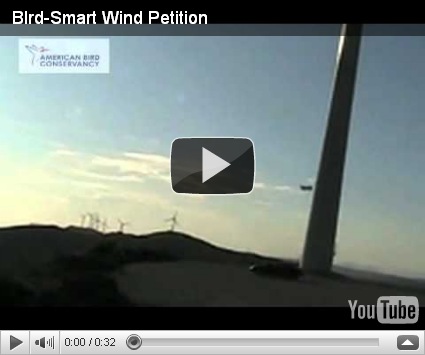 This Bird News Network video by American Bird Conservancy (http://www.abcbirds.org)/ covers the impacts to birds of the Gulf oil spill and problems with the cleanup effort. ABC released a report making recommendations to improve future efforts. 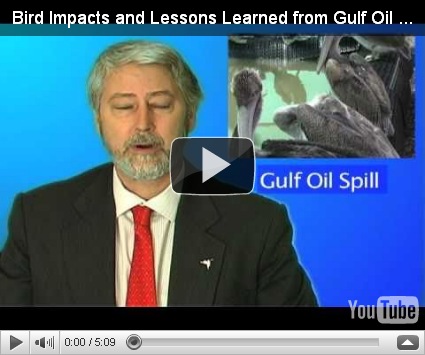 A Post-mortem on the Gulf Oil Spill 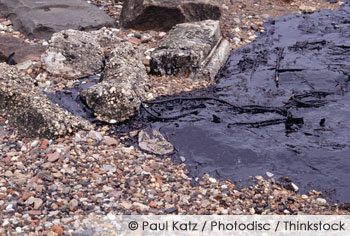 According to a government report, last year’s Deepwater Horizon oil spill killed almost 7,000 animals.
Estimates are the worst man-made disaster in U.S. history dumped from 170 to 210 million gallons* of oil into the Gulf of Mexico.
A few grim statistics:
At the start of this year, there were still over 9,000 clean-up workers in the Gulf, covering nearly 600 miles of oiled shoreline.
According to Admiral Paul Zukunft, the federal coordinator at the spill site, about 9,000 square miles of federal waters are still off-limits to fishing, down from almost 90,000 square miles at the height of the disaster clean-up effort.
* Please note: The 185,000 gallons reported in the dvm360 article is incorrect.

Even though oil is no longer visible on the surface of the water, scientists have located significant amounts on the Gulf floor. And the oil that washed ashore onto wetlands and beaches will have an affect for years to come.

The National Wildlife Federation predicts the following:
Another concern is the discovery of dead coral in an area seven miles from the Deepwater Horizon well, at a depth of 4,500 feet, among large plumes of dispersed oil drifting through the ocean.
According to the New York Times: 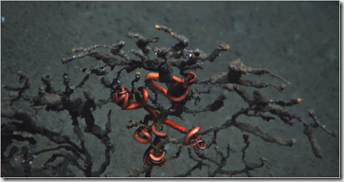 The discovery of the dead corals offers the strongest evidence so far that oil from the BP well may have harmed marine life in the deep ocean, a concern raised by many biologists soon after the April 20 blowout that caused the spill. At an estimated nearly five million barrels, it was the largest offshore oil spill in the nation’s history."

Today:
Ray is going to do some more painting in the cargo trailer, and I am going into the next town, as it is shopping day.
Posted by LakeConroePenny,TX at 6:47 AM

I feel bad about all the birds who fly into wind turbines, but I feel worse about all the birds who die because of oil spills and pollution. I think it's a matter of adaptation and evolution. The birds who evolve to be able to avoid perils such as wind turbines will survive, because we sure aren't going to give up our lifestyle for no energy at all, and whatever we do to get it wreaks havoc - oil, coal, wind, and probably solar. Even hydroelectric probably causes grief to the fish.

Just cureous, do you live on the lake? (your name Lake Conroe Penny) I suppose that Willis or New Waverly would be your closest town and therefore, Conroe would be your "next" town.

Thank you for your comments, Gypsy and Dizzy-Dick.

Gypsy, The ABC now had guidelines for wind farms and the migratory paths:

“Billions of birds migrate annually, taking advantage of the same wind currents that are most beneficial for producing wind energy. We know that in some locations a small percentage of wind turbines may cause the majority of bird and bat deaths. For example, Altamont Pass, east of Oakland, California, is an extreme case: in an area used regularly by migrant and resident raptors, only a fraction of the 5,000 turbines are responsible for most of the raptor deaths annually. As wind power develops further, we need to know more about how placement, design, and operation impact birds and bats as well as how habitat and weather conditions affect potential hazards.” From:
http://www.abcbirds.org/newsandreports/releases/090723.html

Dizzy-Dick: Yes, I am north of Willis on Lake Conroe, so Conroe is the 'big city'. Houston is the 'humongous city!
Happy Tails and Trails to you both. Penny.