Do You Want BPA With That? Cancer. April's Fools. Cargo Trailer. Kittens.

"Plastics. They seem so...inert. Slow to erode or decay, with a biodegradation time measured in the hundreds of years, plastics appear cut off from the organic environment in the way that no other product is, safe and secure and sterile. Yet scientists have begun to learn that plastics are anything but impermeable.

Plastic containers and linings — especially those used in food containers that might end up being heated or washed — often leach chemicals into the surrounding environment. And some of those chemicals like bisphenol-A (BPA) and phthalates may do strange things to the body, mimicking and disrupting hormones in ways that haven't yet been fully understood.

While the science over such "endocrine-disrupting" chemicals is still far from certain, enough researchers have raised worries that some parents have begun avoiding some plastics in an effort to shield children from toxins.
(Pregnant women and infant children seem especially vulnerable to endocrine-disrupting chemicals.) Manufacturers have even begun advertising some products as "BPA-free."

(More on Time.com: Pregnant Women Awash in Chemicals. Is That Bad for Baby?)

"Beijing might have the right idea, because it may turn out that endocrine-disrupting chemicals like BPA are even more common than we imagined. In a new study for the journal Environmental Health Perspectives, researchers found that most plastic products leach endocrine-disrupting chemicals — and that was true even for products labeled "BPA-free." Scientists led by George Bittner, a neurobiologist at the University of Texas, looked at 455 common plastic products and found that 70% tested positive for estrogenic activity. Once those products were subject to real-world conditions — microwaving or dishwashing — that proportion rose to 95%. As the study concluded:


Almost all commercially available plastic products we sampled, independent of the type of resin, product, or retail source, leached chemicals having reliably-detectable EA, including those advertised as BPA-free. In some cases, BPA-free products released chemicals having more EA [endocrine activity] than BPA-containing products."

Jill Greenberg for TIME
The list of potential threats is exhaustive and, frankly, unavoidable: bisphenol A (BPA) and phthalates found in plastic, pesticides, exhaust from traffic, pharmaceuticals in the water supply, industrial chemicals and radiation from medical tests, cell phones and the sun.
The authors of the report urge the government to increase research and regulation of these carcinogens, which pose "grievous harm," especially to children, and give specific advice to consumers for avoiding them.
More than 80,000 chemicals are on the U.S. market, of which only a few hundred have been proved safe, the authors note.

"BPA or Bisphenol A is a estrogenic plastic by-product used in the manufacture of polycarbonate plastics. It can leach into food or drinks from the plastic containers holding them. Canada in September 2010 declared BPA as a toxic substance, but to date no other country has followed suit, although BPA has been banned in baby bottles in Europe and the US (although they may still be sold in EU countries until June 2011).
BPA has been linked to estrogen mimicking compounds since the 1930s and has been widely reported in the media as being a suspected disruptor of your body's hormones. BPA's proponents argue that the substance does not accumulate in your body and therefore is not harmful, even though BPA has been found in 98 percent of all people tested in the US and is commonly found in the umbilical cords of babies in utero."


In the event that you do opt to use plastic containers for your food, be sure to avoid those marked on the bottom with the recycling label No. 7, or the letters PC, as these varieties are most likely to contain BPA."

The suspected health hazards of BPA are many, listed at: http://articles.mercola.com/sites/articles/archive/2011/03/25/even-bpafree-plastics-leach-endrocrinedisrupting-chemicals.aspx
__________________

A no-joke April Fools' snowstorm descended upon parts of the Northeast early Friday, a cruel prank on a region that was finally enjoying a reprieve from its long, white winter. 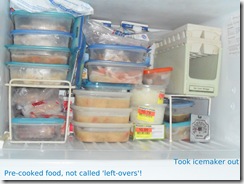 I looked around my kitchen and there is some sort of plastic everywhere.
When I cook, I make enough for more than one meal, and store it in flat plastic containers in the freezers.  I just don't know how I could substitute them for non-plastic unless I bought a bunch of Pyrex, or ceramic containers with lids, even then they would have to be wrapped in *GASP* plastic wrap to keep them air-free.
What did our grandmothers do to save left-overs pre-cooked meals?
------------------

Ray painted the first panel for the cargo trailer's ceiling, and wood puttied the kitchen cabinets for painting the same color as the ceiling. It is easier to paint them before they are installed on the ceiling. 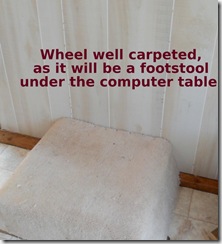 Jay and I dismantled the right side dinette booth base, and applied some carpet padding and a carpet scrap over what will now be a foot stool at the desk/table.

I keep all sorts of odd parts and scraps in the store room attic.  We never know what we will need.  I can't remember what day it is, but I know everything that I have stored up there, and it is all sorted out into 'departments'!  Very rarely do we have to buy anything.
-----------------

The bottle fed kittens are doing well, and they were de-wormed with Strongid-T this morning.  It is safe to use on even 2 week old pet babies.
As their little teeth are coming in, I figure them to be 3-4 weeks old.
They are even starting to use their little litter box.  My SPCA boss said to keep them on kitten milk for another 2-3 weeks.  Little kitty-cat tummies can't digest canned food like puppies of that age.

Our weather is still great, but we could use some of that rain that other parts of the country have had.
Maybe you could send us some today?
Posted by LakeConroePenny,TX at 2:19 PM