It's "Winged Wednesday" again, where does time fly?

Ute Mountain -- which boasts an elevation of over 10,000 feet – and the Rio Grande Gorge -- known as one of the world’s great avian migratory routes -- are considered two “landmarks” in Northern New Mexico. They help define Northern New Mexico as a wildlife haven, particularly for birds. Bird watchers come from all over the country and beyond to enjoy everything from hummingbirds to herons as the area is a major migration route for many species.
These unrivaled natural treasures, and the communities they sustain, are why members of New Mexico’s congressional delegation, led by U.S. Sen. Jeff Bingaman, re-introduced legislation to protect these iconic lands and waters.

The legislation would protect over 21,000 acres of Wilderness within a 236,980 acre National Conservation Area. It would ensure protection of some of the most ecologically significant lands in the state of New Mexico and help secure traditional ways of life in Northern New Mexico for local residents as well as hunters, ranchers, and outfitters.

The Act would protect the upper reaches of the Rio Grande Gorge, where eagles, falcons and hawks nest on the walls of the gorge and numerous species -- including majestic sandhill cranes -- migrate through the area.
Wilderness protection assures the ecological future of these incredible birds, as well as important game species like pronghorn, bighorn sheep and elk.
The legislation would also safeguard world-class recreation opportunities, such as hiking, hunting and fishing. Grazing and vehicle and utility access would continue in already-existing areas, and water rights would not be affected."
More at: http://wilderness.org/content/rio-grande-gorge-legislation-re-introduced
______________________

"This tiny plover is the color of pale sand – the perfect camouflage for its preferred habit of open beaches, alkali and salt flats, and river sandbars.
Although the Snowy Plover has a large population and wide range, its numbers appear to be decreasing. Major threats include habitat degradation/loss and increased recreational use of beaches, where human activity can destroy the birds’ nests and eggs. Free-roaming cats also pose a threat.

Sea level rise due to climate change will cause additional loss of habitat for the Snowy Plover and other beach-nesting birds. Increased storm surges may also threaten nests.
As a result of continuing declines and ongoing threats, the U.S. Fish and Wildlife Service recently issued a proposal to more than double the bird's designated Critical Habitat. See the full story here."
From: http://www.abcbirds.org/newsandreports/botw/index.html

Birds have to fly though this, too:

"The Four Corners Power Plant is one of the largest polluters of nitrogen oxides in the nation. For years, its excessive emissions have made it harder to breathe clean air and see the majestic views of the Grand Canyon, Mesa Verde, and 14 other beloved national parks and wilderness areas in the region.

The time for Four Corners to clean up its act is now.
The U.S. Environmental Protection Agency (EPA) is finally addressing the massive pollution from Four Corners--but they're in danger of stopping short of the finish line. Write to Environmental Scientist Anita Lee and let her know that you want to see EPA finish the job by requiring lower pollution limits at the Four Corners Power Plant. Learn more."

"This video documents visual and personal experiences of haze pollution in some of the Southwest's most beloved national parks as told through the perspective of those living and working in the Four Corners region." 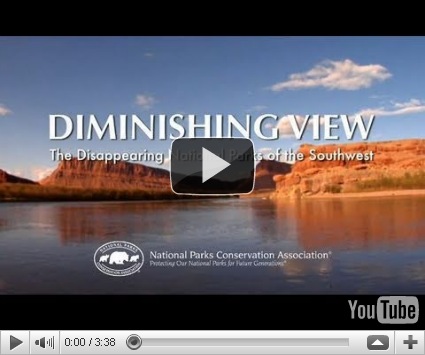 "The U.S. Environmental Protection Agency (EPA) has proposed a good plan for Four Corners to clean up its act--but they're not going far enough. After years of impacts to the people, ecosystems, and national parks of the Southwest, the EPA should require this mega-polluter to comply with the law, ensuring clear views and healthy air for us all and strengthening local economies that benefit from millions of national park visitors.

Take Action: Tell the EPA to hold Four Corners fully accountable for its pollution. If you want to protect the views at Grand Canyon, Mesa Verde, and eight other national parks, please ask the EPA to require lower emission limits that reflect what the proposed pollution controls are easily capable of achieving."
More at: https://secure.npca.org/site/Advocacy?pagename=homepage&page=UserAction&id=523&autologin=true&AddInterest=1084
___________________

Our shopping day in the next town was moved from Wednesday to Tuesday this week.

Jay and I went straight to the Assistance League Thrift Shop, as the last week of the month is when they have their "50% off tag days".  This month it was the blue tags.  It's their way of rotating their stock, and it works, as there were plenty of people buying up all the blue tagged stock.  Everything in there is nice, clean smelling, and has been tested.  Jay has been waiting for this, as there was an abs exerciser that he has been keeping his eye on.  It was still there, so he bought it.

When the power went out the other night, my coffee maker had a hissy fit the next morning.  I had to re-set the time on it, to make it work, but it just wouldn't let the coffee through, except at an occasional drip.  It did this once before, even though it is cleaned with vinegar monthly.

So while I was at the Assistance League sale, I bought another coffee maker for $1.75, and a signed Trifari vintage gold and seed pearl braided necklace.

I am not into costume jewelry, as we used to have a real jewelry store in Dallas, but I am used to wearing a thick gold chain, and I had worn the links out on mine.   All the real jewelry I had amassed, I gave to my daughter and granddaughters, except for my gold necklace, pearls, wedding and engagement ring.  At my age, I just don't want to fool with worry about it.  So this will be handy for some everyday occasions when I don't wear my pearls.

I got carried away at Petco when I bought 20 cans and 7 bags of kitten, cat, and dog food that was on sale half-price.  All very good brands with no grains, cornmeal or by-products.  My dogs aren't picky, but we'll see which ones the kittens and Prime will eat.  The kittens are not picky about their canned food, but Prime is.  Bobcat has to have her Wellness (no grains) cans, but doesn't like turkey!  Even though it was on sale, Petco said I could return them with my receipt.  None of my cats will eat Wellness dry food, or that choice would be easy.  What we do to please our furkids!

Bobcat also has some new cat treats containing Glucosamine and Chrondoitin for her bad arthritic shoulder.  I had wanted to get her off Royal Canin 28 dry cat food which has Glucosamine & Chrondoitin in it, as it also contain grains, and she shouldn't have them.  She only eats about 1/4 cup a day, but at 15 years old, I want her to eat the best. So I bought her some better food, which happened to be cheaper, and now I will have control over how much Glucosamine & Chrondoitin she gets.  She will feel better without any grains.  Unfortunately, she isn't crazy about the new food, and picks out the Royal Canin!

After yesterday's rain, I looked for any leaks in the cargo trailer, and there were none.

Ray got up on the roof of the cargo trailer and he installed a Maxx-Air over the front roof vent.  Now we can keep the trailer aired out.  I had picked up two new Maxx-Airs, with the nuts and bolts, at a yard sale for $3 a piece, they didn't know what they had!   I gave one to my brother Nigel, to put on his truck camper before they left for Alaska last year.  Then Ray went around the second roof vent with Dicor.

Jay and I were climbing the ladder and handing him stuff as he needed it, but we were also measuring and cutting sticks, boards and rails to make two big shelves at the top of the shelf-drawer cabinet next to the front door.

So that it would be ready to paint tomorrow, Ray primed as much as he could today.
Posted by LakeConroePenny,TX at 2:25 PM