Some of this week's News: 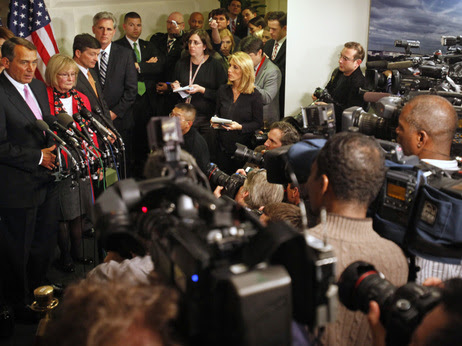 
"Reports of the death of compromise in Washington are greatly exaggerated.
That's one important message from the 11th-hour agreement that averted a partial shutdown of the federal government Friday night."

"The deal averted the furlough of 800,000 federal employees, including what would have been the delay of pay to U.S. armed service personnel even as officials such as Obama, Boehner and Reid continued to receive their salaries. A shutdown also would have closed federal facilities such as National Parks and the Smithsonian Institution in Washington, delayed processing of tax returns and frozen the release of some economic data. "

"The accomplishment set the stage for even tougher confrontations. Republicans intend to pass a 2012 budget through the House next week that calls for sweeping changes in Medicare and Medicaid and would cut domestic programs deeply in an attempt to gain control over soaring deficits."
_____________________

Dog Rescued After 3 Weeks at Sea.
"A dog which was rescued at sea off the coast of Kesennuma, Japan, on Friday April 1st, after being found drifting on a roof is believed to have survived for three weeks after being washed away by the killer tsunami triggered by the March 11 earthquake. Coast guard members aboard a helicopter involved in the day's search for those still missing after the disaster found the dog on the roof drifting along some 1.8 kilometres off Kesennuma, Miyagi Prefecture. It took several hours to catch the dog and bring him to the safety of a coastguard vessel. The dog's collar has no clues about the owner such as address and contact numbers." 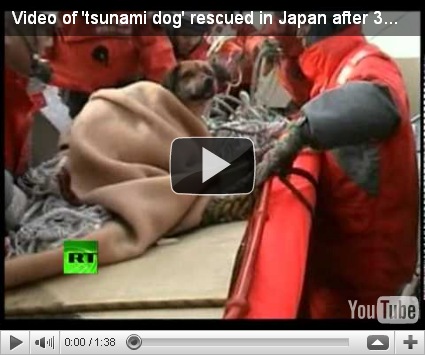 "Godaddy.com CEO Bob Parsons has convinced himself that he’s a humanitarian. I think he’s got a long way to go before he lives up to that self-billing. He’s in the news today because he traveled to Zimbabwe recently to shoot an elephant for a trophy and then released a video in which he is happily grinning over his conquest. Now the man known for racy Super Bowl ads is spinning his version of the event and trying to morph this selfish act of slaughter into some selfless act of charity.

He shot the elephant at night, and claims it was a “problem elephant.”  It happened to be a bull elephant with sizeable tusks, just the type that trophy hunters like to kill.
He seems to be a rather obsessive trophy hunter; one other self-produced video on the web shows him wounding and later killing a leopard, and the current edition of Safari Club International's magazine shows an array of animal heads mounted on his wall as trophies." 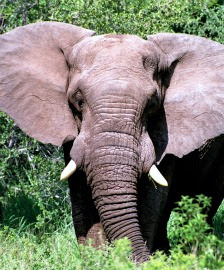 Picture of African elephants in Zimbabwe that are threatened
with extinction.

"If he wants to help the people of Africa, I suggest he spend a day with Oprah Winfrey or Bill Gates and learn how real charitable work on the continent is done. They’ve invested of their time and considerable wealth to promote education, housing, nutrition, and public health. And last time I checked, they didn’t leave a trail of animal victims they’ve personally slain at the end of their visit.

If he wants to help people keep elephants out of crop fields, he should fund the building of solar-powered fences like those successfully used for this purpose in neighboring South Africa. My guess is Mr. Parsons went to Africa to shoot an elephant, and perhaps some other creatures, and then tried to find some high-sounding rationale for his gambit.

I’ve heard this kind of excuse-making from trophy hunters before. In fact, in my book, The Bond, released on April 5, I recount the rhetorical gymnastics and whitewashing of a killing spree also in southern Africa by trophy hunter Ken Behring, who shot several endangered elephants in one of his safaris. Like Parsons, he claimed he did the killing for the good of the community, identifying the animals as "problem elephants."
It turns out that wildlife authorities in Mozambique had a different take on the matter, and they wanted Ken Behring to leave their country without delay.

HSUS has about 650 domain names with Godaddy.com. I’ve instructed our staff to find another host for them. We don’t like doing business with a company with a leader like Parsons. I hope you’ll think about following suit. No one needs to kill elephants either to show his manhood or to do humanitarian work"."
From: http://hsus.typepad.com/wayne/2011/04/godaddy-elephant.html
_________________

I hope you didn't miss them, they are such graceful animals. 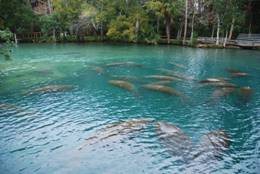 RVing in Florida now? It's a great time to see manatees

"Winter in Florida is the perfect time for warm-weather RV enthusiasts to see manatees. When the water temperatures drop below 68 degrees, manatees, which are mammals, seek warmer waters. Fresh water springs are a constant 72 degrees, making the springs a good place to spot the gentle giants. On sunny days, manatees will travel between the spring bowls and the rivers, depending upon water temperatures.
Many Florida state parks feature fresh water springs. In early December, the gates were opened at Ellie Schiller Homosassa Springs Wildlife State Park, allowing wild manatees to enter the spring bowl for the first time in 30 years. 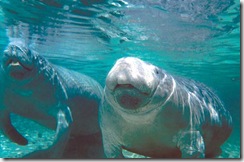 The park showcases a variety of native Florida wildlife, including manatees, black bears, bobcats, white-tailed deer, American alligators, American crocodiles, and river otters. Manatee programs are offered three times daily. At the Wildlife Encounter programs, snakes and other native animals are featured.
A Manatee Festival will be held at Blue Spring State Park in Orange City on January 22 and 23 from 10 a.m. to 5 p.m. As a Manatee Refuge, this park serves as the winter home for manatees from mid-November through March, depending upon the water temperatures in the St. Johns River. The event will feature arts and crafts and more."
_________________ 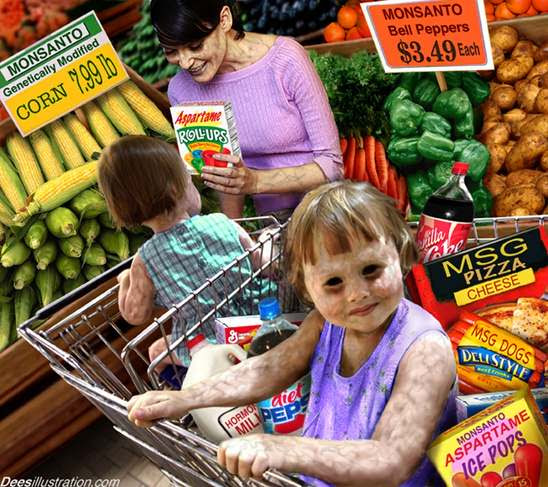 “This case asks whether Monsanto has the right to sue organic farmers for patent infringement if Monsanto’s transgenic seed should land on their property,” said Dan Ravicher, PUBPAT’s Executive Director and Lecturer of Law at Benjamin N. Cardozo School of Law in New York. “It seems quite perverse that an organic farmer contaminated by transgenic seed could be accused of patent infringement, but Monsanto has made such accusations before and is notorious for having sued hundreds of farmers for patent infringement, so we had to act to protect the interests of our clients.”

“Some say transgenic seed can coexist with organic seed, but history tells us that’s not possible, and it’s actually in Monsanto’s financial interest to eliminate organic seed so that they can have a total monopoly over our food supply,” said Ravicher. “Monsanto is the same chemical company that previously brought us Agent Orange, DDT, PCB’s and other toxins, which they said were safe, but we know are not. Now Monsanto says transgenic seed is safe, but evidence clearly shows it is not.” 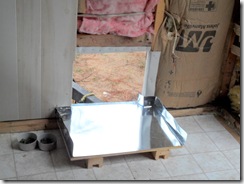 Ray is helping Shay with her job today, she is out of the hospital, but still has to see a cardiologist again.

Jay and I worked on the closet with the AC underneath it.  As this cargo trailer is really supposed to be a "Stealth" trailer, the AC is built-in where it can't be seen from the outside.  We had made the sloped metal drip pan for it ages ago.

("For some the word "Stealth" seems to be a key point in their decision. Being able to spend the night camping for free...Lets take a closer look at the word "Stealth".  Being stealthy indicates you're trying to appear as something other than what you are. That you are intentionally hiding the fact that you're sleeping in your vehicle. Be it a van, car, or retired bread truck, your hope is that it is accepted as part of the neighborhood without question.")

We made the removable metal lined shelf that goes over the AC, and it fits really tight.  There is plenty of room on the top and sides for the AC to "breathe",  and it vents to the outside.  I already have the grill that goes on the outside.  The rail across the top of it can be unscrewed, in case the AC has to be removed.

We cut up an old closet door that was in the trailer when I bought it, for the shelf .  The rest of the door will be used for the shelves in the next cupboard..  We are gradually using up every piece of lumber that was taken out of the trailer.

It was time consuming to cut, level, and screw in all the sturdy supports for the shelf, and then cutting the shelf's corners to fit at the back, so we had had enough for today.

Posted by LakeConroePenny,TX at 1:51 PM