Palo Duro Canyon,TX, "The Other Grand Canyon". A Little Rain Did Fall.

For "Travel Tuesday" let's stay right here in my adopted State of Texas. 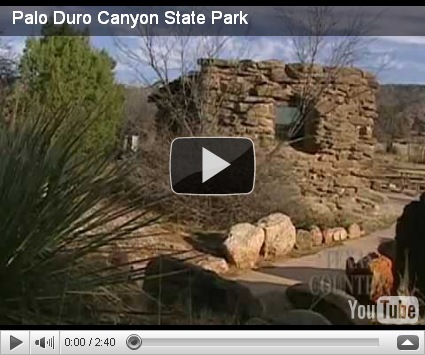 It has a long way to go to catch up with Grand Canyon, but it is certainly making some headway. It was named Palo Duro meaning "hard wood", because the early Spanish settlers noticed the abundance of mesquite and juniper trees in the area. It is truly a beautiful spot with colorful linear lines passing over the land, while being outlined by the trees of many years ago. Any geologist or enthusiast will find a home here." 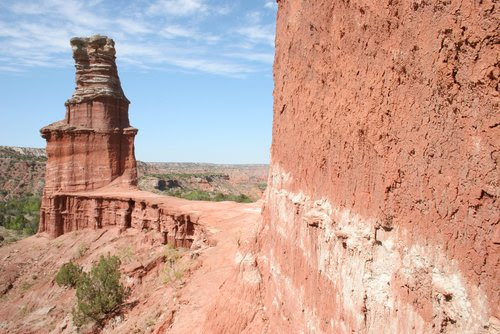 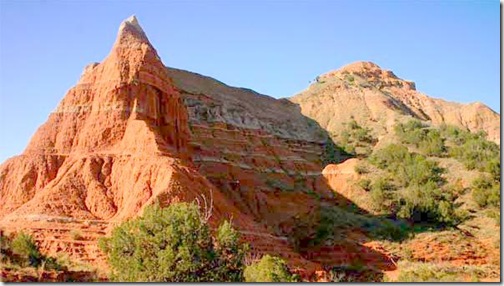 "Two of the more distinctive features in Palo Duro Canyon are Capitol Peak and Lighthouse Peak . Lighthouse Peak can only be reached by a hiking trail if your desire is to see this very remarkable formation close-up." I think Jo and Fred Wishnie describe their feelings about it so well:  http://www.mytripjournal.com/travel-549471
"We finally made it back to Palo Duro Canyon, a place I have loved ever since we stayed here our first year out.

We often have conversations with people we meet, who after learning we live in our RV and have been to 47 of the "lower 48" states plus Alaska, will ask "So what's been your favorite place?"
We pretty much answer in unison, Alaska! It would be hard not to have that be the answer, as anyone who has ever been there will know.    Sure, Yellowstone National Park and Yosemite N.P. come right after that.

But pretty shortly the next place that comes to mind is Palo Duro Canyon. It is one of those special places that is hard to describe. Magical is the word that comes to mind. We spent our first Thanksgiving on the road here in November 2006. I wondered how it would feel the second time. 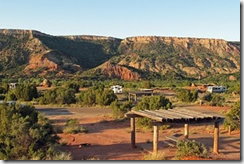 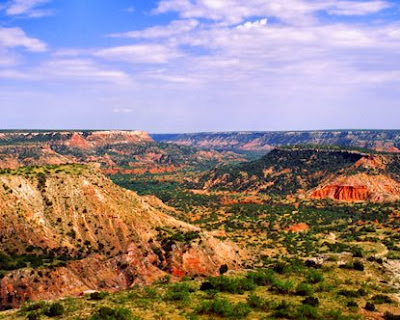 History of the Area:
"Man has inhabited Palo Duro Canyon for approximately 12,000 years. The Clovis and Folsom people first resided in the canyon and hunted large herds of mammoth and giant bison. Later on, other cultures such as the Apaches, Comanches, and Kiowas utilized the canyon's abundant resources.

Early Spanish Explorers are believed to have discovered the area and dubbed the canyon "Palo Duro" which is Spanish for "hard wood" in reference to the abundant mesquite and juniper trees. However, an American did not officially discover the canyon until 1852 when Captain Marcy ventured into the area while searching for the headwaters of the Red River.

In 1874, Palo Duro Canyon was a battle site during the Red River Wars. Col. Mackenzie, under orders from the US Government, apprehended the Native Americans residing in the canyon by first capturing 1,400 horses and then later destroying the majority of the herd. Unable to escape, the Native Americans surrendered and were transported to reservations in Oklahoma. Then, from 1876 until 1890, most of the canyon belonged to the J.A. Ranch and was operated by Col. Charles Goodnight.

On September 28, 1874, Col. Ranald S. Mackenzie at the head of the Fourth U.S. Cavalry attacked and destroyed a large Indian encampment in Palo Duro Canyon. Mackenzie’s troopers formed part of the Red River Campaign of 1874 - 75, which saw no less than six military columns placed in the field (in a bid) to force Kiowas, Cheyennes, and Comanches to return to the reservations. On the 28th, Mackenzie’s scouts followed the Indian trail to the edge of Palo Duro Canyon. The soldiers descended the steep slopes to the valley floor 700 feet below.

Taken by surprise, the Indians abandoned their villages, allowing Mackenzie to capture more than 1,100 horses that were later slaughtered to prevent recapture. Although few Indians or soldiers were killed, the unrelenting pursuit of the troopers and the cold weather ultimately forced the Indians to surrender, thus bringing to a close the Red River War. Part of the battlefield is located within Palo Duro Canyon State Park.

"This was almost a bloodless battle except for the carnage of the horses. Only 4 Indians were killed and no cavalry soldiers died. But left without their horses, camp and supplies, the Indians finally gave up and went back to their reservations at Fort Reno and Fort Sill. So the battle was successful from the viewpoint of the U.S. government.

"Not our proudest moment in terms of how the Native Indians were treated in this author's opinion."

While in the park, stop by and enjoy our Visitor Center located on the Canyon Rim. This rustic native stone building was constructed by the CCC in 1934 and houses a Museum and Museum Store. The store is located in the Visitor Center and features books, pottery, jewelry, and educational items pertaining to the Canyon."
More about Palo Duro at: http://www.tpwd.state.tx.us/spdest/findadest/parks/palo_duro/
and   http://www.destination360.com/north-america/us/texas/palo-duro-canyon-state-park
________________

There is a musical production that is performed every evening during the summer.  The musical is part Texas history and the 5 Diamonds Ranch history.    The musical is performed in the park in a special outdoor amphitheater.  The backdrop for the stage is the Palo Duro Canyon walls itself.  True Texans will find the musical more moving than a trip to the Alamo in San Antonio.
See the Intro Video

A LONE HORSEMAN, carrying the flag of the great state of Texas appears atop a 600 foot cliff, signaling the beginning of the most spectacular outdoor musical drama in the world. With a burst of fireworks and a moving swell of the music, the horseman gallops away. Suddenly, a cast of more than 60 actors, singers and dancers takes the stage to kick off the show that millions of fans from all around the world have come to see.

Only a state as big as Texas could host a show as big as TEXAS!
THE BEAUTIFUL PIONEER AMPHITHEATRE, carved out of and nestled into a natural basin in the majestic Palo Duro Canyon-the nation’s second largest canyon-comes alive once again with the Official Play of the State of Texas. http://hubpages.com/hub/State-Park-in-Texas-Palo-Duro-Canyon-Dramatic-Attraction

The 43rd anniversary season will run Tuesday through Sunday from June 4 to August 20, 2011.

Palo Duro Canyon is over 600 miles from me, so it isn't somewhere that I can just drive over to see!

I could see flashes of lightening in the distance when I took the dogs out for their 'last call', last night, then power went out about 1.00AM.  That woke me up, as I am not used to sleeping in total quiet and dark.

I could hear thunder, and we got a few drops of rain.  When the power was restored, for some reason, my computer, which was off at the time, came on.  So I was going to turn it off, but got sidetracked looking at some emails.  The rain had quit, but a little while later the power went off again, and I saw some emergency vehicles going down the road.  So someone was getting some bad weather down the line.

I thought I had better get this published now, as there is no knowing what will be happen later today.

Posted by LakeConroePenny,TX at 3:17 AM

It just rained enough here to dampen the very top layer of dust.

I loved Palo Duro Canyon. I even liked it better than the Grand Canyon but when we were at the Grand Canyon it was cold. We had driven there from the Sedona area as it was too cold to stay in the RV there. Gordon hiked to the Lighthouse in Palo Duro but I wimped out. I sure do love those red rocks!

I have already put Palo Duro Canyon on our bucket list. We usually visit the lower parts of Texas, but this will make a great place to stop on our way south next year. Great pictures and video today. I love Texas.... :)