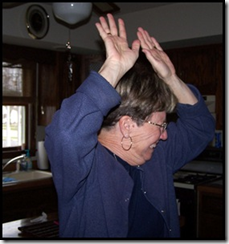 "Any of you out there that have owned a camper/RV/motorhome know that one of the most dreaded jobs  for any two people is …BACKING INTO THE PARKING SPOT.
This almost always means that the “co-pilot” gets to jump out and assume the position at the back of the camper, putting your reputation on the line!  This also usually always means that many expletives will be  mumbled during the process…and sometimes certain hand signals are required":
See them at: http://dennisdonna.blogspot.com/2011/04/donnas-semi-helpful-semaphore-signals.html
______________________

"Truckers seem almost paranoid about the State Police and Highway Patrol and are constantly updating one another about their location. I love the way they differentiate between the various types of "bears".

A "full-grown"Bear is a State Police officer or Highway Patrolman. Since one of their primary duties is to police the highways, truckers are particularly interested in the whereabouts of bears.

A "County Mountie" is a local Deputy Sheriff. They may or may not be interested in truckers and seem to command a little less respect than the "full-growns."

A "Local Yocal" is a city police officer. A local yocal is rarely interested in enforcing traffic laws on interstate highways but truckers keep a wary eye on them anyway.

A "plain-wrapper" is an unmarked patrol car. "Polar bear" refers to a white patrol car.

A "bear in the air" is a police helicopter or airplane.

And, my favorite, a "Kojac with a Kodak" refers to a police officer using a radar gun.

When a police officer has a vehicle pulled over to the side of the road he has "captured" that driver. A lot of "capturing" activity will bring out the expression "there's bears everywhere" or "they got us surrounded"

Truckers apply their own descriptions to the vehicles sharing the road with them.

A "four-wheeler" is a car (seemingly a constant source of annoyance to truckers); "stagecoach" is a bus; "bread truck" is a motorhome, and "draggin wagon" a tow-truck.

And, they have names for their own as well. A "covered wagon" is a flatbed or open trailer with a tarp cover. A "parking lot" is a car transporter. And we have heard truckers refer to their sleeper as a "condo".

They call weigh stations "chicken coops" (a closed coop is cause for celebration). So now you know where the "Chicken Inspector" works.

You've seen those strips of tire tread lying on the road. Truckers call them "alligators".
If your wheel rolls over an alligator, it has a tendency to jump up and attack your vehicle. The highway department trucks that remove these road hazards are known as "alligator catchers"
When a trucker warns of a "brake check", he's talking about an unexpected slowdown in traffic (brakelights everywhere). Get ready to slow down or stop.

The "hammer lane" is the far left fast lane. That's where you can put your "hammer" or accelerator down (providing that Smokey isn't around).

If someone (or something ) is "in the bushes" they're off the side of the road and pretty much out of sight until you get close to them. Bears like to hide in the bushes.

"Yard line" or "yard stick" refers to the mile markers at the side of the road. If something is located at the "20 yard line" it is near the 20 mile marker.

There are a few more terms that I won't mention here. This is a family website, after all. But if you turn on your CB radio and listen to the trucker talk you can hear and figure them out yourself.
So, the next time you hear a trucker call out, "northbound, you've got an alligator in the hammer lane", you'll be able to take evasive action.

RVing Tips
Get in the habit of doing basic safety checks before you start your travel day.

Roadside fruit stands are a good place for RVers to stop and take a break. As a bonus, you can usually get fresh, local produce for a healthy snack or later meals.

You can improve your gas mileage if you don't fight the wind. You can sometimes do this by driving early in the morning and later in the evening, instead of during mid-day. 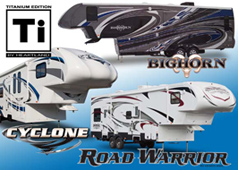 "Heartland Recreational Vehicles, LLC has revived the exclusive Titanium cab-over front cap fashioned by defunct Canadian builder Glendale International Corp., incorporating the distinctive, aerodynamic design into three of its top-selling fifth-wheel lines.
Heartland reported that it had acquired the Titanium’s intellectual property from Glendale last summer, including patents, trademarks and industrial design rights. Oakville, Ont.- based Glendale, which filed for bankruptcy in January of 2010, dominated the Canadian fifth-wheel marketplace with its Titanium lineup.

“We acquired all the patents, so we will be the only company offering this highly innovative design,” said Coley Brady, vice president of sales for Heartland. “Everyone familiar with the industry – trade and consumer – recognizes the Titanium cab-over cap as one of those engineering advances that really impacts the market. We will be offering the Titanium front cap in our luxury Bighorn fifth-wheel brand along with the Road Warrior and Cyclone toy hauler lines.

“Essentially, a 32-foot trailer offers the same living area as a 37-footer because the nose of the trailer can accommodate a bedroom and wardrobe,” Brady said. “And because there is approximately 15 percent less trailer to tow, it significantly cuts down on sway while improving gas mileage for the tow vehicle.”
More at: http://fifthwheeling.rvtravel.com/2011/01/heartland-offers-titanium-technology-on.html
________________ 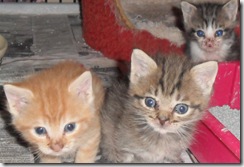 The kittens are growing, and have just been trying to eat out of a saucer, so that's why they have food on their faces.

No work on the cargo trailer, as Ray is doing a job for Shay, and Jay went to the Medical Center with his mother today.
Posted by LakeConroePenny,TX at 11:11 AM