William and Kate. Checkers and Max. How to Stop a Dog from Jumping, To Stay, Leadership. Save Lennox.

Twice in 12 hours, I was brought to tears. 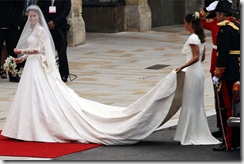 I didn't think the Royal Wedding of the Duke and Duchess of Cambridge would affect me that way, as I have seen plenty of them, all the way back to the then, Princess Elizabeth and Prince Phillip's wedding in November 20, 1947.

I hadn't made any plans to watch it, but I am glad I did.  The pageantry was spectacular, and Duchess Katherine seemed very at ease with it all.


What a lovely couple.  I, together with many millions, I wish them every happiness.


The only member of the Royal Family that I have seen live, and in person, was the late Queen Mary, and I thought she was the most elegant person I had ever seen. 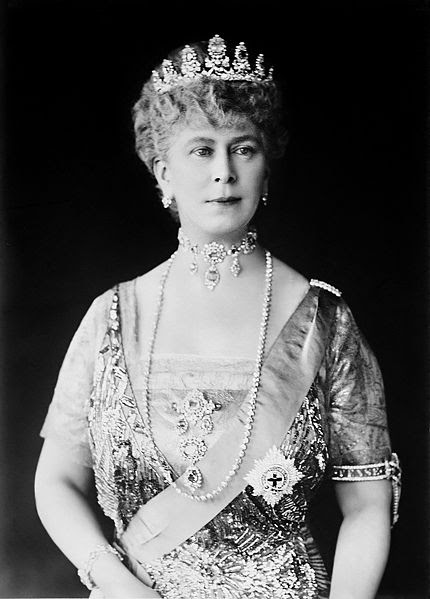 
Mary of Teck - Queen Mary - May of Teck

"May of Teck (Mary Augusta Louise Olga Pauline Claudine Agnes), daughter of Francis, Duke of Teck, she was engaged to marry the heir to the British throne, Edward, and then married his brother when Edward died. As Queen Consort to George V of Great Britain, she was the mother of Edward VIII and George VI. She was popular and known for her intelligence.
Queen Victoria Mary, a daughter of the late Duke of Teck and a great-grand-daughter of King George III, married George, Duke of York on July 6th, 1893, and when he succeeded to the throne, was crowned with him in Westminster Abbey, June 22nd, 1911. Both as Princess of Wales and as Queen, Her Majesty took a constant part in public life. Her work on behalf of women and children has been notable; the higher education of women, and the improvement of conditions in the nursing profession owe much to her practical sympathy. Queen Mary is keenly interested in the arts, and her good taste has transformed several of the royal residences."
http://en.wikipedia.org/wiki/Mary_of_Teck  and: http://www.imdb.com/name/nm0703073/bio

Last night, I absolutely went into shock when I read that the second of Al's Bayfield Bunch had died within a week.
I just started blurting out "Oh, No! Oh, No! Oh, No!" and burst into tears.    I know how it was when I lost my little best friend.
How hard it must be for Kelly, Al, and little Cora.

"MAX: Rest In Peace our Dear Number 1 Boy: 1998 - April 27th 2011"
"Our dearly beloved number one boy Max died peacefully this morning at 11:25.  He quietly slipped away in our arms at the same Veterinary Clinic in Zurich Ontario where Checkers passed on just one week ago to the day.
Our love & attention is now solely focused on our dear little Cora who many know as,  Motormouse."
Once we were five & now we are three......."
http://thebayfieldbunch.com/2011/04/today-we-lost-another-beloved-member-of.html
Please keep the Bayfield Bunch in your thoughts, they are going through a terrible time.
_________________

Forced relaxation
"It struck me because that is exactly what we need to do when we are dealing with a young dog that likes to jump and become unruly. We need to force them to relax.

With all your weight on the leash you force your dog to relax before your friend approaches and gives your dog any attention. Your dog only gets your friend’s attention when she or he relaxes.

If your dog is too strong for you, find a place in your house where you can secure the leash to something sturdy. This way your dog is out of the area where he can jump and get unintentional reinforcement.

Forced relaxation is a great way to teach calm behavior. The calmer the dog, the easier and more enjoyable it is to be around your dog. Your friends will like you and your dog much better when they come over to your house and your dog does not jump all over them.

It’s hard to believe, but not everyone is a dog lover like you and me."
From: http://ultimatedogblog.com/who-else-wants-to-learn-a-little-known-dog-training-secret-inspired-by-a-former-russian-special-forces-instructor-2
___________________

The Secret To Teaching The Stay Command

"A lot of people have difficulty with the stay command and it is very easy to teach. The problem is the method the person uses to train this command.
So…     …I am going to share with you the Secret To Teaching The Stay Command.
“When you teach your dog stay, never try to control your dog. Control what your dog wants.”
That’s it. Now go teach your dog stay.
What’s that?
You want more information? You want me to demonstrate?"
Here is a video demonstrating how to control your dog by controlling what he wants: 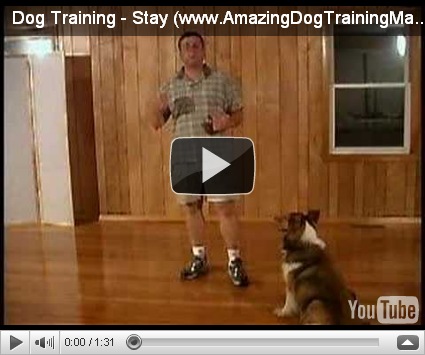 You can’t fool your dog!

"One of my clients use to “trick” his dog by saying “treat” instead of “come” because the dog wouldn’t come unless he had a treat in his hand. It worked for a time, but then eventually, the dog learned that “treat” didn’t always mean “treat” and because his owner didn’t have a true leadership role with the dog, the treat trick stopped working. The dog knew. And his owner had to find other means of getting his dog to come when called. Eventually he learned that he had to work on fulfilling the dog’s instinctual need to follow a scent (the driving force behind coming because he smelled a treat) and in turn, his respect for his owner’s leadership grew.

Remember this lesson as you work on your discipline with your dog. Don’t try to fool them into a behavior. Show your leadership through being honest and patient. Your dog will appreciate the respect of his mind."
From:  http://www.cesarsway.com/news/cesarspeaks/April-Fools-You-cant-fool-your-dog

Save And Release Lennox :    Sign the Petition
"Lennox was seized by Belfast City Dog Wardens and deemed to be 'of type', according to Section One, (BSL), of the Dangerous Dogs Act 1991. Lennox has never shown any cause for concern to a living soul. In his 5 years he has never had a complaint against him and his owners have complied to every law required by Belfast City Council." 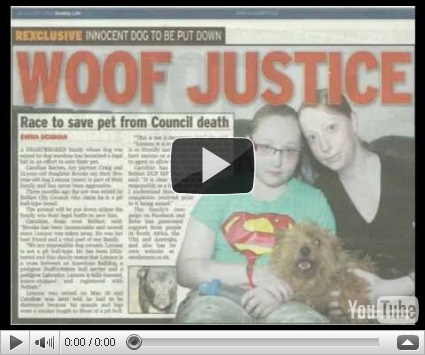 To:  The First and Deputy First Minister For Northern Ireland


"The undersigned give their signature in support and demand for the release of Lennox from council authorities who was wrongly removed from his loving family home simply for the way in which he looks. Lennox has never done any wrong yet he has still been branded as of “Pit bull Type” by people who are untrained and unsure what the pit bull breed looks like. Lennox is clearly an American Bull cross and has never shown any aggression toward anyone or anything. If a human was torn from his family home, locked up in inappropriate and unsuitable premises for the way in which he looked then we would deem it as racism and pure hatred, why do it to this beautiful animal? Free Lennox now as the eyes of the world are watching! "

*Below follows an extract from Lennox's owners: "Lennox is a loveable 5 year old family member. He's an American Bull dog cross that we have owned since he was a little pup. On Wednesday the 19th May 2010 he was taken from our family home by Belfast City Council as they believe he falls under the dangerous dogs act for Northern Ireland. The Council, without seeking any proper professional guidance declared Lennox to be a breed of "Pitbull Type" and so they wish to kill him simply because he has the appearance of said breed.
Lennox has never attacked anyone or anything yet the council have removed him from his home where he lives with my wife, myself, our 12 year old Daughter and his soul mate Juicy, a 2 year old female boxer. Belfast City Council are pressuring our family to sign him over to them to be destroyed however we feel the need to fight his case, he cannot speak but we will be his voice! If this was a human we would declare this racism. We ask every kind hearted person for your support, don't let them murder him."
Sincerely,     The Undersigned

Save Lennox: Posted by Victoria Stilwell- The Famous Dog Trainer.


"I have personally joined the fight to bring Lennox back to his loving home, having spoken at length by phone with his owner. After discussing the situation, I came away thoroughly impressed with what responsible dog owners Lennox's family are. I also developed an appreciation for his place in their family unit, as he serves as a therapy dog for the family's 12 year old daughter." From: http://positively.com/2011/03/31/save-lennox/

After doing some clean up in the yard, I will be taking a Social Security recipient shopping today.
Posted by LakeConroePenny,TX at 7:40 AM