This Kills Twice as Many People as AIDS – Why are Doctors Ignoring it?

Many people are still completely unaware of the many ways in which they are being manipulated into taking dangerous and unnecessary drugs.

There's the $5 billion direct-to-consumer marketing, of course, which is rather obvious. But physicians also play a major role, and the manipulation that takes place on this level is more obscure.

Drug reps often give 'gifts' to convince doctors to prescribe the medications that they represent. These drug reps usually have no medical or science education. Instead, they're armed with some of the most potent brainwashing techniques used throughout the world, which I'll discuss in a moment.

Perhaps the manipulation technique most difficult to detect is the 'education' given by doctors, to doctors.

Here, it's very easy to forget that the doctor presenting the material is working entirely on the drug company's behalf, and not as an independent, well-educated, appropriate source of objective information.

And then there's the insidious Drug Industry sponsored "education" that takes place in medical schools across the US.

For example, out of Harvard's 8,900 professors and lecturers, 1,600 admit that they or a family member have ties to drug companies that could bias their teaching or research. In 2008 alone the pharmaceutical industry contributed more than $11.5 million to Harvard for "research and continuing education classes."

All of these tactics (and others) are employed on a massive scale in the name of "education," but nothing could be further from the truth.


Is Your Doctor Paid to Promote a Drug?

Chances are your doctor has fallen prey to pharmaceutical marketing tactics. Most doctors simply do not have the time to research each drug, and rely heavily on information from their pharmaceutical reps and from other 'experts,' i.e. doctors who are receiving significant fees to talk about drug treatments.

Pharmaceutical sales reached a staggering $300 BILLION last year, up five percent from 2008. It's no secret that the industry spends big bucks on direct-to-consumer advertising, but just how much do they spend on marketing to doctors?

According to a new database created by ProPublica, seven drug companies paid $282 million to more than 17,000 doctors during 2009-2010.
The drug companies included in the database are:
Bear in mind that these seven represent just a small portion of the drug industry as a whole!

In 2006, the pharmaceutical industry spent an estimated $16 BILLION on physician advertising. At the time, that amounted to $10,000 for every doctor in the US.

How Does Drug Industry "Education" Help Protect and Improve Your Health?

The drug industry insists these payments are for "education," and improve patient care by keeping doctors up-to-date. However, I agree with those who call it bribery as it most definitely influences doctors' prescribing habits, which can have a seriously detrimental impact on their patients' health.

The truth is prescription drugs kill more than twice as many Americans as HIV/AIDS or suicide. Fewer die from accidents or diabetes than adverse drug reactions.

This will all change in 2013 under the new health care law, however.

BUSTED: This Popular "Independent" Health Website is Deceiving You

In a shocking report published earlier this year, BNET exposed how WebMD's online test for depression is rigged for profit:


"Feeling depressed? Cheer yourself up by taking WebMD's comical new depression test.
It's sponsored by Eli Lilly (LLY) — maker of the antidepressant Cymbalta – so they must know what they're talking about, right?
In fact, no matter which of the 10 answers you choose on the test, the result comes out the same:
You may be at risk for major depression."

But that's just the beginning. A number of questions about just how 'independent' a source WebMD is have since surfaced, and the answers are not what you'd expect.

WebMD has changed its Eli Lilly (LLY)-sponsored depression test so that not every answer results in a diagnosis of potential major depression. BNET noted on Feb. 22 that if you checked the “no” box to all 10 symptoms in the online quiz, the results page said, “You may be at risk for major depression,” and urged users to call a doctor “right away” if they were feeling suicidal.
From: http://www.bnet.com/blog/drug-business/webmd-caves-on-rigged-depression-test-not-everyone-is-suicidal-apparently/4300
and : http://articles.mercola.com/sites/articles/archive/2010/12/14/webmd-not-the-independent-health-source-you-expected.aspx

Diet and depression are linked, so eating right and not taking a bunch of chemicals is the way to go:

"It makes sense that if the fuel we are providing for our body, including our brains, is healthy, that our bodies will function more efficiently. We all know that diets higher in fiber, as well as low in saturated fats, contribute to better health overall.

In Houston yesterday, Jay and I drove around the Beltway 8, (Sam Houston Toll Road), to Hempstead Road and picked up the new-to-me flat screen monitor.   But the seller didn't work on them there, so I couldn't check it out, or my other "faint" one.  There was no way I was going to leave the "faint" one, as I didn't want to make that trip again.

We drove east across on West Tidwell, and turned north at I-45 to the wholesale RV store.  They didn't have anything that I wanted in stock, but I did get some Dicor RV caulk,  a new pair of dikes on sale,  (http://en.wikipedia.org/wiki/Diagonal_pliers),  and white Frijilok refrigerator door latches, normally $10, for 50 c.
I rarely use them for fridges, but they are very handy to have if you want to keep something like an RV medicine cabinet door closed!

The big Goodwill store that used to be on Little York Road had been closed down, so we hightailed it back to Conroe in time to get to St. Marks Thrift Shop before they closed at 2.00 PM.

They had one of these for $2, so I bought it for the cargo trailer:

"A 3-in-1 appliance, this mini toaster oven, griddle and coffee maker can warm or toast breads, heat pot pies, cook small-size frozen foods or cook an egg, hamburger patty, mini sausages or a pancake. It also brews 4 cups of coffee."

I also bought a very sturdy dog bowl, a folding cutting board, a neat paper towel holder, and a very nice long sleeve white/animals scrub top (for Adoption Days), and blew $3.25 for it all!

I am getting extravagant. 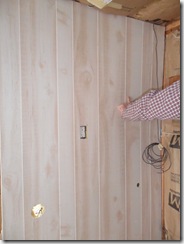 Ray installed the cable hatch, and tank filler with butyl putty tape and caulked around them.  We had a delay on installing the water tank filler.  (See hole in panel)

Jay and I carefully measured everything, and cut the first piece of paneling.  This panel was the most difficult, as it has 4 holes in it.  Water filler, city water, GFI outlet, and cable hatch.

Here it is dry fitted, and it worked out great.  This is in the kitchen area.

It was still only a high of 53, and there seemed to be a chilly north wind, but it was ENE and gusted up to 12 mph. today.
Posted by LakeConroePenny,TX at 5:30 PM

I never even fill a prescription until I check for "***, negative side effects" on the internet. I wish I had done that before I took Boniva for 10 months. That caused me untold problems, including high blood pressure and a frozen shoulder. I'm finally getting off the BP medicine, about 5 yrs later. I had to undergo a very painful shoulder operation, and have had problems with my jaws and teeth ever since taking Boniva. Why do people think a prescribed medicine works better than a natural supplement? In 1997 I had severe arthritis on my right side, but after 8 wks of glucosamine & chondroiting I am pain free. Now they are saying it doesn't work, so watch as one of the major drug companies introduces a new, expensive, designer drug for arthritis.

You said: "I had severe arthritis on my right side, but after 8 wks of glucosamine & chondroiting I am pain free. Now they are saying it doesn't work"

Someone better not tell my 15 year old cat that, Gypsy!
She wouldn't put her front leg on the ground. The vet said it was the worst arthritis she had ever seen.
Since Bobcat has been on glucosamine & chondroitin, she doesn't even limp.

So sorry you had to go through that, Gypsy.
I have never taken Boniva, but my doctor gave me some samples of another osteoporosis medicine that made me feel so bad, I was almost bedridden.
I haven't had to spend a day in bed since surgery, many, many years ago.

I'll stick to my calcium with D.
The D is very important, and so I also take extra D.

My Doctor's have tried for years to get me to take a drug for high cholesterol, but I keep refusing. I have heard so many horror stories about these drugs. I am taking 4 fish oil tabs a day and it seems to be bringing it down. They all take kick-backs.

Good for you! The statin drugs make me feel so bad that I just cannot take them. It is as if I am gradually getting paralysed from the neck down, so I know my body is objecting to it.

We don't need to add to Big Pharma's coffers, when there are natural remedies.