Get Out of the Tanning Bed! Freeze Coming. Breaker Box Woes.

"Get Your Daughters Out of the Tanning Bed!

’m not gonna lie. I have done it a few times, and my daughters do it way too much, despite my nagging about its negative health implications. Back-to-school season often includes dances and various other social events that lead to that urge to hit the tanning booth. It’s a quick fix for that fast-fading summer tan. But tanning beds aren’t without their complications: A recent press release by the American Academy of Dermatology (AAD) notes that indoor tanning beds can “raise the risk of getting melanoma, the deadliest form of skin cancer, by 75 percent.”

My daughters argue that it is safer than the sun. The AAD refutes this, pointing out that the amount of ultraviolet radiation produced from tanning beds is the same as from the sun, if not stronger. To this end, the United States Department of Health and Human Services and the International Agency of Research on Cancer have declared that UV radiation from artificial light sources such as tanning beds and sun lamps is now considered a known carcinogen.

In the past, I would go “tanning” right before a vacation, convincing myself that with a base, I wouldn’t burn on the beach. Many young women partake in indoor tanning to prepare for dances and parties; unfortunately, our culture seems to be one that many of us think we look better with sun-kissed skin. Statistics indicate that annually, about 28 million people in the U.S. tan indoors, with 2.3 million of those being teens.

As parents, it is our responsibility to impart the truth about tanning beds to our kids. There are plenty of sunless tanning lotions and sprays out that work (gone are the days of orange skin with exaggerated brownish-orange blotches on elbows and knees). And most experts agree that sunless tanning products are safe, and the end results look pretty good if applied correctly. Just follow the directions carefully.

It’s time to get our kids out of the tanning booth. Please share your thoughts on how to do just that."
From:  http://www.everydayhealth.com/blog/the-organized-caregiver/get-your-daughters-out-of-the-tanning-bed/?xid=nl_EverydayHealthinCoordinationWithFDAFoodDrugandMedicalProductSafety_20101020
____________________

"Tanning beds are not safe. Both UVA and UVB rays cause cancer. Tanning beds often exceed “safe” UV limits, despite the claims of the salon. Teens are at special risk because their bodies are undergoing such accelerated growth rates that their cells are more prone to the damage of the UV radiation.
By routinely tanning their skin starting at a young age, teens put themselves at greater lifetime risk of developing skin cancer. Contrary to popular belief, it is possible to get a sunburn in a tanning bed, and your eyes are at an increased risk of developing cataracts and corneal burns.

From USA Today:
"But as use of tanning beds has increased among people under 30, doctors have seen a parallel rise in the numbers of young people with skin cancer. In Britain, melanoma, the deadliest kind of skin cancer, is now the leading cancer diagnosed in women in their 20s. Normally, skin cancer rates are highest in people over 75."

As it is going to go below freezing for the next couple of nights, Jay and I watered all the plants before we turned off the outside faucets at their main cutoff, and covered up the plants, again.  I don't mind, as we have 70 deg. days in between the cold ones.

It was really too chilly with icy winds to work outside, so we tackled a job which has been waiting to be done for years.
When I bought the 50 amp Airstream motor home, we used the double throw 220v. space in the breaker box which were for my 220v. house heater, for the two 110v. breakers going to the 50 amp dedicated circuit outside.  When the Airstream left here, we took all that wiring out, but never replaced the 220v. breaker.  The local electrician has been saying that he would come and fix it, but never did, so I have been without my 220v. heater all these years, and just used some 110v oil filled radiators.
Now I would like it to be more cozy inside! 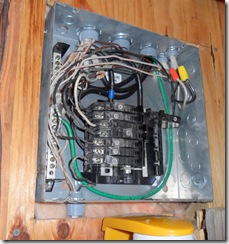 This is an auxiliary breaker box off my main one, which the contractors added when they finished the front part of the house.

It didn't work.   Jay found out that they had used an old breaker box with the tabs broken that are supposed to hold the buss bar in the box, so the breakers won't stay in place.  They had just held it all together with the breaker box cover, and hoped for the best!   Now, I remember having a problem with it when we replaced the breakers before.  We asked Ray over here, for a second opinion, and he affirmed that we have to tear the wall out, and replace the breaker box.

Oh, well, tomorrow is another day!

Posted by LakeConroePenny,TX at 1:29 PM

I wonder how long this cold weather is going to last. We thought about going further south, but I think it is cool down there too. Stay safe.

But it will be up in the 70's again on Wednesday and Thursday. That's TX winter.
Usually, even when it is cold, the sun is shining.