Help Feed A Mom. Be A Responsible 'Parent', To Neuter Is Cuter. Cargo Trailer. George is Back!

When I first saw this, I thought it was a scam of someone needing to feed their cat, who should have been spayed, anyway:
"Help Feed A Mom Cat & Kittens Cat Food, Litter, Cat Toy

"
Then I saw that it is Rescue:

"About this nonprofit:
Saved Whiskers Rescue Organization Inc. (SWRO) is a humane organization that rescues abused, abandoned and homeless cats and kittens in New Jersey and the surrounding Delaware Valley -- dedicated to providing veterinary care and shelter in private foster homes until a permanent home of a responsible cat owner is found." 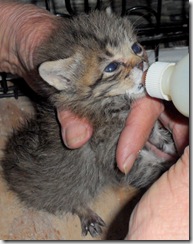 When I read that, little did I know that I would be bottle feeding three little orphan kittens so soon !
As an SPCA foster mom, I have to feed, house, and supply everything for my fosters, all who have arrived here because of their previous owner's irresponsible care.

This is a picture of one of my orphan kittens, "Pebbles".

Why sterilize your dog? Why not?   Myths abound!   Here are the facts:

IT CAN INCREASE YOUR PET'S LIFE EXPECTANCY.
Spaying eliminates uterine infection and reduces the risk of mammary cancer. Neutering prevents testicular and prostate cancer. In addition to the health benefits, your pet won't face the danger of being in fights, run over or exposed to diseases while on the prowl in search of a mate. More at: http://www.diamondsintheruff.com/whyspayneuter.html
____________________

Spaying and neutering has a number of benefits to your pet. Besides reducing the pet overpopulation problem. Research studies have shown that a spayed or neutered pet lives an average of 2 years longer than their unspayed or unneutered counterparts.
-----------------

Spaying female dogs prevents:
50,000 puppies being born in 10 years from one dog.

Mammary tumors
Once your dog has gone through a single heat cycle, her chances for developing cancerous mammary masses increase by 98%. Spaying her before her first heat eliminates this possibility.

Pyometra
In layman’s terms, this is an infected uterus. This is a very serious condition that will affect almost all unsprayed females over the age of five. Pyometra can and will result in death if not taken care of immediately – the cure is surgical removal of the infected uterus, which is often 2-3 times more expensive that a routine spay.

C-section for difficult birth
Not all pregnancies end with a happy picture, some females need emergency care while delivering. C-sections can cost thousands of dollars at emergency facilities, and failing to assist the mother can often lead to death of the mother and pups.

Injury
95% of dogs hit by cars are unspayed or unneutered. When in heat, a female dog will often run away from her home in search of a mate. In addition, many dogs will get into fights or get injured while breeding.
------------------
Spaying female cats prevents:
400 kittens being born in the next 10 years for each cat!
Contagious diseases
Most of the deadly viruses cats get are spread through saliva or other bodily fluids.

Spraying and Inappropriate Urination
Unspayed females advertise their condition by urinating in different areas outside of the litterbox, which can include spraying on vertical surfaces to mark their territory.

Malnutrition
Female cats in heat burn a lot of calories and often lose weight or develop other metabolic disorders.

Injury
Even well-behaved strictly indoor cats will find ways to get out of the house when in heat, putting them at risk for being attacked by other animals or hit by cars.

-------------
Neutering Male Dogs and Cats Prevents:
Many more pets than there are good homes, being born.
Cancer
A neutered male does not develop testicular cancer and male dogs are far less prone too developing prostate or rectal cancer if neutered, neutered males do not develop preianal hernias.

Behavioral Problems
Unneutered males (both canine and feline) tend to be more aggressive with other animals and people. Unneutered males are also very prone to urinating or spraying (cats) inappropriately. Thousands of dogs and casts get relinquished to shelters every year for inappropriate behaviors like these.

We started out the day in tank tops as it was muggy, overcast and humid.  We were measuring and fiddling with the closet in the cargo trailer.  We were just going to rip a board for a stile, when the rains came, so we went indoors and removed the mount for the B&D under-cabinet toaster that I had taken out.
Then it cleared up, so we went back outside and ripped the board on the table saw, and were measuring, and fitting the stiles for the closet.  By that time it had cooled off considerably and we had to put on sweaters!
We didn't make enough progress to take a picture.
----------------

I just have this to say about spaying and neutering:

After what I went through with Misty, I advise everyone not to let their pet, or their pocketbook, suffer like this.        Get your females spayed.

If Misty's late "Dad", had had her spayed years ago, she would not have developed Pyometra.

"Pyometra is an important disease to be aware of for any dog owner because of the sudden nature of the disease and the deadly consequences if left untreated. It has been compared to acute appendicitis in humans, because both are essentially empyemas within an abdominal organ."
From:  http://en.wikipedia.org/wiki/Pyometra
"In layman’s terms, this is an infected uterus. This is a very serious condition that will affect almost all unspayed females over the age of five.
Pyometra can and will result in death if not taken care of immediately – the cure is surgical removal of the infected uterus, which is often 2-3 times more expensive that a routine spay."

Misty had breast tumors also, which spaying should have eliminated.
Misty's Pyometra surgery was over $800!

It came on so suddenly that if I hadn't been watching her, she would have died that day.
Posted by LakeConroePenny,TX at 2:41 PM

You got rain? Dang, here in Cut & Shoot it just got dark and the wind blew real hard. My bass are leaving dust trials when they try to swim too fast. Need rain!!!!

Oh, Dizzy-Dick, it was just a teaser.
Didn't rain long enough to do any good.

Sorry about your bass. If you train them to swim in straight lines, they could till the furrows in your garden.