Nothing much has been going on for the last couple of days. The rain teases us, but not enough to water the grass. Then the sun comes out and scorches it. The plants on the porch were getting thirsty, so I had to tend to them. At least Minkie isn't home yet, she likes to eat them !

Yesterday, I taped up the right hand side surround, and gasket, on the left back door window of the Little Van. We took that window out, as it is an opening window, so that Ray could get to it easier to spray it. It has a black rubber gasket around it, 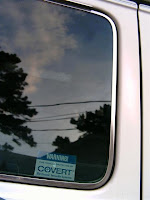 and we didn't want paint getting on that. He painted several places 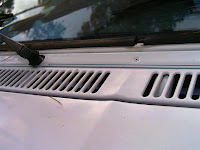 where the primer was showing. Just like little rocks had hit it. If you can't see what we did, then I guess we did OK. Now I see a pink tinge in the pictures, we didn't do that, it is the sun going down.

I finally had to drive into the next town today. I had been putting it off, hoping that I could pick up Minkie, the kitten that didn't get adopted, at the same time. But Kenya's van still isn't fixed right. The person that rear ended her has Geico Insurance, and they only have certain places where you can get your car fixed. That is all the way down in Houston. First, Kenya went to pick it up, and it would only go more than 20 miles an hour. She took it back, and had to have the gas tank removed, and fuel pump and filter replaced from all the bits that they knocked loose when they were getting her bumper off. Geico wouldn't pay for that. Then she goes back to Houston to get it, and it sounded like a freight train. All this has messed up the catalytic converter, and Geico won't pay for that either. The accident also buggered up the power door lock on her back door. Now this is a new van, just 6 months old, and she is having to pay for all this extra stuff that was inadvertantly caused by the accident. That is the way insurance companies work, I guess. Then the dealership is making several hundred dollars more off her. It is all a big rip off ! She is lost without her wheels, but she wants it to run right when she gets it back.

I went to my insurance company and went over some policies. I have three vehicles that I don't drive, but had full insurance on them. I got them switched to Comprehensive only, so that they will be covered for theft, falling trees, aircraft and whatnot, but can't be driven on the road. That should save me quite a bit each month. I have no intention of driving them any time soon.

I actually got to WalMart today, and got some stuff returned, and bought. There are some things that I just like to get from there, like their Great Value coffee. Especially, their Great Value 100% Colombian Decaffeinated coffee. It doesn't taste yucky like most 'unleaded' coffee, but I only make 2 mugs (4 cups) at a time, and use one scoop. It is bitter if too strong.

Then I stopped at our local Krogers, and picked up a few food bargains there, and came home. I could have gone thrift shopping, but I just wasn't in the mood. I have everything for the projects I am doing right now.

Just a "rat-killing " day.
Posted by LakeConroePenny,TX at 8:29 PM