The HiLo Travel Trailer. Tall Aloe Plants. Minkie is Back.

Ray and I been doing a little bit some mornings, as it gets too hot to work in the afternoon. So this post is about the last few days. I have been grooming too. Also having a terribly slow time messing with eBay, everybody and his dog, must have been listing !


Ebay Motors was having a sale on listing fees, $1.00, but the final value fee will be higher. I guess they have to make it up somewhere. So I re-listed the Class B. (There were 97 Class B's listed on there last time I looked). Ray got up on the roof and took a picture of the solar panel, so I could have a picture of it in the listing, instead of just talking about it. It is rare that a B is this well equipped, and maybe that will help the bidding go up to my reserve this time. 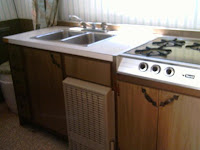 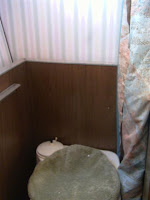 I thought that maybe I could get the vintage HiLo listed during the sale, so Ray and I started to work on it. But I knew that we couldn't get it ready in time, once we started. We finally got the double sink in, and put the recirculating toilet back in. Note, I even found a toilet seat cover to match at a thrift shop. The final plumbing isn't done, but we will do that next. We installed the cellular blinds that I had bought for it, 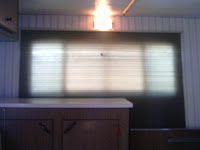 new on sale at Lowes. Someone had ordered them, and not picked them up. The colors are exactly the same as the upholstery. Avocado for the rear window, 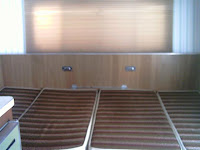 and tannish beige for the front window.


They are not the Day/Night type, but they match great. The last picture is with the dinette made into a bed. There is another couch/bed on the side by the back window, in front of the closet. It is only 18' and a big kitchen for such a small RV. Even the 40 year old gas/electric fridge works.


On Saturday, after Adoption Day, I picked up Minkie. I don't think that anyone has even put an application for her yet. We are all amazed at that, as she is the sweet, loving, gentle, purring little cat. I couldn't see her being alone in the grooming room, so let her live in the house with Bobcat and me. She is so good, and even though she wants to go in the grooming room each day, to look for Boots, she seems very happy. Bobcat is mad at me for having this other young cat living in the house, even though she doesn't mind her sharing the screen porch in the mornings. They have always done that. I saw little six-toed kitten,"Tote" ,when I was picking up Minkie. He is so cute. They named him that, as I found him zipped up in an athletic bag, thrown away, left to die, at the dumpsters. He has already been neutered, vaccinated, and ready for adoption.


Speaking of the screen porch, I was surprised when I was watering the plants. Some of the aloe have grown to over 30" tall, are busting out of their pots, and have had a bunch of "pups". Maybe I ought look into getting them spayed or neutered, too ! Now, I had always intended to sell a lot of them, but just never got around to advertising them. I am running out of big pots, so I took a bunch of photos, and got some listed on eBay. I don't know what will become of it, but I know they sell there. I have got to find the time to tend to them, and get some re-potted.


I need a potting day.
Posted by LakeConroePenny,TX at 9:03 PM