Nipping Puppy Biting in the Bud 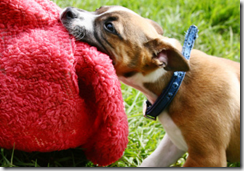 "It is often a challenge to convince a new enthusiastic puppy not to bite the hand that feeds him, pets him, and plays with him. Nipping and mouthing is a very common and very normal puppy behavior.

When puppies play with each other, they use their mouths, so they tend to do the same thing when they interact with people. This is rarely an aggressive behavior intended to harm you, but it can be a difficult habit to break without some good, practical tools in your “puppy training tool bag.”

The worst thing you can do is physically punish your pup for this natural behavior, although many people incorrectly do so.

Most normal puppy mouthiness just goes away on its own, regardless of how much or how little puppy parents do to stop it, once puppies acquire their adult teeth

Instead of punishment, the use of positive distraction and the encouragement of acceptable behavior are far better approaches, yielding much better results. This article is intended to help you manage puppy nipping effectively, while at the same time helping you build a good relationship with your puppy, based on trust rather than fear."    More at: http://healthypets.mercola.com/sites/healthypets/archive/2009/08/13/nipping-puppy-biting-in-the-bud.aspx

Don’t Make This Tragic Mistake When Your Dog Misbehaves

"This is a sickening, heart-wrenching story I’d rather not repeat, but there’s an important message in it, so I hope you’ll bear with me. 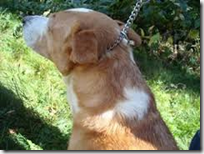 A one year-old dog was injured so severely by misuse of a choke collar that he had to be euthanized. The owner suspended the dog a few feet off the ground with a choke collar for a full minute as a disciplinary tactic. When the dog was lowered to the ground, he was panicked and ultimately lost consciousness.

An exam at the veterinary clinic where the dog was taken showed brain injury and severe brain swelling. The ultimate diagnosis was strangulation and the dog’s injuries were so severe he had to be euthanized.

The goal is to use very small-sized treats (pea sized is good, and you can even use frozen peas if your dog seems to like them) and verbal praise and affection to encourage desired behaviors in your dog.

"Everyone realizes there’s a big difference between a well-mannered canine citizen and an unpredictable, out-of-control dog. But often dog owners develop bad training habits without realizing it, and are left feeling confused and concerned about their dog’s uncooperative behavior."  Article at: http://healthypets.mercola.com/sites/healthypets/archive/2013/11/29/10-dog-training-tips.aspx

10 Tips to Keep Your Pet Safe in Cold Weather

"Depending on where you live, you’re bracing for another winter of ice, snow and frigid temperatures. But before we all find our own ways to weather the chill for the next few months, it’s a good time to remember the importance of keeping furry family members as safe, warm and comfortable as we are. 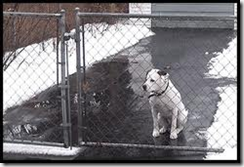 Here are some things you can do to keep the four-legged members of your family warm and safe:"  More at: http://healthypets.mercola.com/sites/healthypets/archive/2013/12/20/cold-weather-pet-safety-tips.aspx

"Walmart's meat suppliers have been under intense scrutiny for their treatment of animals, and this is the fourth undercover investigation regarding the chain's pork suppliers by the group. First very upsetting video, Hidden-camera footage from another farm  that supplies pork to the retailer was released last month that allegedly showed pigs confined to gestation crates and workers throwing piglets on their heads.

From me:  I sometimes wonder if The Lord told us not to eat pork in Leviticus 11, because he knew how much the pigs would have to suffer to be in our food chain.  Apart from that:

"Every animal has its purpose. Scavengers, such as pigs, are designed to clean—not to be eaten by humans, only by other carnivorous animals.

A pig’s digestive system—unlike a cow’s—is not designed to filter toxins from its system. These toxins work their way through the pig and are deposited in the animal’s flesh—especially in its fat. The pig itself is actually able to sustain very high levels of toxins. As such, it can eat just about anything. In an effort to keep feed costs down, pig farmers will purchase garbage, such as rotting meat and vegetables, to feed them—and the pigs can be sustained with it. There is nothing in the pig’s digestive system, or the processing of the meat, that removes these toxins.

Some of the “cleaning” features of the pig are remarkable. One is located under its hooves. Often referred to as poison ducts or running sores, these “sores” act as a conduit for poisons to ooze from the pig’s body. This is one reason pigs can eat poisonous snakes that would kill other creatures and not be affected themselves. These ducts, however, will often become “plugged” from the amount of toxins pigs must excrete from their bodies. If this is the case, a farmer must quickly slaughter the pig and send it to market before it dies. Accordingly, the meat from such an animal is riddled with parasites and toxins.

The toxicity of the pig is not just limited to its meat and organs. Even its saliva can be horribly infectious. In fact, one disease, called “mad itch,” will cause a cow to rub all the skin from its mouth—to the point of killing itself. All that is required for cows to contract this disease is to come in contact with the residue of a pig’s saliva on shared food supplies!"  More at: http://realtruth.org/articles/263-apt.html

Even Joel Osteen has switched to turkey bacon:

"A pig is a real garbage gut. It will eat anything including urine, excrement, dirt, decaying animal flesh, maggots, or decaying vegetables. They will even eat the cancerous growths off other pigs or animals.  The meat and fat of a pig absorbs toxins like a sponge. Their meat can be 30 times more toxic than beef or venison.

The pig is so poisonous and filthy, that nature had to prepare him a sewer line or canal running down each leg with an outlet in the bottom of the foot. Out of this hole oozes pus and filth his body cannot pass into its system fast enough. Some of this pus gets into the meat of the pig."  From: http://www.9jabook.com/forum/topics/15-things-you-should-know-about-pigs-their-meat 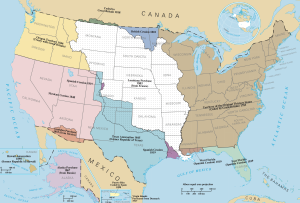 Territorial expansion of the United States, the Gadsden Purchase shown in red-orange.

The border between Mexico and the United States spans six Mexican states and four U.S. states, and has over twenty commercial railroad crossings.

"James Gadsden, the U.S. minister to Mexico, and General Antonio Lopez de Santa Anna, the president of Mexico, sign the Gadsden Purchase in Mexico City. The treaty settled the dispute over the location of the Mexican border west of El Paso, Texas, and established the final boundaries of the southern United States. For the price of $15 million, later reduced to $10 million, the United States acquired approximately 30,000 square miles of land in what is now southern New Mexico and Arizona.

Jefferson Davis, the U.S. secretary of war under President Franklin Pierce, had sent Gadsden to negotiate with Santa Anna for the land, which was deemed by a group of political and industrial leaders to be a highly strategic location for the construction of the southern transcontinental railroad.

It was James Gadsden who was influential in the convention’s recommending a southern route for the proposed railroad, beginning in Texas and ending in San Diego or Mazatlán. Southerners hoped that such a route would ensure southern prosperity while opening the “West to southern influence and settlement.”"

After substantial evidence of Marcos' corruption emerged, including the looting of billions of dollars from the Philippine economy, Marcos and his wife were indicted by the U.S. government on embezzlement charges. After Ferdinand Marcos' death in 1989, Imelda was cleared of the charges, and she was allowed to return to the Philippines in 1991, where she unsuccessfully ran for the presidency the following year.

In 1993, Imelda Marcos was convicted of corruption by a Philippine court, but she avoided serving her 12-year prison sentence. In 1995, she was elected to the House of Representatives. In 1998, she unsuccessfully ran for president again and subsequently retired from political life."

Imelda Marcos loses her collection of 2,700 pairs of shoes:

Jay came here and wanted to work on something, he was getting bored staying at home.

He won't wear his sling even though he is supposed to have a broken right arm, so he was able to cut some lattice with my lightweight circular saw, and we completed two sections of one of the cross fences yesterday.

Posted by LakeConroePenny,TX at 7:34 AM