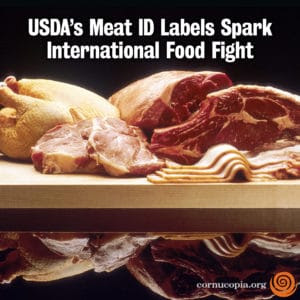 "Most Americans don’t know where their chicken, beef and pork were born, raised and slaughtered, but a new rule now requires that labeling. Supporters say it educates consumers. But critics, including major meat companies, say it’s a costly and unnecessary protectionist measure.

Cargill and Tyson Foods (TSN), as well as their allies among meatpacking and major ranching associations, are locking horns with the Consumer Federation of America, farmers and small-to-midsize ranchers’ groups over the country of origin label rule, known in shorthand as COOL.

The COOL rule, which went into effect in November, requires more specific meat labels. It also bars commingling meat for everything except ground beef, by requiring all meat in a package to come from the same source. That will require new infrastructure to segregate cattle, swine and poultry from different countries.

Farmers’ associations and some ranchers’ groups say the rule keeps shoppers informed, much like grass-fed and organic labels.

“The consumer knows best,” Jess Peterson, executive vice president of U.S. Cattlemen’s Association, said. “They ought to know where their cattle are coming from.”  More at: http://www.cornucopia.org/2013/11/usdas-meat-id-labels-spark-international-food-fight/

Why You Need Wheat Germ

"Wheat germ is the most vitamin- and mineral-rich part of the wheat kernel. In fact, the germ is actually the embryo of the wheat plant. This embryo will eventually nourish the new wheat plan. This is the reason why it has so many wonderful nutrients.

Unfortunately, this kernel, which includes the wheat germ, is tragically removed during the refining of whole wheat grains to white flour. In the manufacturing process, it is removed because its healthy oils can go rancid quickly, so removing it makes it easier for food production companies to keep wheat in storage much longer. The germ itself only makes up about 3% of the kernel, and you need over 50 pounds of wheat to get one pound of wheat germ.

Why Is Wheat Germ So Good for You?

Because it is meant to feed the new plant, wheat germ is packed with good nutrients. Two tablespoons of raw wheat germ have about 1.5 grams of unsaturated fat, 9 grams of carbohydrates, 4 grams of protein, 2 grams dietary fiber, 2 grams of sugars, no cholesterol and about 60 calories. This is plenty of protein and fiber.

Plus, it has a number of other healthy nutrients for your body:

Wheat germ is packed with important B vitamins, such as folate, vitamin B1 (thiamin) and vitamin B6. B vitamins are important for the heart, to make proper mood chemicals for our brain, and are critical for cardiovascular health.

"Neither one is fun to experience, but there are some key differences between food allergies and digestive problems. One example: With a food allergy, you might get hives but you probably won't with a digestive condition."

"If you notice a reaction when you eat certain types of foods, talk to your primary care physician. If he suspects a food allergy, you may be referred to an allergist who can determine whether you are allergic to certain food allergens or if you have an intolerance. Either way, your doctors can help come up with a plan to avoid the food and manage the symptoms when and if a reaction occurs.

You should do this sooner than later. Fear of having a reaction to foods can keep you from enjoying dinners out in restaurants or dinner parties with friends. The sooner you know what the problem is, you can begin correcting it, and get both your diet and your social life back into gear."  From: http://www.everydayhealth.com/allergies/food-allergies-and-digestive-problems.aspx

On this day, President Roosevelt—convinced on the basis of intelligence reports that the Japanese fleet is headed for Thailand, not the United States—telegrams Emperor Hirohito with the request that "for the sake of humanity," the emperor intervene "to prevent further death and destruction in the world."

The Royal Australian Air Force had sighted Japanese escorts, cruisers, and destroyers on patrol near the Malayan coast, south of Cape Cambodia. An Aussie pilot managed to radio that it looked as if the Japanese warships were headed for Thailand—just before he was shot down by the Japanese. Back in England, Prime Minister Churchill called a meeting of his chiefs of staff to discuss the crisis. While reports were coming in describing Thailand as the Japanese destination, they began to question whether it could have been a diversion. British intelligence had intercepted the Japanese code "Raffles," a warning to the Japanese fleet to be on alert—but for what?

Britain was already preparing Operation Matador, the launching of their 11th Indian Division into Thailand to meet the presumed Japanese invasion force. But at the last minute, Air Marshall Brooke-Popham received word not to cross the Thai border for fear that it would provoke a Japanese attack if, in fact, the warship movement was merely a bluff.

Meanwhile, 600 miles northwest of Hawaii, Admiral Yamamoto, commander of the Japanese fleet, announced to his men: "The rise or fall of the empire depends upon this battle. Everyone will do his duty with utmost efforts." Thailand was, in fact, a bluff. Pearl Harbor in Oahu, Hawaii was confirmed for Yamamoto as the Japanese target, after the Japanese consul in Hawaii had reported to Tokyo that a significant portion of the U.S. Pacific fleet would be anchored in the harbor—sitting ducks. The following morning, Sunday, December 7, was a good day to begin a raid.

"The son of man has just sent his final message to the son of God," FDR joked to Eleanor after sending off his telegram to Hirohito, who in the Shinto tradition of Japan was deemed a god. As he enjoyed his stamp collection and chatted with Harry Hopkins, his personal adviser, news reached him of Japan's formal rejection of America's 10-point proposals for peace and an end to economic sanctions and the oil embargo placed on the Axis power. "This means war," the president declared. Hopkins recommended an American first strike. "No, we can't do that," Roosevelt countered. "We are a democracy and a peaceful people.""

"South Africa's first black president and anti-apartheid icon Nelson Mandela has died at the age of 95.  Mr. Mandela led South Africa's transition from white-minority rule in the 1990s, after 27 years in prison for his political activities.

"Our nation has lost its greatest son," Mr. Zuma said.  "Although we knew that this day would come, nothing can diminish our sense of a profound and enduring loss."  More at: http://www.bbc.co.uk/news/world-africa-25249520

After another search in the Grooming Room, trying to find all the hidden cat toys, Ray and I pronounced the room good for Mindi's dogs.  The cats have little lightweight plastic ball toys with bells in them and toys with feathery things that the dogs might choke on.  So now, the heavy duty doggie toys are in there. 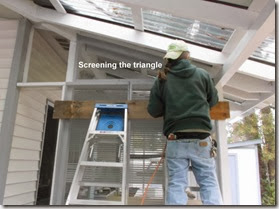 Then we went outside in the 40+° weather to put up the last piece of screen.  We screwed a temporary board across the side of the porch, to work on the top triangle.  That was so that we can have both 8' ladders leaning against the part that is already screened.  First, we had to take measurements, so it was easier with each of us on a ladder.   After we had cut the screen, it was much simpler with two of us to staple it in place.  That was all we could do, as it was getting too windy and chilly.   All the porch is now screened, but it was too cold for the cats to go out there.

Mindi's dogs arrived at 2.00 AM, and I was shocked when I saw the oldest, Punkie. I have known these dogs for 15 years.  She was as skinny as a rail, all hunchbacked and could hardly walk.  Mindi's husband was so surprised when he saw my Misty, who is plump, spry, sassy, and two years older than Punkie.  Mindi said that she knew that Punkie was on her last legs, and I was afraid that she wouldn't last the night.

She can't see very well, so the first thing I did was cut off her bangs. Then, I quickly set up a 'hospital' cage for her, and fed her some canned Wellness, which she enthusiastically ate.  Two hours later, I took them all outside, and carried Punkie out there.  She peed, and when I put her back in the cage, I gave her some more Wellness and a little Spirulina, http://www.dogsnaturallymagazine.com/benefits-of-spirulina/ .  I am going to try to make sure that nothing happens to Punkie while she is in my care for the next few days.

Posted by LakeConroePenny,TX at 7:01 AM

I hate to see a dog suffer. I know she is in good hands with you. I am positive that you will make her as comfortable as possible.