For "Summary Saturday", News, some new, some old:

How these Russians got a car out of the river!

"You got to hand it to them, they got the job done."

"Scientist Arlene Blum speaks about the connection between plastic pollution and flame retardants."

Dr. Oz even had a show about it this week:  "Is your sofa making you sick?"  http://www.doctoroz.com/episode/toxic-flame-retardants-your-home-right-now

"Stacy Malkan, the leader of the Campaign for Safe Cosmetics, speaks about the connection between plastic pollution and cosmetics. There are toxins even in Johnson's Baby Shampoo!!"

"Ken Cook, president of EWG, speaks of the toxic chemicals leaching into our bodies from plastic containers, plastic packaging and plastic pollution."

"You can’t judge a book by its cover. And if in 1961 you happened to be standing in the wind-battered cow pasture on the shores of Clear Lake, just southeast of downtown Houston, you could be forgiven for not believing that in a few short years, this would be the future home of an elite cadre of scientists and airmen, destined to leave this planet and set foot on another world.

This year marks the 50th anniversary since NASA’s Johnson Space Center – originally named the Manned Spacecraft Center – opened its doors.  As recently told to the Houston Chronicle, the effort to land the nation’s premiere space center in Houston was not your typical application process.  But thanks to the foresight of a group of Houston businessmen and the deft political maneuvering of one powerful Texas politician, Space City was born.

Interestingly, it wasn’t the politician whose name the Center now bears.  Rather, it was longtime Houston Congressman Albert Thomas.  As NASA’s site selection committee contemplated Baton Rouge, Jacksonville, Tampa, and even San Francisco, Thomas used his influence on the House Appropriations Committee to bring NASA to Houston.

In the intervening years, Houston has become synonymous with humankind’s exploration of space.  As the home of Mission Control and the training facility for the Astronaut Corps, humanity’s progress into the vast unknown has, quite literally, been led by Texans.  From the days of Project Gemini, when San Antonio native Lt. Col. Ed White became the first American to perform a spacewalk, to the Apollo era, which brought mankind to a new world, and on through the Space Shuttle program and it’s enduring legacy, the International Space Station, Texans have pioneered the celestial frontier.

As anyone living in Clear Lake and the surrounding area knows, these remarkable men and women are not only explorers, scientists, and engineers at the tops of their fields: they are friends and neighbors, fellow congregants at churches, and parents cheering on the local little league team.  Over the last five decades, Houstonians have shared in the triumphs and tragedies that have befallen the NASA community.  The city rejoices with each safe return to Earth of its fellow Texans, and it grieves deeply when they are taken away by the ever-present dangers of spaceflight.

Americans of all ages look to NASA for inspiration.  We see in our astronauts the manifestation of the highest ideals of the American spirit: forging ahead into a new and dangerous frontier in the courageous pursuit of knowledge.  The achievements of the last 50 years have been breathtaking.  Now, as we move beyond the Space Shuttle program and into a new era of exploration, the world will once again look to Texas for its bold leadership into space." Sources: Houston Chronicle, NASA

"In a final step signifying the dismemberment of the Soviet Union, 11 of the 12 Soviet republics declare that they are forming the Commonwealth of Independent States (CIS). Just a few days later, Soviet leader Mikhail Gorbachev announced he was stepping down from his position. The Soviet Union ceased to exist. 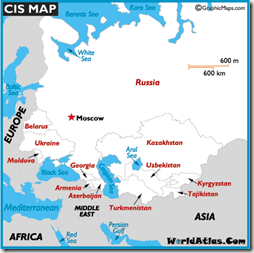 Only Georgia, embroiled in a civil war, abstained from participation. Exactly what they created was open to debate. The CIS was not a new nation, but merely an "alliance" between independent states. The political meaning of the alliance was hazy. The independent states each took over the former Soviet government facilities within their borders.

The military side of the CIS was even more confusing. They agreed to sustain any arms agreements signed by the former Soviet Union. The former Soviet defense minister would retain control over the military until the CIS could agree on what to do with the nuclear weapons and conventional forces within their borders. Complicating the situation were terrific economic problems and outbreaks of ethnic violence in the new republics.

For Gorbachev, the announcement was the final signal that his power—and the existence of the Soviet Union—was at an end. Four days later, on Christmas Day, he announced his resignation."

As I was going to have lunch with my ex-daughter-in-law Becky, who has cancer again, I was busy all morning printing out all the info that I had gathered about the treatment she wants to get. Hyperthermia therapy, http://en.wikipedia.org/wiki/Hyperthermia_therapy .

We met at Bing's Asian Bistro, but found that they were closed for a special function, so we drove back into Willis, and went to the Mexican restaurant, "Los Pericos". (The Small Parrot or Parakeet)  Their food and service is always good. 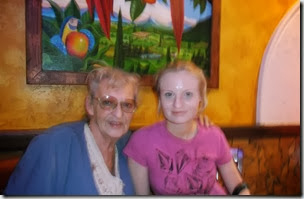 My granddaughter, Michelle, Becky's daughter, met us there, too.

Becky was very interested when I showed her that The University of Texas Health Science Center in Houston is having clinical trials of Hyperthermia Cancer Therapy now.  And it isn't the only university doing that around here, either, there are more in Houston and Galveston. 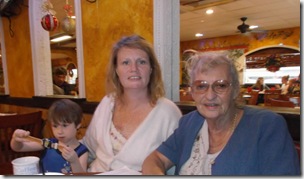 Becky's little son, Karson was with her.  She is in good spirits for a young person with a terminal prognosis.   This last batch of chemo is taking a toll on her hair and body, such a shame.  We discussed what she was doing for her cancer, and exchanged other information about diet and remedies that we had gleaned from the internet.

All too soon, we each had to go our separate ways, after having a great day.

Posted by LakeConroePenny,TX at 7:46 AM